MMU2 loads to extruder but no further

MMU2 loads to extruder but no further

I have adjusted the MMU2 to load to the proper position to the extruder but when the extruder starts turning there is a grinding sound and it doesnt push down to the hot end.  It seems to me that the bondtech might be to far to right towards the path (or in perspective of the picture too far forward) but I dont see a way to adjust that.  see attached picture with a 1.5 allen key that doesnt even pass into the bottom tube. 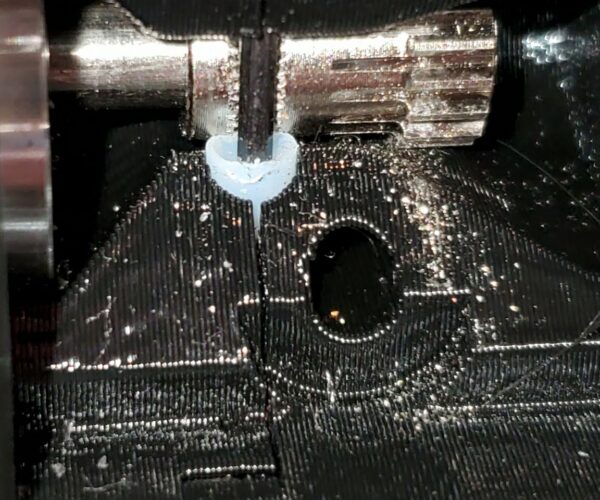 Isn't this the Mk3S extruder, that should mean that you should also have an MMU2S  (if I remember corectly, the difference between MMU2 and MMU2s is the filament buffers AND THE FIRMWARE) have you updated the MMU2 firmware to MMU2S?

Have you updated the Mk3S up to the latest version of firmware to match?

looking at the Allen Key, there might be a tiny slope to the right.  you could loosen the bondtech and sort that.

there also seems to be a dent in the top of the PTFE towards the front,   ths could have been caused by pulling filament out through the idler door openning, or poking things down the filament path when the idler door is open, but is unlikely to be due to the bondtech gear being too close to the idler door. there may be a ttiny bit of  slack in the motor housing and screw holes, but probably won't be enough to make a significant difference.

Have you adjusted the feed distance so that the filament is just entering the gears when the MMU motor stops pushing the filament? if the MMU and the extruder gears are both trying to move the filament at the same time, you are likely to chew the filament up.
do you have the filament tower like this (Excluding the LED)? 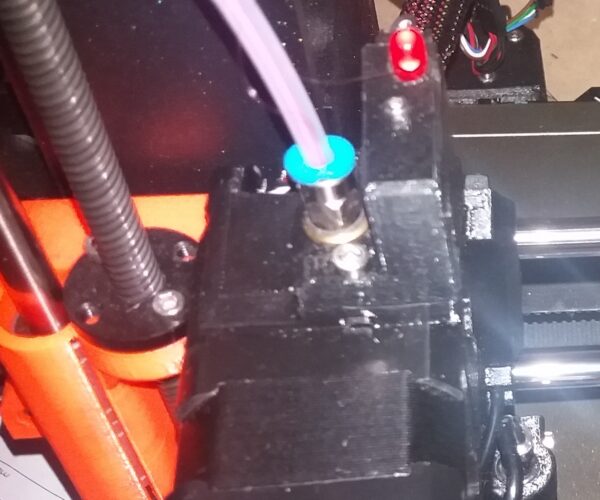 if your filament sensor is poorly adjusted you will have feed problems too...     on a normal Mk3S for MMU2S the filament sensor has to be monitored in the 'Support . Sensor' menu on the LCD panel... I found that cumbersome... so I fitted a 5Volt LED between the 5volt pin and the out pin on the sensor, and this gives you an immediate indication of filament status... LED ON when filament present.

some people have re printed the bondtech door with a slightly wider sensor arm, to ensure sensor activation.   my sensor is a bit finniky whe there is TPU filament in the printer, the arm doesn't move quite as far as it would normally move with a firmer PLA or PEtg filament..

Sorry, I should have added the s at the end.  Actually it is a mk2.5s with mmu2s.  All firmware has been updated to the correct versions.  Yes i do have that same tower on mine.    When I look thru the opening on the side with a flaslight it comes down to where it should enter the ptfe and I think that is where it is hanging because it is being push too far forward as shown in the picture.  I just dont know how to move the gear back.  My printer as working superbly before i upgraded to the MMU2s and now I havent been able to print ever since!!!  I want to get this dang thing working so that I can help print some items for the hosptals in my area!

Hi John,
Mk2.5 and mk3 use the same extruder assemble with the exception that the mk2.5 needs a nudger block for the X axis endstop switch.

how about giving yourself a break,

Disconnect the MMU2s Power connector,  that will disable the MMU2S
turn off the filament sensor on the printer. because it's in the wrong place for standard mk2.5 running... ,
bypass the MMU2s and feed the PETG directly into the top of the extruder
Manually load the filament.
and use the Mk2.5 slicer profile.... and just enjoy printing your PPE items in single filament.
then play with the MMU2 when there is less pressure, to perform...

Sorry to sound dumb here, but how do i disable the filament sensor?

There is an option in the LCD Menu, I think it is in the settings sub menu
regards Joan

Still having issues, I am going disassemble the extruder, it is just not lined up straight down, the gear sticks too far forward and is not letting it get fed into the PTFE

I disassembled and reassembled the extruder paying close attention the position of the bondtech and there was just enough play that after getting back together now feeds correctly.  New problem, get part thru prints and then get a thermal runaway error.  I looked thru the boards and after reducing fan speed to 60% it is happening less but still happening sometimes.  I have ordered the thermal socks but they wont be here until Monday!  Argh!  Never had a single problem until I did MMU2S  upgrade!  It is now disconnected and setting on the shelf.

I am having similar issues that is describes at the top. I have MK2.5S with MMU2S. When I try to load filament to noozle, it reaches bondtech wheels, extruder, but not go to noozle. I tried new setup of IR sensor, adjust tihten of bondtech wheels, but still loading ends with strange sounds as you can see at the video

Any clue what should I try?