trust me i tried plenty soap and water but it would not stick to the bed, tbh its a disgrace it doesnt stick straight out the box, my ender 3 stuck no problem and i never even once cleaned it, and that was £150 pinter so you would of thought a £900 printer would at least work ?

it nearly got sent back

Z-live adjust should be perfect.

A new bed can be a little more slippery, so the filament will hold not as good, after longer use it will get better.

Also it could be temperature where you are printing, let the bed/printer get hot before printing, in a enclosure get higher temperature inside, the roll of plastic could also be cold(depends on room temperature).

3d printing will never be, load stl, and printing and model is ready.

There will be always problems, is very normal, and yes you have to learn this.

I always rework a new printing plate with 1200 wet sandpaper, clean with soap and distilled water and then with isopropanol. For PLA, I would recommend the foil-coated printing plate, not the textured one. However, a good first layer calibration is the most important prerequisite for good adhesion.

Nozzle touches bed, PINDA touching a bit of zip tie and tighten? After that - never change the PINDA unless nozzle height changes. Then do it again.

That’s how I done it as the manual , nozzle on the bed and tie underneath but with that it always moved the paper under the nozzle in calibration and manual said if it done that to stop immediately and lower it slightly

I didn't really want to get into those detail on the video in case a non MK3 user watched it. I will add your recommendation within the description on the video and when I post on the prusa forum.

Thanks for the suggestion!

I spent most of the afternoon playing around with mine.  Firstly, the plate had another good cleaning (no visible marks afterwards).  Once it had dried out, I ran several rounds of the first level calibration routine, but I don't think it is there yet (I've already lowered the head by more than .2).

I have tried one of my prints, firstly before I tried recalibration, and again last thing.  The first attempt was knocked off the plate when the second layer went down.  The last attempt as more interesting.  The print had two components, the first started to move at layer 3, but the other component made it to about 8mm deep (.15 layers), but with warping on one corner.

Going back to the first layer calibration, below is a picture of the last run. 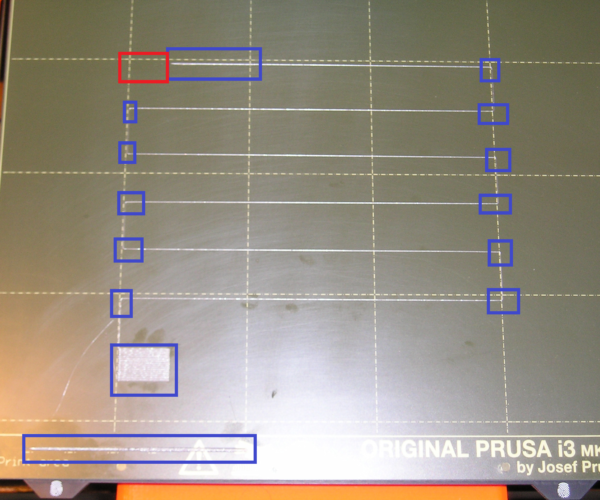 The Blue areas show where there is good adhesion, particularly with the bottom two boxes.  The red area is where there is no filament, but I think there should be, and the other areas don't appear to have any adhesion.  And I am aware of the marks in the bottom left corner, they are from where I've been peeling prints off the plate.

First tell the firmware which sheet you have mounted (smooth or textured) the last Z setting you set will be stored by the firmware for that sheet.

You need to repeat this process for each different sheet type you use. The physical thickness of the textured sheet is thinner than the smooth sheet.

Never ever mislead the firmware about which sheet is current. That can dig trenches across the sheet - or print in the air.

Thanks for this video! Would help a lot of people which have problems with first layer calibration.

I spent most of the afternoon playing around with mine.  Firstly, the plate had another good cleaning (no visible marks afterwards).  Once it had dried out, I ran several rounds of the first level calibration routine, but I don't think it is there yet (I've already lowered the head by more than .2).

I think I've cracked it 🙂

I ran my circular print again, but this time, I adjusted the Z whilst it was running.  I ended up at -0.650, and now I'm getting consistently good prints.

Thanks to all for your assistance, particulary @gkmakeit for the video explaining how to do it.

Getting that first layer right can be a little confusing because you have to go lower than just sticking to the plate, more like squashing it to the plate. Yeah my Z is around -0.750 on one of my machines.

I'm glad to hear you are getting better prints, happy printing!