Hello everyone.
I finally finished my build of my Prusa I3MK3S and am trying to complete my first print, the Prusa logo that came on the memory card. I'm running into some problems though and am hoping to get some help.
First off, I flashed the latest firmware and ran the setup Wizard. I got a result of perpendicular, which I read is the best result.
I was/am a little confused about the Z Axis manual leveling that you do next and am thinking that may be where at least some of my issues are coming from.

The first issue I noticed is that when starting a print, while everything is heating up, a small amount of filament thinly extrudes from the nozzle. Twice now that has caused the lines being printed to get twisted up in the filament and drags a glob of filament around until it falls off, but by then things are either too messy or raised so that the extruder hits it when it passes by again. That either messes things up more or the nozzle catches on it and pulls the entire print thus far from the steel pad entirely.

When that doesn't happen my lines still don't look right when  it makes a change in direction, either printing diagonally instead of in two right angles, or it lifts a bit to form what looks like a tiny loop at the angles.  This is what I'm thinking may be caused by my not understanding what to do in the z axis calibration step.

In the manual under z axis calibration it shows several pictures, one correct and several incorrect, showing what the printed filament should look like. But those images are at such a larger scale that comparing them to the tiny/thin lines being extruded is extremely difficult, at least for me.

Hopefully what I've written makes sense and someone who recognizes what is happening can give me some advice on how to fix it. It will be greatly appreciated. I'm so excited to get started printing and feel/hope that I'm pretty close to doing so if I can just iron out these issues.

Thank you so much in advance for any help! 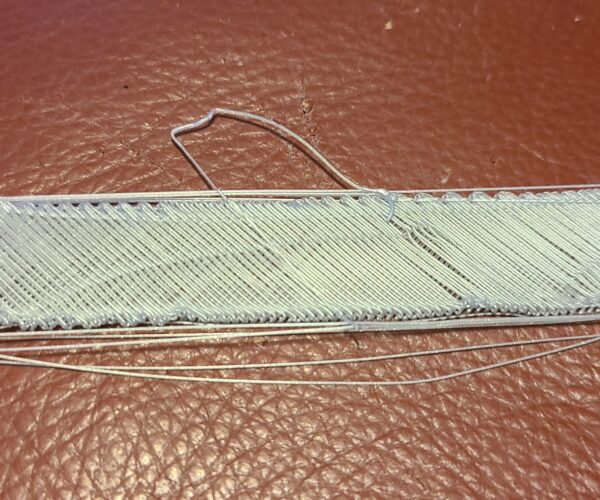 Even though the purge-line is supposed to clean any leaking filament, I use tweezers and clean the nozzle of any plastic right before the print starts. Just be careful.

As far as the Z-height and being able to see the lines - I have the same problem. My old eyes can't see that detail anymore.

The two best things to help with that are good lighting and a magnifying glass.

From the picture it certainly looks like your z-height is too high. Run the calibration and use a magnifying glass to look at the lines as they are being extruded and adjust the z-height until they start squishing. Once you get the hang of it - you'll know what works and what looks right for your printer.

Agreed. Your first layer Z is way out.  Somebody else is having the same problem here:

You need the same fix.

If I remember correctly I had adjusted the z axis down around 160 units (whatever the units are which are displayed on the lcd). I believe it said not to lower it more than 200 and if you can’t get it to look correctly by then that the PINDA height in relation to the nozzle needs adjusting.

Is that correct? If so and I’m needing to adjust it so close to 200 already without it looking right, do you think changing the PINDA height is something I should do?

During the build, getting the Pinda into the clamp’s hole was one of the harder parts due to it being so tight even before any tension was applied, so I’ve thus far not tried to adjust it as it’s very difficult to more up or down.

Lastly, if it needs to move, I’m guessing it would need to be lowered, ie lowering the Pinda correlates to lower the z axis, but I’m not sure and it could very well be reverse and need to be raised.
So, does moving the Pinda up/down X millimeters equal a corresponding value of movement in the z axis?

I hope that makes sense.  I am very much a layman when it comes to this stuff so far.

lowering the pinda means that your nozzle will be further away from the build plate!

instead of prusa first layer calibration

My live Z is 1.265.     the diagram below gives you an idea of the changes I see, for relatively small value changes....
Live Z values are unique to the 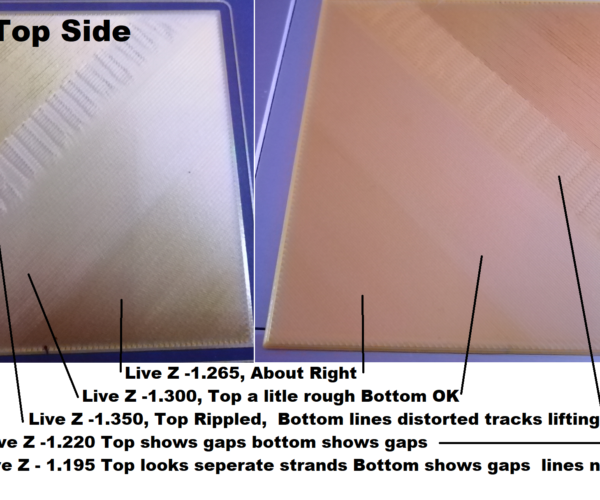 Thank you, Joan. I actually found and did that same test yesterday and watching it print while adjusting the z helped me understand the actual printing process and what the adjustments were doing so much better.

I think I’m about ready to finally print! I might run one more, starting at -1403.  I think that maybe doing it until I start to see it get worse instead of constantly getting better might be useful. Then I’ll have my final number and will print my first real thing (not even sure yet what I want it to be).

Thanks to you and everyone who’s helped me out!!!