I have frequent problems related to the MMU2S and Octoprint. I'm curious if I'm alone. Let me explain my process.

The printer will then warm up, perform mesh bed leveling, then move the extruder to the corner. It will back the filament out of the MMU and ask to swap filament. If I remove the filament the tip is still freshly cut. Loading the filament will load to the nozzle. I confirm it is loaded. It will then perform the mesh leveling again.

At this point it's about 50/50 whether the print will actually begin, but that is due to the MMU throwing a low power fault that is only cleared by powering everything off and starting over.

If I print the same file from the SD card the printer behaves as expected. Am I alone in this? If I can get the printer to work after the first Octoprint print I usually don't have any issues aside from the aforementioned low-power hardware failure that seems completely random when the MMU has to do anything.

I  use Octoprint on an RP4 via a USB connection. I haven't had issues like you're experiencing. When I do a print, I never load to the nozzle first. I just use the "load filament" option that puts it up to the MMU but doesn't load it to the extruder. When I start the print, I select on the display which filament to use (but now I have a plugin so I can do it from OctoPrint).

I read a long time ago that the MMU has an error in the design that can cause the 5v rail to sag. The same person that made the claim said that they plugged in a USB cable to the MMU's USB port and supplied 5v through it and their issues went away.

I tried the power supply trick, and it doesn't work. I'm looking to sell my MK3 + MMU when the XL releases, so I'm not about to buy another MMU board, which seems to be the fix (hardware revision).

As far as the weird behavior, I found that it seems to just be an issue with the MMU. I ran a handful of prints from the SD card and I had this exact behavior once. I'm not sure if it is chance or there is a reason it happens more often with Octoprint. Either way, the fix for now is to just remove the MMU until I actually need it.

A note of caution. Generally electronics do not like having two sources of power doing battle on the bus. If external power is required and only way too provide it is thro a USB port than break the link between devices, add an external PSU to power the 5v rail and remove existing connection to internal power. Anyway it's unlikely that USB2 port (100mA max) will provide enough power, atleast USB3 is good for 1A. Also avoid hubs powered or otherwise.

I'm messing with my printer today and forced a filament runout to occur by cutting the filament before it enters the MMU. The sensor in the MMU (FINDA) detected that the filament ran out, so then the MMU backed out the filament and asked me to change it. It also moved to the front right corner to do the little purge when the new filament was loaded. This kind of sounds like what you are describing is happening to you.

I wonder if you need to move your FINDA down about a millimeter. When you go to start the print, you can go to the Support --> Sensors menu and watch the FINDA readout. You'll see it indicate "N/A" sometimes, like when trying to load or unload the extruder, because it'll ignore that sensor for a while. You can argue all day long about whether or not it should or shouldn't, but it doesn't change the fact that it does. So, just don't worry when it says "N/A".

That sounds like what may be happening. Once I get a new bed thermistor (current one has a break in the wire) I'll check the filament sensors again. It's completely possible that one or both sensors have shifted over time and are no longer correct.

Well, this is just a mess. I'm currently trying to downgrade the entire printer to just an MK3S from the MMU2. I can confirm that the filament sensor is reading correctly as I move filament through the extruder gears, but the printer still moves to the edge of the bed to unload and reload the filament randomly. Once I remove the MMU2S sensor stack and go to a normal IR sensor I'm hoping it'll be more reliable.

For what it's worth, I was referring to the FINDA, the filament sensor on the MMU. I'm wondering if it is just barely low enough to sense the filament, but maybe gets pulled out of range when the extruder starts pulling the filament.

Prusa support is supposedly very good, you paid good money for this printer. You should take advantage of the support since it is available.

I also ran into an issue recently where the extruder filament sensor would fail seemingly randomly. It was due to the axle within the gear starting to fall out of the plastic. I can take a picture when I get home to better explain.

For what it's worth, I was referring to the FINDA, the filament sensor on the MMU. I'm wondering if it is just barely low enough to sense the filament, but maybe gets pulled out of range when the extruder starts pulling the filament.

Prusa support is supposedly very good, you paid good money for this printer. You should take advantage of the support since it is available.

I also ran into an issue recently where the extruder filament sensor would fail seemingly randomly. It was due to the axle within the gear starting to fall out of the plastic. I can take a picture when I get home to better explain.

I tried contacting support for something else this morning and found that the chat window doesn't work. It wants me to enter an order number, but all 6 order numbers in my profile are somehow invalid. Maybe they'll figure it out in a few days.

So I disconnected the MMU2 and was running with the printer in single mode, but still using the chimney for the filament sensor on the extruder body. I was getting random runouts, despite the sensor reading correctly while I was pushing filament all the way to the nozzle and back out. I'll pull the door off and see if the axle rod is coming out like you said. In the mean time I've disabled the sensor via the settings and have run 7 hours of prints without an issue. At least now I know it's for sure the filament sensor.

Based on your comment, I think you understood what I was talking about when I mentioned the axle coming out. Regardless, I wanted to be sure that what I said made sense. I've attached a picture to indicate where the axle is that came out. One end stayed in though, which allowed the gear to remain in place, but not put significant force on the door. If I adjusted the tension and the tower, I could get the filament to be detected in the loading process. However, part of loading the filament involves running it slightly backwards, and at that time the sensor would fail to see the filament despite being loaded. 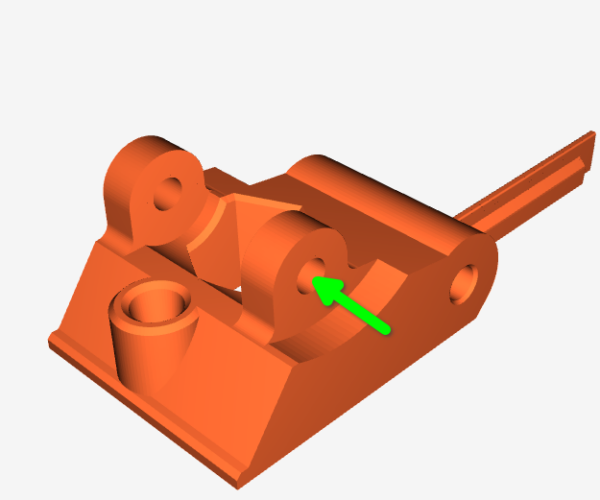 Before I figured out that was what was causing the issue, I printed a new one. My thought was that it was worn out or something, like maybe it was wearing at the pivot point? I dunno, I was grasping for straws. That idler didn't work because I printed it with an IR transparent filament without realizing it was IR transparent. Luckily, the original was still fine and I just switched back to it.

This part works quite well. I replaced it about a week ago. I never had much trouble with getting the sensor positioned, but this did make it very simple. I moved the chimney as far to the right as I could, and left the vertical screws just a little loose. I looked in the sensor menu and verified that the filament sensor indicated a '1' then started tightening the horizontal screw until the filament sensor showed a zero. Put another quarter turn on the screw then tightened it down so it wouldn't move.

Recently I spent so many hours trying to troubleshoot a very similar issue. Long story short, I’m my case I had to replace the board. I had a bevy of weird issues that started piling up, one of them was the mmu getting stuck in this cycle of bed leveling, loading, moving to the right, unloading…over and over and over. Infuriating. I was also attempting to use an octoprint plug in called PRUSA MMU select or something. For some reason that aggravated the issue. I turned that off and the problem went away for a while, but then other things kept occurring. Odd things. The LCD would report an error on startup, something about kernel error and only English supported. Finally it refused to take a flash or reset to factory. I’ve since replaced the board (and bought a spare), and the issues are gone, even the octoprint plugin. The MMU and I are back to our normal mutual love hate relationship lol. Not saying this is your issue, but these loading issue was very similar. Hope this helps you or someone else who might see this in the future.

I’ll also add, this is probably the single greatest modification I’ve made to my Prusa. I’m on a one man mission to spread its genius (it’s not my design): https://www.printables.com/model/124431-idler-body-for-mmu2s-with-some-extra-features

That and The Zero Beast mods/project have really helped me tame my mmu.