I'm having an issue where the print starts fine, but when it comes time for a filament swap, the filament being swapped out actually falls out of the unit, rather than just being unloaded. I thought this had to be an idler tension issue, but my screws are a couple turns below "flush" with the part, which is tighter than the guide recommends. Could it be something else?

It is not the idler that holds the filament in the MMU.

That is done by the PTFE tubes at the back of the MMU. The PTFE tubes make a little bent when they are clamped by the mmu2-rear-PTFE-holder. This gives enough friction to keep the filament from falling out.

If you use a larger ID tube there or some kind of rewind spoolholder it can get pulled out to far.

Oof, support told me it WAS the idler that held the filament in! That's great to know. I have 3mm ID tubes on the back.. and gravity auto-rewinders.. so I suppose I ought to swap back to the stock PTFE tubes and see how it goes. Thanks a bunch.

I think you can use the 3mm PTFE tubes, but you have to make a bent somewhere. If the filament doesn't have any resistance in the tubes that gravity spool holders are known to pull out the filament some times.

Strange that support told you that the idler is holding the filament.

You can check that easily. With all filaments loaded you can probably pull out four of them. My experience is that the filament to the left of the one that is selected is held by the idler, that others are only held by the resistance in the tubes. This is just because of the way the idler is designed and rotated during use.

Thanks again. Out of curiosity, what's your filament management solution? Are using the stock buffer and tubes?

I have tried different buffers and spoolholders. The rewind spoolholders make it easy on my setup, but I fine them not reliable enough.

And I have no space behind my printer and want to have the spools above it. That is why I'm now using this buffer with some modifications.

All with 2 mm ID PTFE tubes. I have bought some 3 mm, but never installed it.

With no space behind the printer it is a little difficult to get the tubes like I want it. But it has worked without problems so far.

What I like about a buffer is that it doesn't have moving parts and there really isn't anything that can go wrong. With the rewind spoolholders I have seen a few times that the filament retracted faster than the spool could rewind and the filament would end up next to the spool and get stuck. That only happened on some spools and only when they where almost full.

This is an older picture of my setup. I have made some changes, but most of it is still like this. 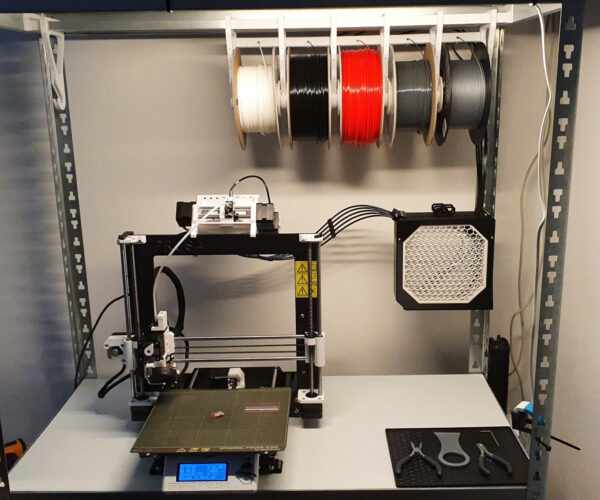 I may have to try a buffer. I swapped the stock PTFE tubes back on a couple of my filaments and I'm still running into the same issues. When it swaps, it ejects the filament altogether probably 25% of the time. Then I have to intervene and manually reload it.

In this picture I have the stock tubes on the white and purple filament. It didn't help the issue, but I'm wondering if there's something I'm missing regarding the "bend" in the tube? The white is easiest to see--just wonder if anything is glaring. FWIW, I've installed the M10 PTFE holder passthrough adapter on the back (seemed to be highly recommended), but I haven't seen anything that would lead me to believe this could be causing the issue. 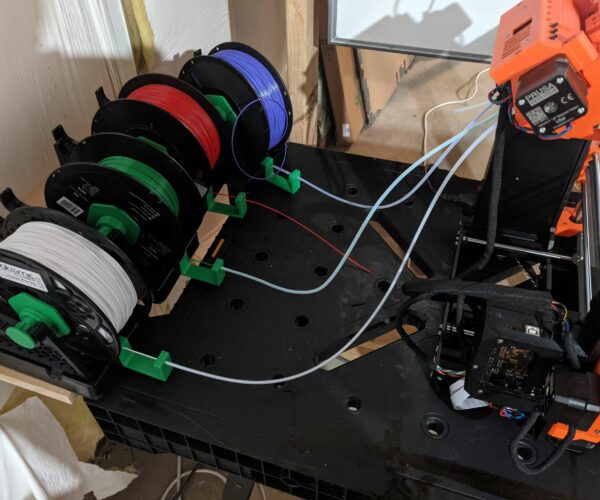 This sounds like the gravity spoolholders are pulling to hard on the filament.

The bent that I mentioned in the original Prusa design is in the mmu2-rear-PTFE-holder. You can see it in this picture of that part. There is a little kink in the channel for the PTFE tube that adds some resistance to the filament. That is normally enough to stop the filament falling out.

But a rewind spoolholder can be pulling to hard if the rest of the PTFE tubes have very little resistance. 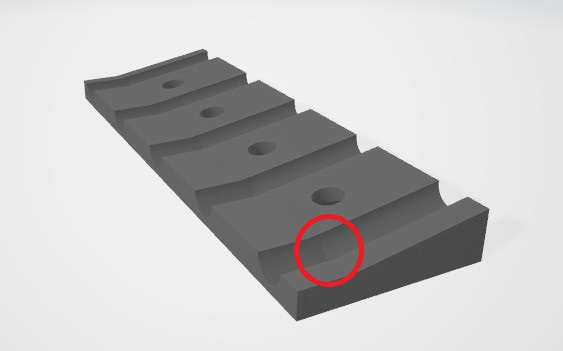 I would think it is a combination of things that give you problems. The modified PTFE holder with m10 fittings, the almost straight PTFE tubes between the MMU and the spoolholders, the 3 mm ID tubes and maybe the almost full filament spools. A heavy full spool pulls harder on the filament.

Adding a bent in the tubes between the MMU and the spoolholders could add just enough resistance for the filament staying in place.

You could try putting some thing under the front of the spoolholders. By lifting up the front you make the track that the spool runs  up and down on less steep. That should reduce the forces.

I tried those gravity rewind spool holders but had a similar problem.  I also hated the clunking sound.

I think Baklin is correct, the M10 PTFE replacement for that part is 100% required upgrade.  The other thing that works really really well for me is horizontal mounting of the MMU.

Here's the arrangement that works for me now.  Shorter PTFE tubes coming out the back and feeding the filament from sunlu dryer boxes.  No buffer in the middle other than enough room for slack to safely absorb retracted filament.

I just completed two prints mmu prints of a light saber that were 1700 filament changes with 1 intervention on the first and zero on the second, not to mention several prints before that that were in the hundreds of filament changes. 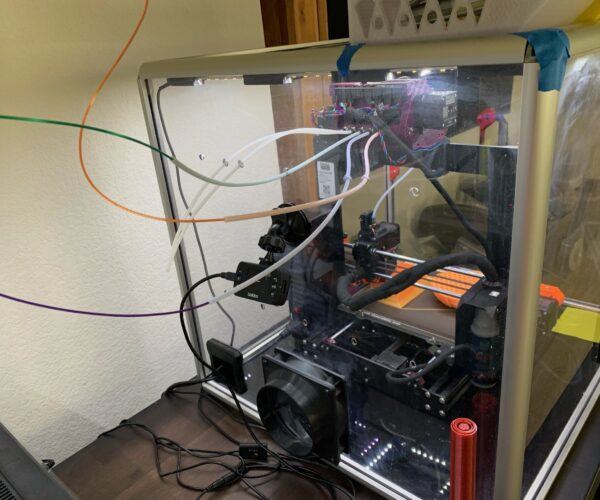 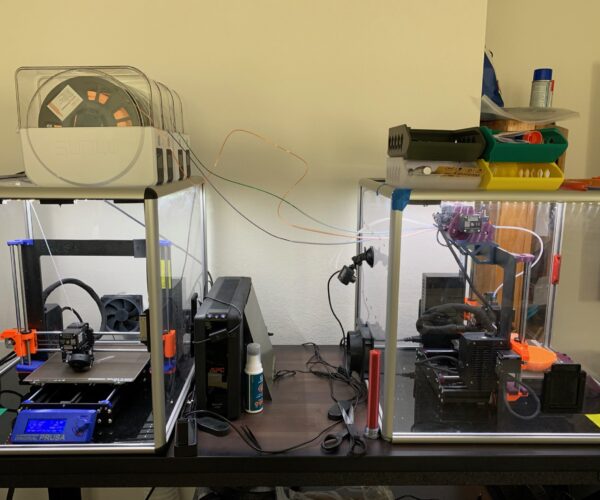 @baklin Your "The bent that I mentioned in the original Prusa design is in the mmu2-rear-PTFE-holder. You can see it in this picture of that part. There is a little kink in the channel for the PTFE tube that adds some resistance to the filament."

This is #2 best advice about the MMU2 for me! I was so tired of filament slipping out, I couldn't even do two layers without filament loading issues, but I have now done two complete prints without any issues. I was ready to "rage quit" the MMU2 again. When I saw the fact to tighten the PTFE tubing holder tubes, I cranked those suckers down so tight you'd think I was making diamonds! LOL > But I am thankful I continued to have patience.

#1 bit of advice that was more helpful was the extra loading distance setting that had to be set to 0 instead of 25 in the printer settings. This #1  took me an entire month to fix.

The number one issue that I had learning about printing with the MK3S in general was the fact that I had leakage from the heater shaft and the heat brake because I didn't install it right. After $100 and 2 hours of dismantling and reassembling the extruder, I finally had a working printer that wouldn't ooze filament everywhere on the print (so sloppy).

I think Prusa gets a lot of credit from the community for the MK3S, but a lot of criticism for the MMU1 and MMU2S. What I am seeing is usually it is my own lack of knowledge about the MMU2S and my own sloppy assembly that has caused a lot of the issues that I have had with my printer. It all takes time and effort.

That was good, but now that I posted this, My printer just failed and the MMU2 Lights are flashing. The Sheep board (the MMU2 board) seems to be malfunctioning. It doesn't properly sense the placement of the selector, and keeps going to the first light even if it is on the second or third filament selection.

Do you think the board could be bad? Could it be a power supply issue from the Einsy Main PCB to the MMU2 board?

I found out what my main problem was for the filament coming out.

After I factory reset and re-flashed the MMU2S board, I still had issues and was considering buying a new board. Then I inspected the board for damaged transistors and found none (because sometimes the filament would not go into the selector and would curl up into the board area).

I think the shaft was bending because the bearing on the opposite side of the pully motor was not seated in the correct place. It had moved on the shaft and was out of its 3D printed position that it was installed in on the MMU2S body. It had moved so far as to touch the first gear tooth piece for the filament 1.

Note that here I also had Five flashing red LED's. The Selector would also not respond to the right left button inputs. The MMU2S would just being to flash red LEDs each time I pressed the reset button. 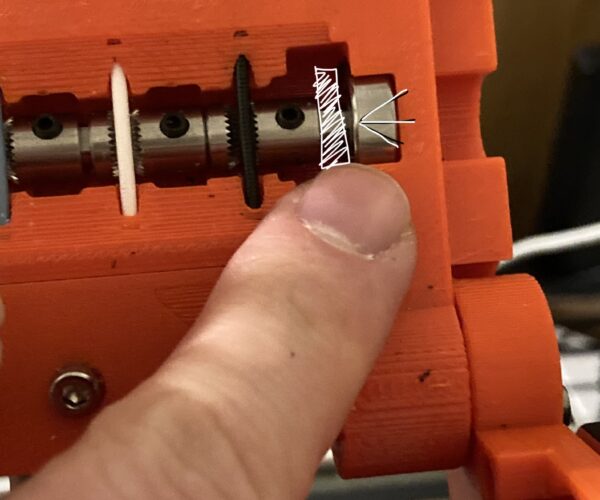 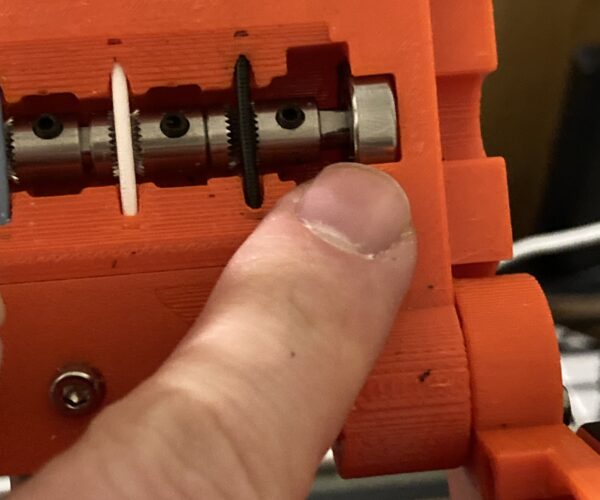 I fixed the MMU2S by pushing the bearing back to the proper position.

After doing this, I also checked the FINDA ball for filament fragments to make sure that it would not be the problem either.

After doing all this, I powered the printer back on, I got five flashing RED LED's at first, then I got Five Flashing GREEN LED's and then the printer selector began to respond again.

I know this an old thread but wanted to add to it. I have same issue with the filament falling out. Found this ptfe tube holder. I'm still printing it but I think it will solve the problem.

this is an interesting concept.

In many instances people use larger bore PTFE to reduce friction between the reel and the MMU...

but these ptfe tubes are very short...

I have never had the filament falling out issue myself, but this looks like a novel option, if you do have the problem

it looks like this user is not using a buffer so maybe this is the difference.

I ended up using this remix which lets the tube go all the way through. It did solve my issue with the filament falling out. I also am using short tubes with no buffer. Also my spools are below the table my printer sits on so basically the filament was going straight down. And I use the m10 fittings. I think all these things contributed to the issue. I was a bit incredulous that after fighting friction for months on various buffer systems, this happened. However its an easier problem to solve.