I have recently been experiencing a peculiar print issue on my Prusa when trying to print with DO3D Silk Copper PLA filament. First I would like to share a little bit about my background so you have an idea about my 3D printing experience. I bought the Original Prusa MK3S printer in early spring of 2019 as a kit and assembled it shortly thereafter. Initially I was doing very simple prints with just the PLA provided with the printer. After a about 4 or 5 months of this, I moved on to try printing with other Prusa PLA filaments. After about 8 months, I began printing with PETG (just the Prusament initially) and continued printing more complex parts. Since then I have branched out to try PETG filaments from other manufacturers, TPU, and even tried some PLA infused filament (wood initially). These were all successful.

Recently my girlfriend bought me some DO3D Silk Copper PLA filament to use for printing some gifts for friends. The firmware on my Prusa is up to date with 3.9.2. I setup the print job in Cura using the Original Prusa MK3S printer profiles and set the material to PLA. Specifically the print temp was set to 220C, the bed was set to 60C and used the standard settings for everything else (for PLA that is) in Cura. When I tried printing the part, the first layer went down nicely, but after the 3rd or 4th layer I received a warning on the LCD screen notifying me of a Thermal Runaway. I'm not sure why this happened as I have never seen this issue in the past. I remember making sure to follow proper procedure when changing filament. Later I tried rerunning the print with the same temperatures, but using the Prusa PLA as the base settings for retraction distance, retraction speed, fan speed etc. Unfortunately I had the same results the second time. I'm not sure what is suddenly causing the thermal runaway issue as I have never seen it before and I have not made any recent changes to the hardware. I tried cleaning the hotend, but it didn't make a difference.

Has anyone else printed with type of filament before on their Prusa? What were your results? Did you experience the issue I am seeing, and if so, did you find a workaround? Any insight about the thermal runaway issue would be helpful. I have a basic understanding of what triggers it, but I am not sure what about this particular print job would cause it to occur. Any help would be greatly appreciated. Maybe the copper based filament has greater thermal conductivity which is causing the hotend to lose heat faster than normal and it is making the heater work extra hard despite the thermistor not seeing expected temperature change.

I don't have a lot of experience with the silk filaments, though I've got a couple of spools in my stack. I have read that they are thicker than normal filaments.

It's also noteworthy that the first layer went down well but it threw the error at higher layers.

Thanks for getting back to me. Since adding this post I had the chance to look into the issue a bit further. It sounds like the thermal runaway is just a safety feature enabled through the firmware that prevents the heating element from continuing to ramp up unchecked if the thermistor isn't measuring the expected temperature changes within a certain time frame. It in essence, assumes there is an issue with the thermistor (or the heating element) and pauses the print to prevent hardware damage. Initially I was under the assumption that these infused filaments only had very small amounts of the infuse material and not enough cause any significant change in the overall material properties of the filament (at least not enough that it would require considerable adjustments in order for it to print).

This assumption was clearly wrong. We know that copper has great thermal conductivity and is often added to printed circuit boards solely for the purpose of dissipating heat. As such, I had hypothesized that a lot of heat was being lost from the hot end through the filament itself causing the hot end to cool significantly more than it normally would during the printing process. Since I did not expect this affect to be so significant, I did not account for this when setting up the print job and had the fan enabled for full speed. The fan operating a full speed during parts of the print actually becomes overkill since the hot end is already being cooled by the filament itself. Hence why the heating element would try to work twice as hard to reach the set temperature and the thermistor not seeing the target value within the expected time range.

To test the hypothesis, I setup the print job again and this time set the max fan speed to only 40%. The print worked perfectly after that. In a nutshell, the hotend loses a lot of extra heat because the filament has significantly more thermal conductivity than normal PLA and hotend fan at normal speed cools the metal too much making the heating element work harder to reach the temperature the thermistor is expecting to see..........hence causing the system to engage the thermal runaway error mode and pause the print. The moral of the story is to turn your fan speed very low or turn it off completely if you plan on printing with copper infused filament.

Unfortunately I did not see your reply until after I had made this discovery for myself. Thank you for your support! I'll make sure to pay it forward or return the favor should the opportunity present itself.

I think you are a bit confused.

The copper portion of the filament is color, not material.  The filament is not infused with copper.  It is pigmented/dyed to have a copper appearance.  That's all.

Regardless of what was added to the filament, it's pretty clear that the thermal conductivity is significantly different from that of standard PLA. I've printed many parts in PLA and never once encountered a thermal runaway issue or had to basically turn off the hotend cooling fan to get through a print.

Here is an Amazon Link to the product.
https://www.amazon.co.uk/Formfutura-1-75mm-MetalFil-Classic-Filament/dp/B01IBMXNUC/ref=sr_1_6?dchild=1&keywords=copper+filled+pla+filament&qid=1607955371&sr=8-6

here is a link tot he manufacturers page
https://www.formfutura.com/shop/product/metalfil-classic-copper-2821?category=459

I have used the copper fill filament to make a topical toilet roll holder, in the past...

here is a picture of the second version, as I didn't take pictures of the first one 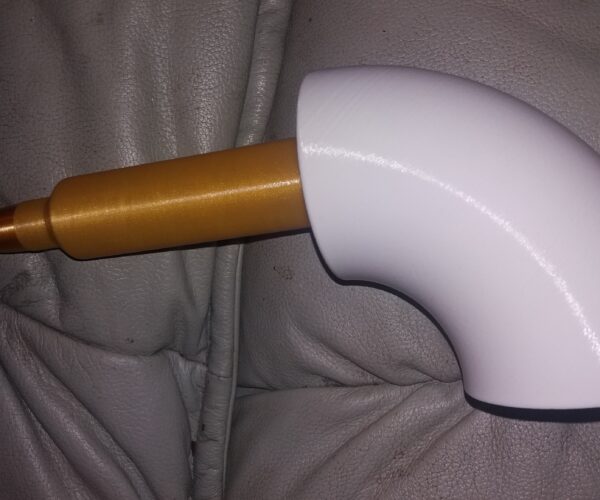 this is topically called the "BOG BULLET" and is a toilet roll holder, modelled on a scaled up 5.56mm Nato ( .223 ) bullet  there are currently three in existance, One at My rifle club, one at my Registered Firearms dealers and one at a friends house...
Only one has the copper filled bullet section... the others are copper coloured