Switched to Cura - because of supports

Switched to Cura - because of supports

My first post (though I have responded to a few). I am relatively new to owning and using an FDM printer - Prusa MK3S. I am really really enjoying it. But I have recently bumped into a hiccup, which i thought I would share and perhaps get some advice, but my solution may also be of interest.

I have a small job to complete, It is to build a number of rings (approx 125mm dia x 8mm cross section). I have stacked these in the slicer (23 pcs) and used supports to bridge the gaps. I left roughly a 1mm gap between each ring. 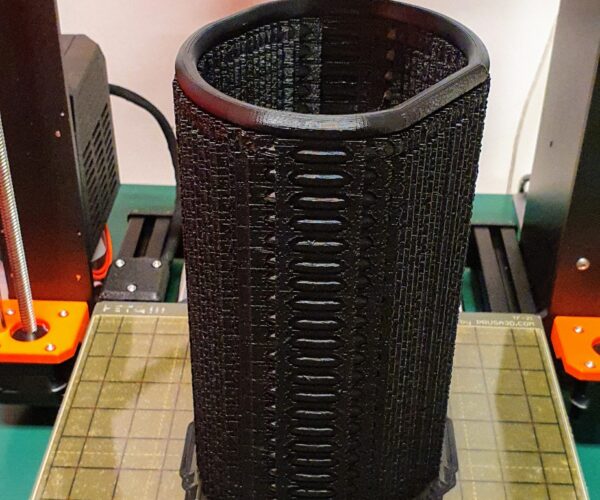 The next build, using the same brand new roll of filament, identical file on the SD card, was a mess. I ended up with a nozzle jam (I now understand why this happened - separate issue). It was a hairy mess, that I have blamed on the supports, mostly.

I am though unclear what has caused the missing undersides of the rings on one side - see image. Obviously these are rejects. But maybe it is connected to the supports? 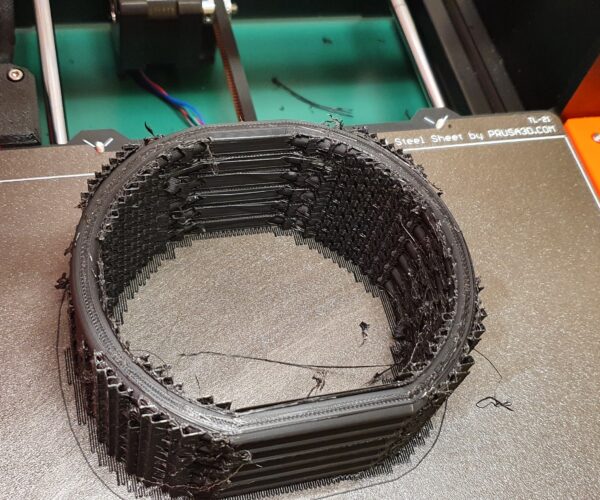 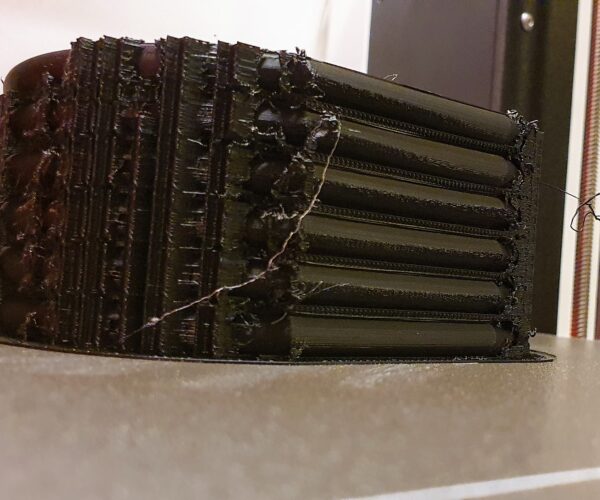 After a full clean and reassembly of the print head, I decided to see if Cura handled the supports in a better way. Sure enough, it did. At least in the software it appeared to be so. Right now I have a build on the go done with Cura G-code. So far so good. I'll see in about 13hrs!

I see that on the MK3S LCD display, the total print time shows, but it doesn't change as the print progresses - I guess a detail of the G-code? I also see it automatically displays (in this case) 56% 'done' of the file.

I hope some of this is useful. Because I am new to a lot of this, I am on a steep, but fast learning curve. Prusa Splicer doesn't seem to give the same level of control of supports as Cura. Maybe this is known and being worked on?! But if you're wrestling with supports, take a look at Cura.

I guess it's inevitable where two packages are being actively developed, one will be superior in a particular aspect in the short term. Perhaps you could raise your issue on github (the devs don't seem to follow this forum) and maybe they'll sort it and you can return from the dark side. Cura tree supports are great, not from any utility but they just look cool.

Although PS is now my main go-to slicer for the I3, Cura does indeed have a few very strong spots, and one of them is supports.

Another is that it is far more forgiving when it comes to .stl files which are not totally correct.

However, the 'ironing' function in the new PS definitely works better than that in the recent Cura.

The first Cura build failed. Well, my first attempt did. I have put this down to a number of parameters that I probably should have adjusted - some speed parameters/retraction amount/speed/build temperatures and some others... But what I did notice during the build was a 'different' behaviour of the print head. I found this interesting. I am guessing it's the nuance the g-code. One immediately obvious difference was the travel patterns of the head - in Cura, for this particular build at least, it seemed to run right across the diameter of the rings to begin a new part of the build (this left a number of long, interconnecting strings!).

So. Since I have to deliver these rings soon. I have reverted back to PS. I do like PS actually and I wish they would look a little into the supports story. I thought my build was pretty straighforward. Famous last words 🙂 So in PS I have spent quite some time pouring over the parameters to aid successful completion of the scaffold. I have done the following:

Slowed the speed for scaffolds to 25mm

Reduced the nozzle temp to 205 degrees (I am using a hardened steel nozzle - I am aware of some need to compensate for this type).

Ticked "Endure vertical thickness" - I did this partly to ensure the ring is well supported, but also as I see it working well as wiper during building.

Again. Hope this is of use to someone. I also welcome any advice. Being very new to this, I am happy to learn what I can!

Half the time I post, I probably come across as a fanboy. The other half, a troll. I'm a huge fan of Prusa, their printers, and PrusaSlicer. It's definitely my go-to slicer for most situations. Unfortunately, supports are one feature that still carries a lot of baggage from its old Slic3r origins. My current flow for choosing a slicer is:

Apologies for those who've seen this before, but here's a quick comparison I did between slicers showing removable support underside results. Starting at the top-left to right, ideaMaker, Simplify 3D, PrusaSlicer (2.2), and Cura. The numbers show the resulting thickness of the 2mm supported surface. 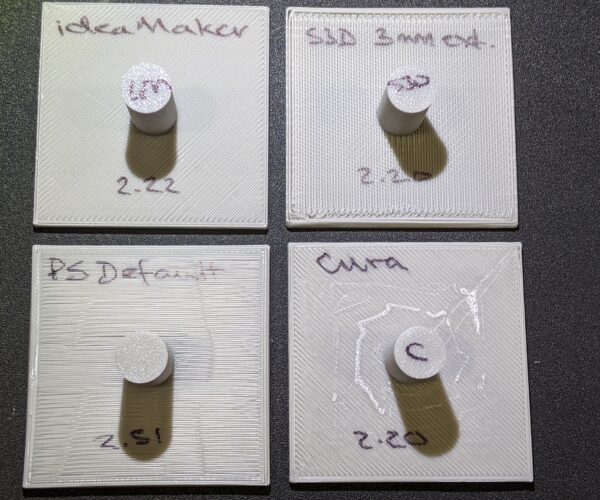 It's a good time to be into 3D printing. We've got 3 free slicers under active development. While each team of developers is doing things differently, they are innovating independently while still sharing ideas. Cura and PrusaSlicer are also open source which only encourages development.

Bobstro - Thank you for the info! Looking at your image, it seems I should at least take a look at the IdeaMaker slicer. I think you're right by the way, it is a good time to be here in the 3D printing world. I feel slightly fortunate to be dealing with it hands-on now after years of using bureaus (obviously the SLS, MJF and SLA methods are different animals and i will continue to use them!) but I am aware I am entering at a moderately advanced stage (compared to say, 7-8yrs ago).

Despite my earlier message, I have spent time since very carefully trying to tweak the config within Cura. The simple reason is time. Cura's reduced support method literally halves the time (with the corresponding big material usage reduction!).

To save me trying to explain, I thought a couple of screen shots would help. The first is of the Cura solution to supports, the other is PrusaSlicer. Note on both the build time and material usage. The issue with the PS supports is that they are essentially too fragile. In quick time they conspire to wreck the build. But I still haven't answered how I was able to build a 23 high stack of them without a hiccup... 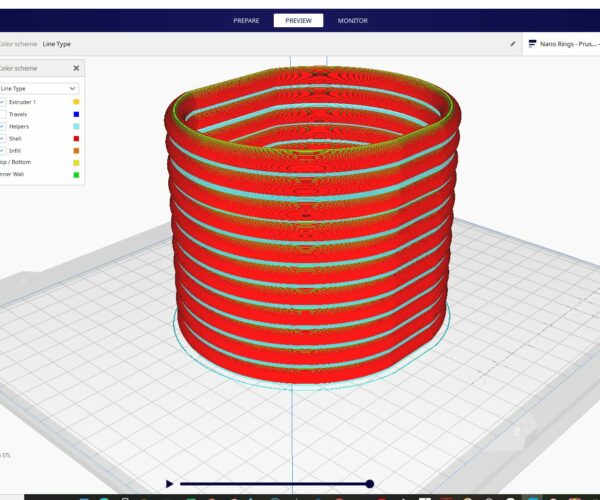 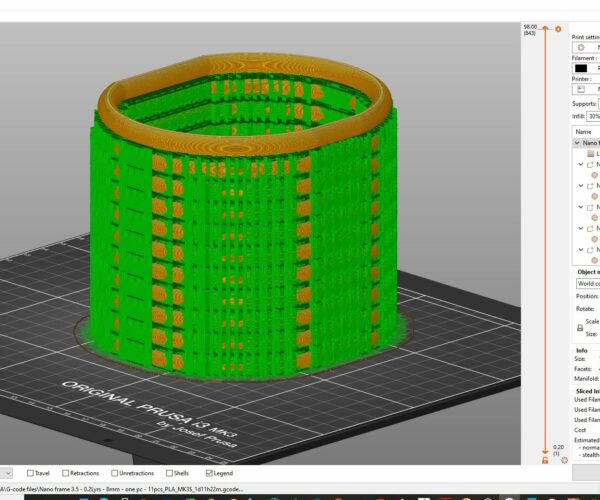 You can add tree supports using meshmixer (which is free) if you want to stick with prusa slicer.