So, I'm new to the printing world.  I can download others objects and print them no problem.

I made my own model in sketchup drawing some of my own pieces and borrowing others.  It looks nice.  I exported it as an STL and imported it as a object into PrusaSlicer.  It looks fine there.  When I slice it, I get an error that says "Empty layers detected, the output would not be printable."  When I look at the slice view - whole sections of my design are gone.

Is there a reason why that happens?  Do you need pictures or the file to reference?  I can upload any of it.

Thanks in advance!!!  If this is a duplicate thread - I apologize - I didn't see one that matched (but stopped at page 5:) ).

This is VERY common when trying to print models that are downloaded from the 'usual suspect' 3d printing sites.  The .stl files are often times corrupt and will not slice properly.

Here are a few hints.

Attach the suspect .stl file to this thread.  You will have to enclose it in a .zip file for the forum to allow you to post it.  I and others are usually willing to take a look at these and sometimes fix them.

Try another slicer.  PrusaSlicer is not as forgiving as some others when it comes to wonky .stl files.  Cura is the one I use when something will not slice in PrusaSlicer.

Try fixing it.  Try the PrusaSlicer 'repair' menu option, which has supposedly descended from Netfabb.  (Personally I've found bad .stl files which PS will not fix but the stand-alone Netfabb will.)  FreeCAD has a whole menu of mesh fixes which may or may not work.  I've found that importing into FreeCAD, converting to shape, refining shape, and converting to solid and re-exporting will fix many (but not all) wonky .stl files.  Meshlab has an overwhelming menu of fix-it options but has an incredibly steep learning curve, very poor documentation, and no 'undo' function.

Sometimes, even positioning the model in a different orientation in PS will work.  😉

Kewl - thank you much.

This isn't a case of the model I started with being bad.  I had a model of a train that worked and I could slice fine.  I imported the STL file into sketchup, made a bunch of changes, exported a new STL and dumped it into PrusaSlicer.

The raw image in there looks fine - but when I go to slice it, not so much.

I'm sure its just a noob problem, but looking through the forums and trying to see what it might be, isn't leading me anywhere.  I know in my sketchup file some of the panes are 'backwards' like they are blue or white?  I didn't think that mattered....

Thank you so much for offering to help!!!J611v3b.stl 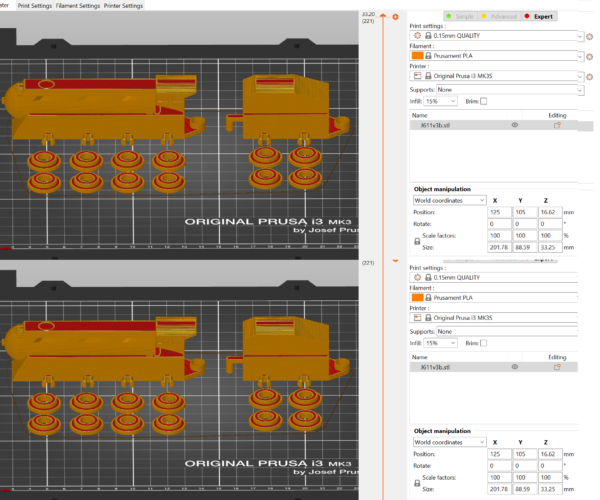 the top image is the file loaded from your zip file and sliced, on the right hand side I have circled an orange warning triangle, showing errors exist in the STL

I clicked on the icon, and Prusa Slicer used Netfabb to resolve the issues,
the lower image is the repaired file sliced with the same settings...

I hope this helps you resolve your issues.

Once repaired, you could export the Plae, as an STL, and save the repaired STL for future use.

Oh, thats awesome, that fixed it for me!

I think one problem I had is that the button doesn't work on the mac version of prusaslicer.  If the triangle explanation point is there, but you can't click on it.  I used it on Windows, and it fixed it fine!

Either way - I have one mystery to solve on it, and I think I'm golden!  Thanks again!!!