Weird Horizontal shift in print only in some prints.

Weird Horizontal shift in print only in some prints.

I'm getting a shift in the model only on some prints. Still new to 3D printing, so was only using 0.05mm Ultra Detail. Then switched over to 0.20mm Quality settings when realized it could print just as good and much faster. None of this shows up in PrusaSlicer and has occurred only on the these two objects (pictured) where it happens at different heights. Also have printed many other items. One of my designs have printed 3 times which has a outerbox, inner box and lid, so 9 of them. In-between these two objects showing and nothing like this happened. So pretty sure it has to do with design or setting, but not dismissing other ideas. These objects that printed great were 126-130mm in height (pictures show the height where shift occurred on them). So that is why doubting hardware issue.

This first item printed at 0.05 and 0.2. Thinking it was design and because the object was sloping in I adjusted the thickness to a multiple of 0.4 (as close as could get), since it wasn't, and that didn't help. Same problem. Maybe my adjustment still wasn't good enough. But the shift is around the whole object about 10-12mm up. Have printed multiple of these and occurs at some height, different color PLA+ and two different layer heights. 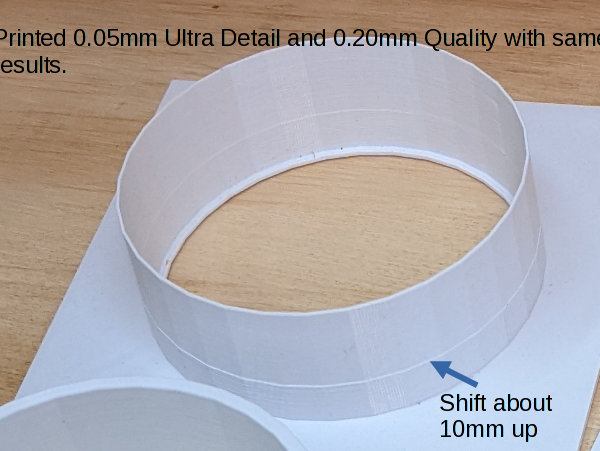 This next print: Which may not be cause by the same issue. Which was just today, after printing the other models where they were 126-130mm in height over the last few weeks. I have printed about 5 of this model at 0.05mm ultra-detail and looked great. No Shift!. Now I imported the .3mf file and switched it to 0.2mm Quality and imported the settings (maybe that was my problem) from the earlier print at 0.05mm. ALSO, with this one there is NO Slope, so I can't blame the problem on that like I did in previous model. This one is completely vertical. 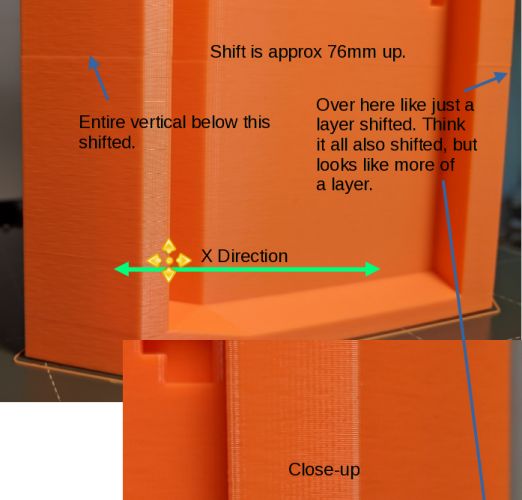 It doesn't really affect the print and still looks good and on this last one isn't always noticeable unless the light hits it right for the most part. It is perplexing me how to fix it. Like said, have printed other stuff and this didn't occur. The white duct plate above was around 10mm up and this orange one was around 76mm up. Both in-between the other models have printed. Have printed the white duct plate in different Inland PLA+ colors and still occured. But not with the other models that are taller that go with it, they were fine.

If was going to sand and paint these would care less, but like most of you trying to get the best prints. These are the only models have seen this on and don't think it is hardware. So unless see it on more don't want to waste time adjusting something that isn't broke and make it possible worse. Hoping it is design or setting.

It's hard to tell from the photos, but that doesn't look like a shift to me, it looks more like some kind of layer artifact, possibly even a slicer artifact.

If it is a shift, most shifts are due to some form of mechanical obstruction that limits the path of travel for that Axis.  If the cable to the bed somehow gets obstructed so that it causes the servo to skip you can get a layer shift.  Another issue I've seen, not with my Prusa, but with my Ender 3, is a bad cable to the X axis would sometimes lose contact with the control board and wouldn't move the X axis far enough and cause a layer shift.

In most of your prints it isn't obvious the plane of the print changes above the affected layer.  The cylinder seems to be more prominent on the exterior of the cylinder than the interior, a shift should register equally on the inside of the print as the outside.

To get further help with this you need to identify if this problem is on a single axis or a double axis.  Try a test cube with your X and Y set appropriately and see if this is an X Axis thing, a Y Axis thing or an XY Axis thing.  Check the travel of X and Y and see if there are any difficulties.  If it's happening consistently be sure to watch the printer when it passes the layers with problems.  Cable snags sometimes only occur under certain XYZ combinations.  Small XY motions may get to a large Z before a problem shows up where a lot of XY movement may show a problem at a lower Z.

It's time to solve a mystery Scooby Doo.

Thanks Bob. I wasn't sure what to call it at the time. All my XYZ all move smoothly and has only happened on this models and only this last time on the orange one when changed to 0.2mm from 0.5mm. Like said have printed other vertical models that have been past the height where these occured and nothing wrong.

With the cylinder it does seem more like like it is a design issue because the cylinder slopes in on the outer diameter.

More perplexed on the orange one cause it is the same all the way from bottom to top (except for the top/bottom layers and the hole). They take a lot of filament, so not going to print off a bunch to test.

I'll just keep an eye out when printing and see if notice anything that might catch my eye. I'm thinking maybe a test print that uses most of the bed where have tall but small diameter cylinders (think of a bed of nails). Then if happens only on a certain part of the sheet maybe that can pose some more questions or answers. Maybe a XY test cube, but have printed several boxes in-between these and not one single bad print or defect.

Thanks for the reply, will keep Scooby Doo-ing it and maybe the Mystery Wagon will provide an solution.

If you want us to take a closer look save your project:  File > Save Project as   then zip the .3mf and post it here;  that way we can check your settings as well as the model.

Sure Diem! I have the white duct model already published on the Prusa 3D model site cause it didn't affect it's use. Then also included the orange model 0.05mm didn't have a problem with and the 0.2mm where noticed the issue. Like mentioned, on the domino tray imported the 0.05mm 3mf to the 0.2mm so maybe that was it's problem. Also, not sure if I changed the infill to 25% or just didn't catch it on the 0.2mm. It doesn't need it, but I let the print finish.

Right now went down a rabbit hole and found lithophane and decided to try one. It is printing with the bulk of length down the Y axis, very small X width in the middle of the plate. Almost finished and is about 90mm tall and looks normal. FYI

Thanks again for taking your time!

The duct is very thin and fragile in places, effectively just a single perimeter inside and outside with nothing between and your line might be at the point where the fine taper finally allows a third extrusion between, bracing the perimeters apart...

Remodelling with a thicker structure would improve your chance of a clean print.  As you have realised 0.05mm is a waste here and probably makes a weaker print; 0.2mm is the better option.

The tray also has no need of 0.05mm detail, 0.2mm is probably best.  I suggest making it thicker, currently there is a line that is also just two single perimeters thick.  Then I suggest using the thickness to add at least one more perimeter.

Finally I would rotate it 90 degrees on the bed, as it is the movement of the Y axis is waggling it across the narrowest dimension where it is least stable.

I see nothing in the settings to cause your issues but I do see factors that allow no place for the slightest inaccuracy so that anything that does occur becomes serious when it might otherwise have been ignorable.

Thanks for being so quick on this. I think you are right on the point here. Also totally agree that the 0.05mm is waste here. I have started doing only 0.2mm now for most stuff and that is why moved them over to that profile.

So will redo the duct and make it a little thicker inside and add a extra perimeter and change orientation on the tray.

Learned some tips today and by the way my lithophane came out really good (was crossing my fingers).

Noticed something else on the tray 'after' I was looking at it and some items I didn't change weren't default anymore so will also put them back to default.