English
Login
Forums
English forum
Original Prusa MINI & MINI+
How do I print this? (Printing help)
TPU with no stringing, how?

TPU with no stringing, how?

TPU with no stringing, how?

I run a small print shop and I've owned close to 25 printers over the last few years. Various brands and models.

I just picked up a new Mini a few days ago. I'm not new to Prusa or Prusaslicer though, as I have a MK3/MMU setup that's been a real workhorse.

I specialize in printing TPU, and that's where I'm having trouble with this Mini. For the life of me, I can't figure out how to get a clean print. Its either solid, but littered with strings, or underextruded and falling apart. I primarily print Sainsmart TPU, so of course I tried the Prusaslicer-provided profile, but it print waaay too hot and covers the print in strings. I tried adapting my MK3 TPU profile to the Mini, but that turned out no better.

Is it possible to get a clean TPU print with the Mini?

From doing a bit of reading here in the forum (I had previously just searched google) it sounds like I need to order the Bondtech upgrade.

I thought I had z-lift disabled, by unchecking it in the filament settings. Then it occurred to me that filament overrides were exactly that, they override the default printer settings. So I checked z-lift and set it to zero. Barely any stringing! 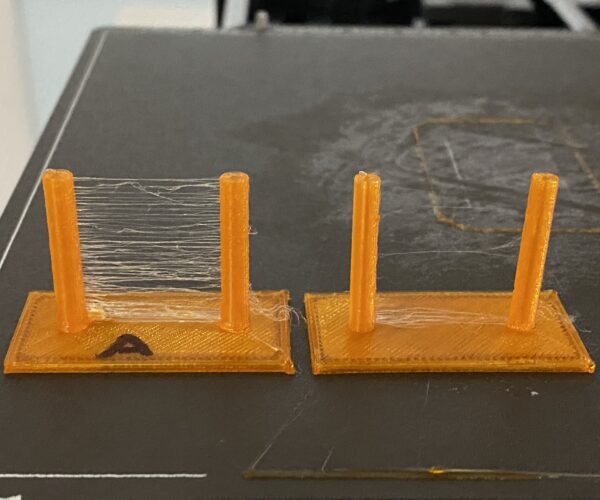 Here's a post that describes my experience with TPU.

Thanks for the advice! I read it and it makes sense.

I'm using Priline TPU and have been getting good results after early hiccups (gobs of strings). Early prints were inconsistent at best. I had used a temperature tower reference and, based on that, had set the temperature to 225 for the first layer and 200 for all other layers, with 50 C for bed temp. I had also enabled retraction at 0.8 mm based on comments on several forums and experimentation with the calibration. Results were usable but not good. I use temperature calibration towers when I get new filaments, but will probably not use one for TPU in the future (I'll use a small display cover to adjust settings instead; it's more realistic).

I also tried the generic Flex temps of 235 (first) / 230 (others) (with 50 for bed). I still had lots of stringing and blobs. I then tried lower temps of 215 / 215 (Priline says 200 - 230 range) and the results were better. I saved a filament profile for this (Priline). But I still had occasional blobs. I thought at first it might be seaming, so I set Seam to Random (in the Print settings): it worked OK but gave many small internal "dots" so I set it to Aligned position instead. This made cleanup much easier since most nibs were close together. But results were good enough that I decided to save a specific *printer* profile in addition to the TPU filament profile. When printing TPU lately, I use both the dedicated filament profile and the "TPU Printer Profile".

But I still wasn't completely satisfied with the results. So, I increased retraction (first to 2.0 mm, which resulted in missing spots) and then to 1.4. Note that this is a Printer setting. I've saved it as part of the special TPU Printer profile. I suggest you create a separate slicer filament profile for each brand of TPU that you use, so you can easily make small adjustments without worrying about resetting them for some other brand.

TPU printing is now quite clean, with very little stringing, and with good layer-to-layer adhesion. I use TPU for things like eye guards for instrument displays, so I get quite close to the printed results very often, and the settings above have (finally) gotten quite good, even when supports are needed. If you have a design with overhangs that need support, I suggest printing at smaller layer heights, such as 0.15 mm, even if you just need a trial piece. It's worth the extra time in my opinion.

One last thing - I don't have a printer enclosure, and I can see a difference when printing on cooler days than on warmer days. So an enclosure would probably help me to dial in the settings even better (and more consistently). Without an enclosure and on cool / cold days, before slicing, I increase the temperature for the first layer by 5 C and for other layers by 3 C (with a small Python script that modifies gcode, but you can do the same by just re-slicing).