Just wondering if anyone has had any discrepancies in their prints since updating their Prusa Mini's firmware to v4.3.4

I downloaded the new Prusa Slicer (2.3.3) to test out some of the new features and it was recommended to update printer firmware, so I did this. The first two prints went fine, although the hole diameter of the first print was wrong in the print. The next day, I started a 10 hour print, stayed with it for the first 5 minutes to ensure good bed adhesion and went to a family lunch. Upon returning, the build plate had been sheered and was now overhanging, half on the heat-bed and half off, my print was still going (off center), but needless to say I stopped it. Unable to place what had happened I cleaned the build plate and restarted the print. I was called away and about 2 minutes later I returned and saw the attached image on the build plate. At first i thought the filament was clogged or at fault but upon closer inspection my first layer calibration was now wrong, even though it had previously been fine on several prints prior. 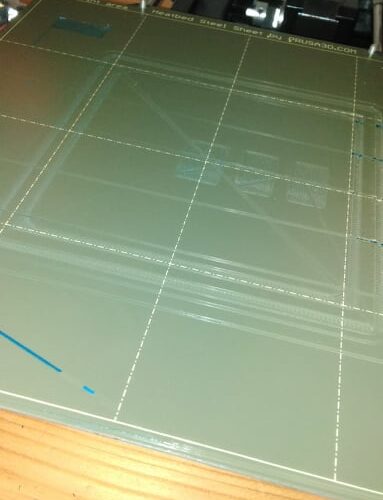 Prior to the first fault after installing the firmware the first layer calibration was set to -1.85. I wasn't ever comfortable with the value, but after reseating the SuperPINDA and running the calibration several times -1.85 yielded the best results.

I ran the calibration after the fault outlined above and now have the offset at .3

I'm curious if anyone else has had similar problems, or if you know of something wrong that I am doing to help me improve.

Update to the previous, I went to bed last night, turned off the printer and woke up today to get a long print started. During the calibration/bed leveling phase the hot end dug down right into the build plate. failing the bed leveling process.

No Issue at all. No need for calibration. Just upload new firmware from USB stick and launch print

I have recently tried a factory reset and re-downloading and then installing the 4.3.4 firmware. The first print last night went well, but I am yet to print something to check the inconsistency of the Z offset.

After upgrading the firmware I always do a reset to factory, now for the first time ever I get a failure on my x-axis (when I redo the test it keeps on failing)

I am sorry to hear that. I don't know if it will help but when i first got my mini I had a similar issue. I disabled the stepper motors and re ran the test and it seemed to work.