We're MINI owners since before Christmas, and I want to reflect our experience with the MINI in one post. There's good thread on what to do when you own an early MINI, so I won't repeat that. Also, I believe it's highly likely that second (shipping-) wave owners will have less unexpected behaviour.

Still, I was a little surprised about Josef Prusa's view in his blog post, as it does not reflect ours in positive and negative ways. I want to feed back our anecdote for every expecting MINI owner (quotes in italic, and I've left out parts in between that are not relevant):

The first wave of feedback on the MINI is very positive...
Ours is mixed, details below.

...and I’m glad people are starting to realize that the machine is much sturdier than it may look.
Fully agree.

Even after two months of internal and one-month external BETA testing, the MINI still has some teething problems as every new product. We already know what they are and how to fix them.
For us, external beta-testing is still ongoing; and even after that blog post, support seems to not recognize the root cause of error symptoms of -in this case- variation in first layer height for every new print job (see below in this post).

Rotary encoders on the LCD panel are the first on the list.
Ours works flawlessly.

The second known issue is that the MINDA mesh bed leveling sensor may arrive either misaligned...
We've needed to adjust the MINDA position when we assembled the printer, it was mounted too high. No biggie.

...or with a damaged cable – this is caused by the zip tie securing it to the X carriage.
Not sure if the cable was damaged when it arrived, but the first MINDA failed after ~33h of printing with (at least) one broken wire. Also, the location of the damage in the wire would allow for an over tightened zip tie. The replacement MINDA (let's call it No. 2), we've received from support fixed this issue.

... This kind of damage is usually caused by shipping, e.g. when the box has to survive some very rough handling.
Not sure what Josef deems as root cause - the tightened zip tie or the rough shipping? (Replacement-) MINDA no. 2 arrived shipped in an air cushion bag in a cardboard box, and I've assembled it with the zip ties tightened only so much, that the friction between tie and harness was so low, that you could still rotate the harness without extra force. No. 2 failed after >50h of printing with the same symptoms of No. 1: failed mesh bed leveling. No. 3 -shipped in a package similar to no. 2- has not produced one successful print, and is awaiting analysis by P/R. The error symptom for No. 3 is that mesh bed leveling before every print has different heights; ie. they are too low or too high. The one I'v set in the original 1st layer calibration will not reproduce, neither will those I adjust in between.

We also received several complaints stating that the electronics box was cracked.
Ours arrived undamaged.

...the possibility that the MINI can scratch your table – this is caused by the screws on the bottom...
Also, no trouble here.

...the current owners have already confirmed, the machine can produce some really amazing prints.
Absolutely!

To come back to 1st layer height/mesh bed leveling issues: I'm not sure if P/R is fully aware about the root causes. We've certainly had broken conductors in the MINDA cable. Different probing results may mean that conductors don't fully conduct, or sensor signals/interpretation is distorted in some way.
If the moving print head harms the cable harness, other cables could have trouble too? Or is the MINDA cable more sensitive that the others? Or is it more sensitive than expected/specified by P/R? Our printer trouble with No. 3 suggests that (if this is a MINDA issue at all) it arrived broken, or didn't survive careful assembly. For now, I do not have the impression that P/R really knows what they (all the root causes) are, and how to fix them.

Thank you for these detailed insights. would be great if other early birds would give us their opinion, too!

As I ordered on 15th seeing the issues other users have I  actually still hasn't decided whether to keep the order or wait and collect some more founds for mk3s.

Could you kindly share some pics of your prints from Mini?

These are from the first few days of having my Mini

Prints are even better now that i know more 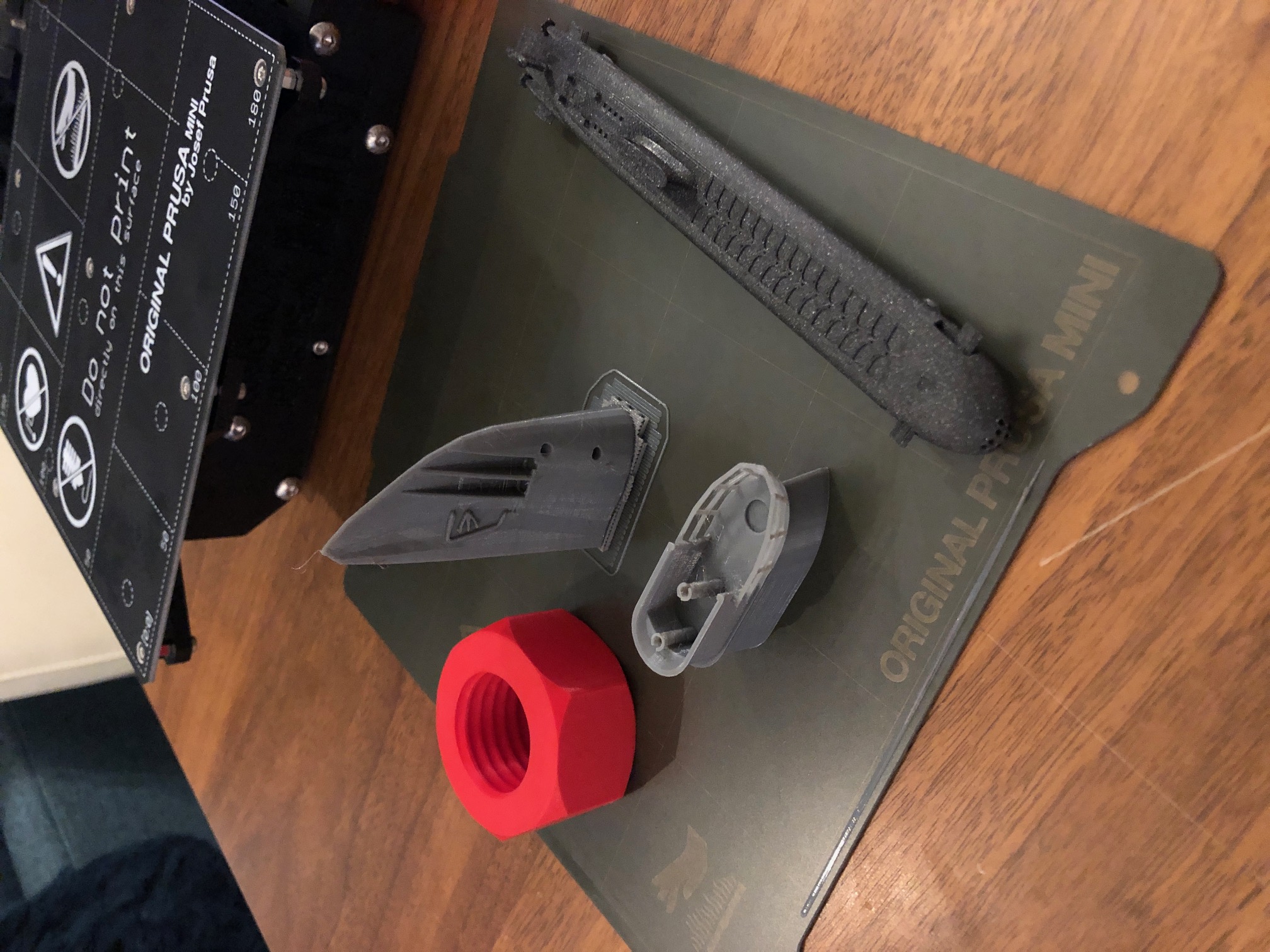 I'm a newbie but already i love my Mini

My Mini worked almost flawlessly for quite some time but now it seems that the powder coated PEI sheet has lost its stickyness. I somehow cannot get standard PLA to stick to the bed, even when applying Magigoo. When I switched to the PEI sheet the same filament sticked absolutely perfect to the surface.

Could it be that printing with PLA/PETG copolymers (I used Extrudr Biofusion filament for quite a lot of prints) may cause the powder coating to be damaged after some time? I did not see any damaged spots on the powder coated bed though - just wondering what may have damaged the stickyness of the surface :-(. Will need to contact support for this one.

Try giving it good scrub with dish soap (don't use your regular dish sponge though) and a lot of hot water; dry, then alcohol.

@crawlerin - yeah, thats what the support guy also recommended. Tried that, solved the issue. I did not notice that soo much stuff was on that build plate as I quite regularly gave it a wipe over with some isopropyl alcohol. Apparently sometimes good ol' dish soap with warm water is needed ... apart from that - quite impressed by that little beast. Especially - its soooo quiet 😉

In my experience this happens when you have printed PET-G and go back to PLA. Hot water and curd soap, drying, then using Isopropanol and back on the heatbed and heating the spring sheet (as I understood you shouldn´t put the textured sheets into contact with water because of possible corrosion) on the bed for some minutes.

That is the way I do it - most of the time it is working. Very seldom it can be necessary to print one layer on the complete sheet with the material you want to print your part. It looks like that there is allways a small amount of material sticking on the sheet, even you removed your part.

I use the dish soap (washing up liquid to Brits) method on both my smooth and PC sheets for my mk3. It is not the total solution (ask 10 people and you'll get 10 different answers), but it is the method I've found to get the most improvements with lifting. That and putting rounded corners into my designs as far as possible. No doubt I'll need to do the same for my Mini.