This is a new test release of PrusaSlicer. Please note that this is dedicated to moderate to experienced users.

This is the fourth and hopefully the last alpha release of PrusaSlicer 2.3.0, following 2.3.0-alpha1, 2.3.0-alpha2 and 2.3.0-alpha3. This release introduces several new features, fixes bugs found in previous alphas and contains many additions and fixes in 3rd party profiles.

To let you enjoy the alpha without worries, the alpha builds save their profiles into PrusaSlicer-alpha directory, so you may use the alpha side by side with the current release without ruining your production configuration.

Improvements with respect to PrusaSlicer 2.3.0-alpha3

What is in the working

Nice improvements and features. Thanks to the dev team.

This is a new test release of PrusaSlicer. Please note that this is dedicated to moderate to experienced users.

We look forward to your feedback!

Thanks for the numerous information! I allow myself to link to alpha 4:

I tried to slice some simple parts with the alpha4 version, but unfortunately PrusaSlicer crashes regularly right at the beginning.

Just tried a single slice which was OK. Tried karl-herberts examples both crashed.

The "crashparts" can be sliced without problems in V2.2.0. Some other parts do not cause any problems either, not even in 2.3.0 alpha1. So I assume that it is not due to the configuration of my W10 laptop.

Does anyone else have problems with it?

@karl-herbert,  here Linux Debian last update, both crash with alpha4 when slicing start, BUT with PrusaSlicer 2.2 they can't be opened, PrusaSlicer says "ConfigBase::set_deserialize()failed", no crash, bed is empty. An other 3mf file open without problem.

That may well be possible because I saved the project files with the Alpha4. I am providing the same components here as a 2.2.0 project:

The last 3mf files are different from the first ones, mmu or not and layer height. They open and slice fine in PS 2.2 and PS 2.3 alpha4. The crash appear with a layer height greater or equal to 0.1 mm.

This post was modified 2 years ago 2 times by Loak

I'm glad you figured that out. But I think there are still some corrections to be made here if you don't want to work with layer heights <0.1 in the future.
I will forward this to github.

Yes, but forward your 3mf files too (I think you will), because the 3mf and STL I have slice whatever the layer height is.

I have already sent the alpha4 crash data to github and curious what will happen there. I am not the only one with this problem. In the meantime i will work with 2.2.0, which runs without problems.

That may well be possible because I saved the project files with the Alpha4. I am providing the same components here as a 2.2.0 project:

Was curious, I opened your attached projects and slice with Prusaslicer 2.3.0 alpha 4. 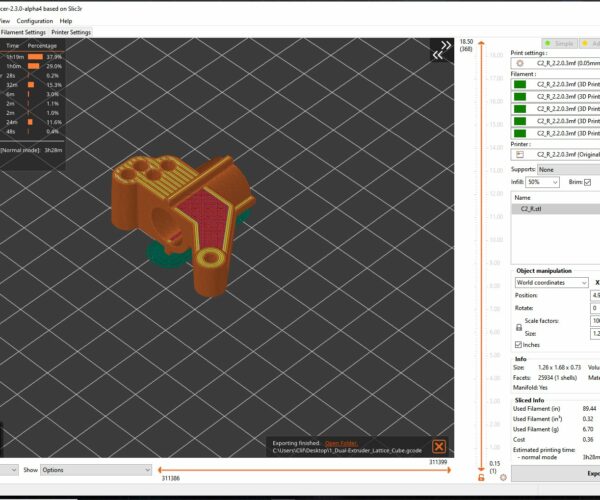 Neither crashed, Is there something else I need to duplicate the crash.

No crashes and It appears to be improved.

The problem seems to be fixed. but i have not tested it yet.

I assume anyone who has tried this recompiled it themselves?