Still working on it. Waiting for filament to get here. Teeter totters in but need cam adjusters installed for limits. Magnet lift wheels are done and working. Will send videos soon.

Test run on teeters. Need some minor adjustment so balls won;t close the gap on each other.

During the height of the pandemic, I amused myself when I had time, by building a few of the 'marble' (actually ball bearing) machines.

Nothing as elaborate as you have, but (left to right in the photo) a spiral lift wheel, an auger and loop-the-loop, and a circular elevator and spiral slide.  And as a bonus, you get to see my (both late, unfortunately) dad and stepmom, all displayed on a bookshelf in the home office. 🙂

All of them work reliably and continuously and I've amused friends and family by demonstrating them.  All of them have a motor and power booster and will run with a common power stick or else a common micro-usb brick-on-a-string. 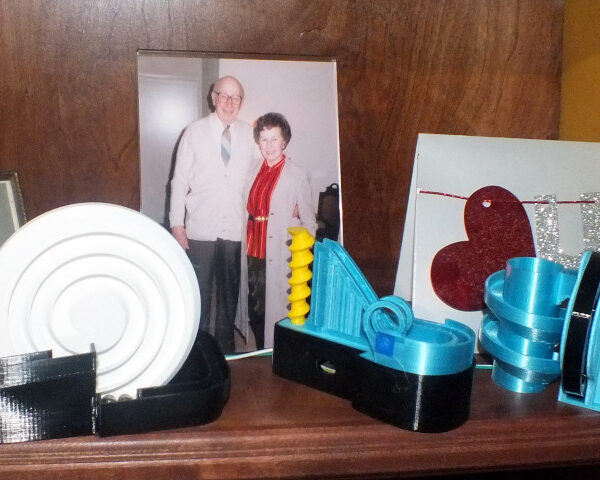 Nice,  fun isn't it. Waiting on a new print head here... mine shorted out.

One thing that I would like to (draft maybe) and make is one of those very convincing 'perpetual motion' 'marble' (ball bearing) machines that are sold at novelty shops.

If you have not seen these, they have an elevated 'dish', for lack of a better term, which has a hole in it and a 180+ degree track along which the ball bearing free-falls (or appears to do so) and then launches back around into the dish and repeats the cycle over and over.

It all appears to happen with no external input and no power, but in actuality there's some hidden wizardry that makes it work.

I've seen two versions, one has a motor and a revolving paddle wheel kind of thing in the hole in the dish, which gives the ball bearing a swift push as it falls, and the other has a fairly strong pulsed electromagnet in the base which gives it a boost when it's in the third (cartesian) quadrant (for lack of a better term) of the track.

The pandemic started winding down and I did not have nearly as much idle time, so I put this way on the back burner, but it might be a fun project to do some day.

Ended up having a torn rotator cuff that's going to need surgery, hopefully in 2 weeks so the project has slowed down a bit. I added some features that are not quite finished but I'll post pictures later today.  They include a magnetic (3) wheel lift to aprox 24", a pachingo board (sorry if I spelled it wrong) and I salvaged the cat track that I was going to use on the bobcat model which will become a lifting device. I finally developed a marble pump that works flawless and I will show that when I can get it assembled, should be late today or tomorrow. I needed a push pull solenoid (long throw) for the upper portion of the pinball machine but China returned it to the manufacturer and they refunded my cash instead of shipping it again. Took over a gd month to get this far with the order and now I'm out another month or so waiting for a new shipment from someone else.

Looking forward to the pictures. Will be great to see the improvements. Hope the torn rotator cuff works out. I know getting stuff shipped from China can be very frustrating I've been down that road myself. Sent you a PM.

Some pics of the partial pinball (pachinko) and the magnet wheels and unistalled track.

Some pics of the partial pinball (pachinko) and the magnet wheels and unistalled track.

That is quite the contraption.

I remember playing Pachinko when I was stationed on Guam, decades ago.  I've only seen it once in the States.

I'm going to Defcon in August and one contest they have is for a Rube Goldberg data transfer kind of machine.

Prolly don't have time (or skills) to do something like that for August but something to dream about!

Thanks for the link. There's some ideas here that I can use.

OMG! Something like that would be super! Thanks! Looks like that is a kit or commercial product, but if you could take that design, 0 bits go one path, 1 bits go another path. I don't know if I could do something like that for August but it might be worth trying.

Got the 'tank/cat' track trial installed and it works fine. Need to adjust 'belt' tension and glue magnets to the track. I opted for the track instead of a belt lift because the track had enough 'flat' area on it to glue the magnets on without any risk of binding.

There will be a small problem with the magnets magnetizing the metal balls. I'm designing a separator to space the balls sono more than one at a time are picked up by the magnets. I could do a de-magnetizer but I like moving parts better. 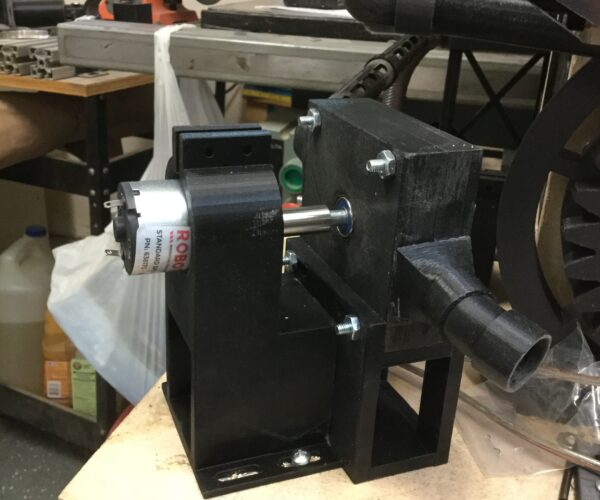 As I explained earlier, there would be a problem from the metal balls getting magnetized. This is one of the 'separators'. The 6mm shaft motor is coupled to a 1/4" shaft. The motors are adjustable for speed which ill allow me to adjust the space between the balls. This 'space' will also prevent more than one ball being picked up by the magnets on the lift mechanism's .I will send another pic of the inside of the separator. 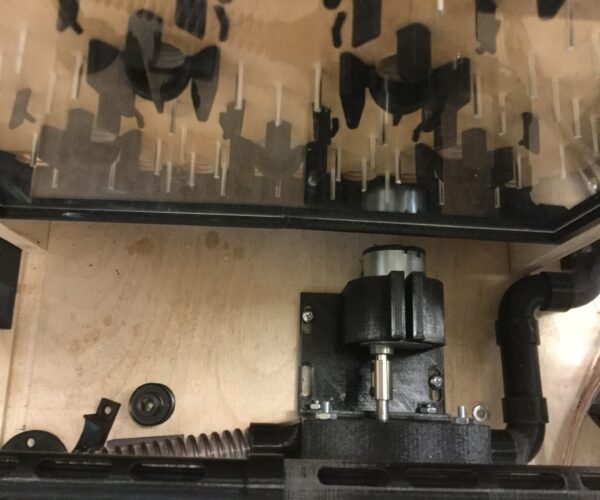 Top view of the coupler and seperator (1). 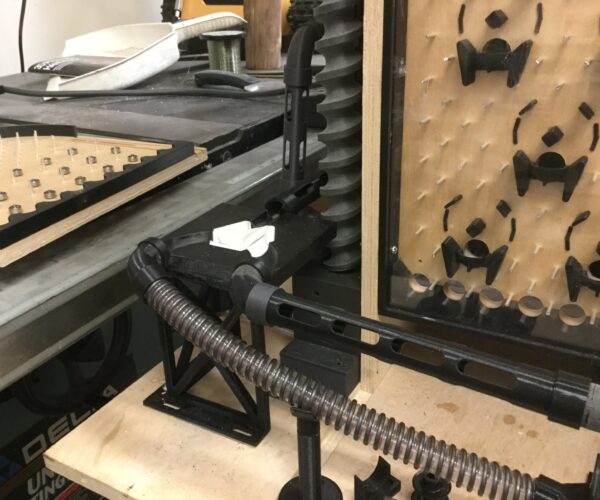 This is a flip flop 'gate' which allows me to alternate between separators. There are (2) different lifting devices after this gate/switch. The flexible hose is salvaged from CPAP replacement. (Never throw that stuff out, never know when you can use something like this). 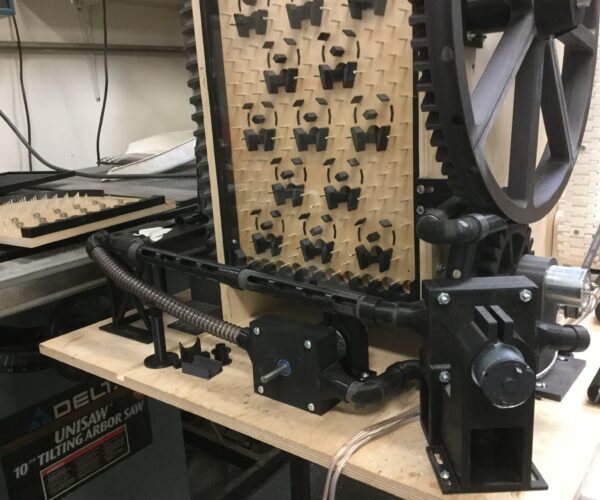 Another view showing both separators. I need to start fastening everything in place. 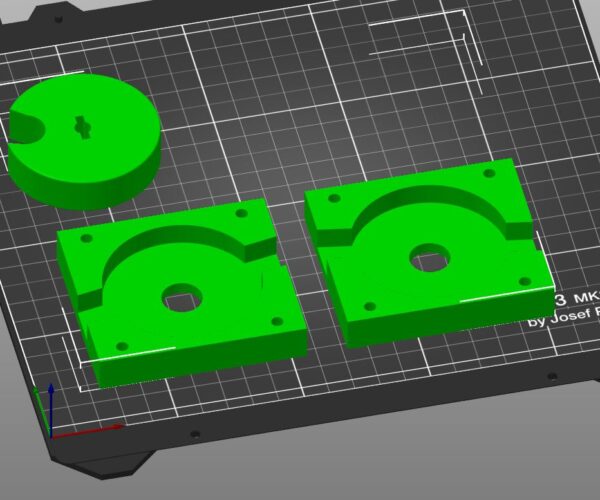 Separator parts. The larger holes are for 1/4" bearings that have a .625" o.d. The shaft is 1/4" aluminum drilled for a 1/8" pin that 'locks' the disk to the shaft. Ball is picked up on the high side and exists low with gravity.

Had rotator cuff surgery on Monday so progress will be slow for awhile. Am working on a ball accelerator that will launch the balls up an incline or through a hoop.