I've been looking for a good Prusa Mini Enclosure. Since the official Prusa V2 is mostly for multi-material upgrade and the MK3, I was considering the original design. The thing is that the plexi is quite expensive. So I was imagining using some cheap foamcore boards from the dollar store on the back and the sides when I saw a post about using the FABRIKÖR as an enclosure. Maybe it could work for the Prusa Mini without removing the back glass?

So, on the IKEA website, the size seems alright. The depth is 18 1/2 " (47 cm) and the maximum weight of each shelves is 11kg. Turns out that the weight of the Mini is 7.4kg and the depth of the Mini (including the Power connection#Wire) is somewhat 17 inches (to be confortable). Looks like a fit!  Trying my luck, I seached the local Kijiji ads and I find a FABRIKÖR in perfect condition for 150$CAN (108$US). Ok. I'm in. Fast forward to the basement with the FABRIKÖR: 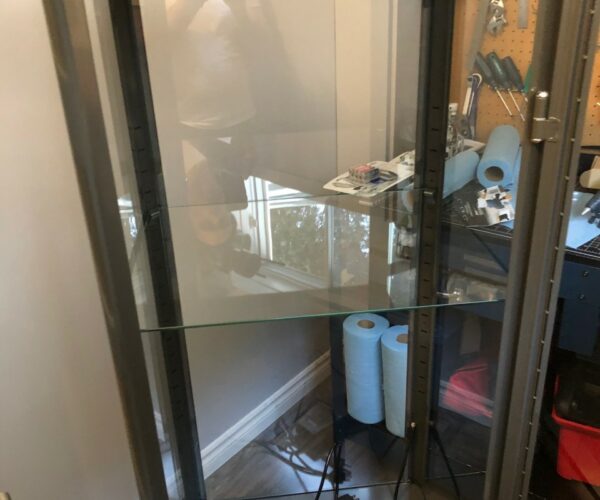 Actually, well..., I forgot to look closely and the unit depth is around 15 "... The 18 1/2 " is for the legs. Well, it is in the basement, so let's see what is possible. I turn the unit sideway and works like a charm. Actually, it gives me a good access to the filament, the USB connector and I'm able to operate the Controls. Of course I would have like it to fit in its natural orientation, but I guess it can work: 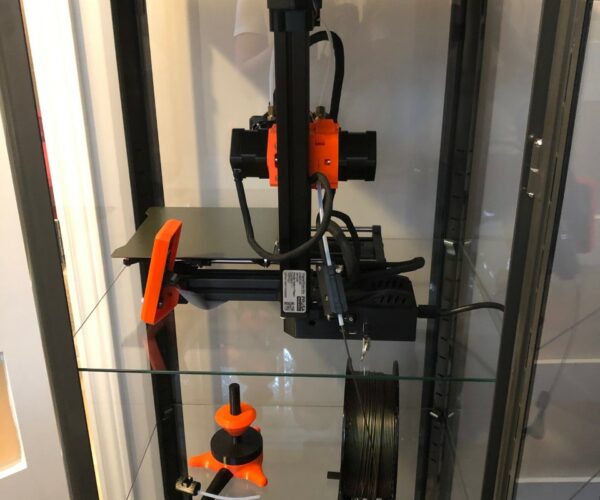 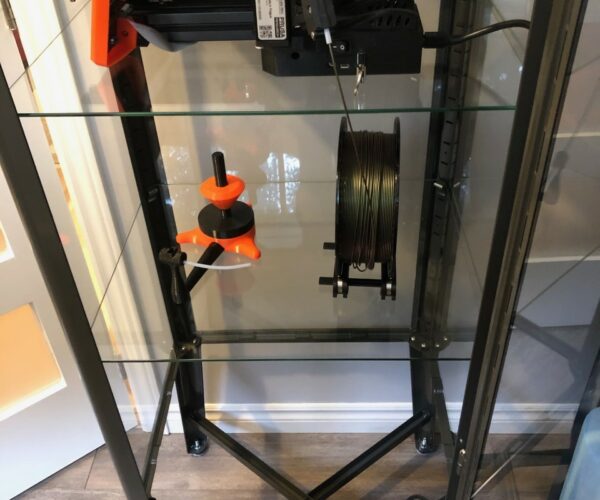 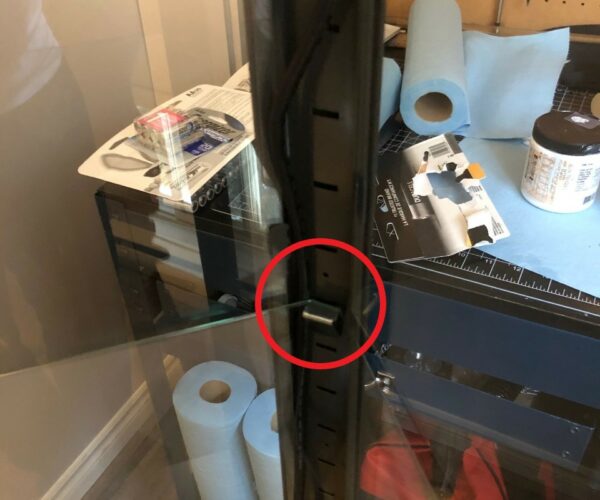 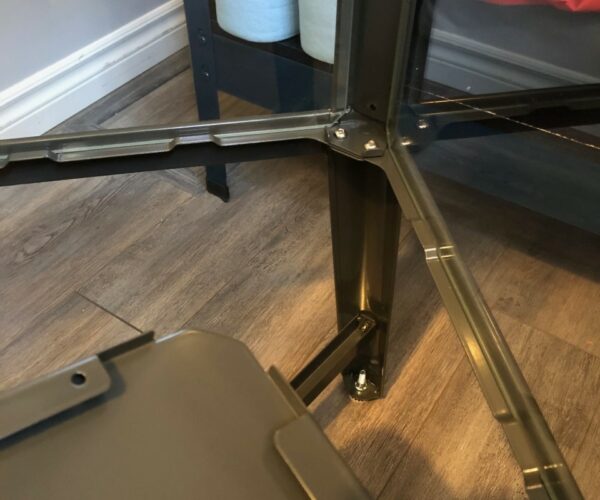 So the corner (red circle) allow for the power cord to fit correctly (it is not squeezed), but the bottom does not leave any room for the cord to go out (the above pictures shows the bottom without the plate). Well, it looks like I will have to cut a hole in this nice looking bottom plate. I don't have many tools (Dremel, regular drill), so I'm hesitating at the moment.

So, If you have any advice or idea, please share. I'll post a picture if I manage to optimize further the enclosure for the Mini. I plan to add some lightning. I will have to think about the airflow and a temperature monitor as it is quite efficient at keeping air inside (even if the glass is not sealed to the frame) and the heat build up could become an issue (or at least it could a QA test for the nozzle fan).

I plan to add some lightning.

It's not that hard !

I was looking at that one but was concerned about sizing.  Thank you for posting that so we know it will fit.

Since IKEA is closed, I have not been able to go take size measurements but I was going to look at the Hemnes and Brimnes, both cabinets with glass doors, once IKEA opens back up.  Of course, you can get them shipped but shipping is outrageously expensive, so I will wait.  Right now I have an IKEA plastic bin that I cut a window out of around it for dust protection in the interim.

Strange women, laying in ponds, distributing swords, is hardly a basis for a system of governance!

@kurvalak Neat looking! I was looking into the same shelf for the same printer, but I was thinking of putting it on a cork board + concrete tile at the bottom of the unit.

Is printing in the enclosure noisy? Does it rattle the glass or the frame?

If you have printed ABS or PETG, is there a lot of leakage of the fumes?

1) Would the mini fit facing toward the door on the bottom shelf?

3) Did you manage to make a hole to wire the unit?

Are you worried about fire hazards? I was thinking of putting the filament under the unit in Dry Boxes and routing some PTFE tubing to the printer.

Thanks a lot and Best regard!

P.S.: It looks like the cross bar is mounted upside down, from the ikea site the screws are not supposed to be visible.

Since then I went for an LACKEnclosure, but I think I could have some information relevent to your questions.

- It is not noisy, but when the printer is on a higher shelf, it can shake the cabinet, so since the glass are not sealed, it could create a rattle sound. That said, I did not notice much noise when I was using it.

- I did print PETG, but not ABS. The cabinet is pretty good a keeping the fume inside. There was not much smell outside. That said, it does keep the smell/fume inside too well. Without a way to vent the air, you will have to clean the inside from time to time to reduce the smell.

- I did not try to position the Mini at the bottom. Even if it fits, you will have to find a way to stop the extension of the plate at the end of the print.

- The bottom plate is made of metal and connect well to the base of the unit (and the feet). It is pretty sturdy, but I think 15k would be pushing a little. That said, you could probably add some brackets/bar to secure the plate.

- It would have been easy to do a hole as the metal is not that thick. A dremel would do it. I left the base open (or the door) for the time I had this cabinet)

- From a fire hazard perspective, since the unit was entirely made of metal and glass, it should help to prevent the fire to spread fast, although the distance with walls or other cabinet would still be an issue in case of a prolonged fire. Again, the unit is pretty good at keeping temperature and fume inside and I would be worried at keeping a constant temperature and not too hot with an active drybox under the unit.

- For the screws that are visible on the picture, if you refer to the ones at the bottom in the corner, once the bottom plate is in place, they are hidden.

When I had this cabinet, I was mostly thinking at the cable management, but after a while I realized that an air venting/recycling mechanism would be necessery. I would have been possible since the top and the bottom are easy to work with. Since the Cabinet was intact I choose to sell it for the same price and went for a LACK Enclosure. Still working on it. Only complain with LACK is that is is light as a feather. FABRIKOR was sturdier. 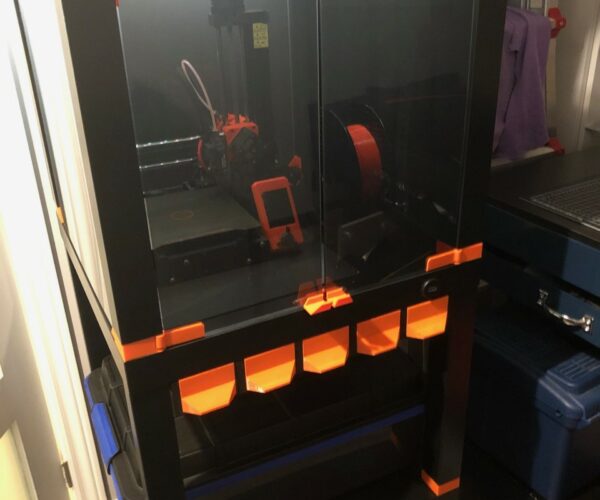 Hope that help and I wish you good luck. I had fun tinkering a little bit with the FABRIKOR enclosure and I did not regret trying it. You could bring the idea to the next level !

Thanks a lot! That is helpful to know! I had the idea of  making some passive drybox with dessicant and running a PTFE cable from the mini to a port on the bottom, and connect the right filament box to that tube. But it would probably make sense to store the filament in the enclosure, except for the fire hazard.

I meant the cross members to which the PSU is zip-tied in your photo.

Hi folks! I'm a full time van-lifer and I was looking to buy a prusa mini to fit my printing needs,

I wonder: what's the tightest enclosure i could build to fit this printer in my van? (obviously small space).

What are the maximum dimensions this printer needs to be safely operative?

There is some dimensions on the prusa site:

I have an original Mini in a 12U rack that works but it's obviously not compact at all and there is a lot of space to the sides and above, however the front to back dimension is about as tight as I would go. Internally it's about 44cm from the back of the enclosure to the inside of the glass door. I could probably shave a cm safely but the heat bed cable would be bent a lot when the Y axis is at 0, and the power cable would also bend more. Would probably work.

For the other dimensions I measured the width with enough space for the cables at 36 cm, but you better have smooth walls so the Z axis and filament sensors don't catch. The USB key could be inserted at the end of a USB extension, by obviously accessing the power switch would be a delicate operation.

Photos is with Y axis at 0. 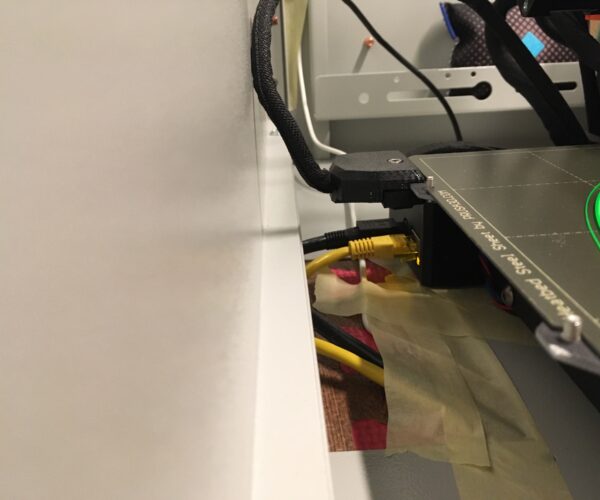