Bridge perimeters are printing in midair?

Bridge perimeters are printing in midair?

i'm experimenting printing bridges in PETG, trying to get the settings right. i've been really staring at the bridge as its being printed. i've been noticing that the outer bridge perimeter starts by printing a tiny, thin wisp of a line then it becomes fat. and i thought maybe i don't have the de-retraction set right (still not sure how to set that right).   i'm not sure if its a setting or what, but i thought it would be neat if the program could show it to me as a graphic. so i tried it and zoomed in: 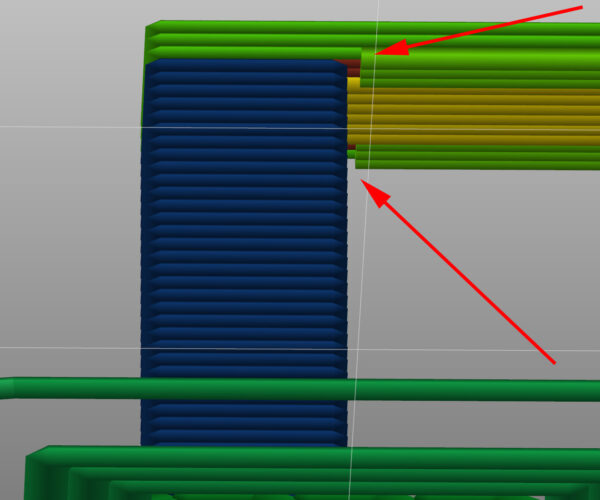 and saw that there is a gap under the first main perimeters. what would cause that? why is that a thing or could be a thing? they do stay up, but they also sag quite a bit and they aren't a good start.  the filler prints ok though. 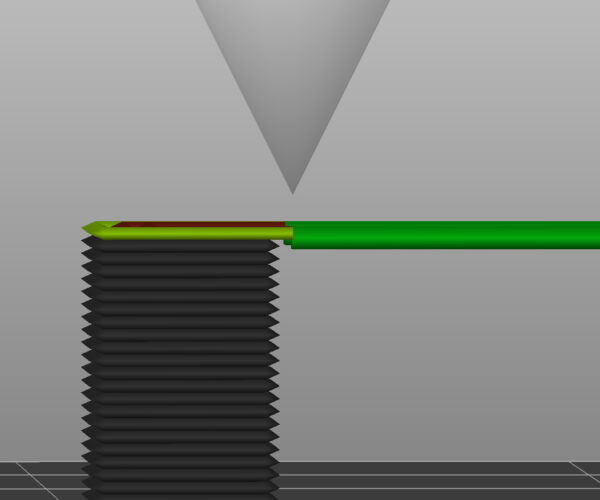 if i draw it out, it seems to be showing a slight extension from the wall, but i don't really want that gap there. i included the files. is this a bug? or do i have another weird setting that needs to be patched up.

The biggest problem is you have THICK BRIDGES enabled.  Turn that legacy, no use setting off.  Its the biggest contributor to the crap bridging that all the Slic3r derivative have a reputation for.

On the pre 2.4 versions the logic is that as any bridge is not printing on the layer below then it will have a circular cross section rather than oval.  So the assumption is that the layer height and width for bridges will match the nozzle diameter.  Which is why they are 2 layers thick in the preview. Thats anything not on the layer below.  So areas above supports etc too.
Its not a layer that is starting in mid air with a gap, it is a perimeter that is starting with the assumption that it is 0.2mm high (your layer height)  that then changes to a layer height of 0.4mm (your nozzle diameter).  While that logic is correct and may have applied once and for certain materials still does, its a case of printers are better now days and while the layer will be slightly thicker, its not as much as the assumption as its 'stretched' as it goes along.

Thankfully they gave us the option to disable that logic in 2.4.  That extra thick flow giving you the thick line is detrimental in most cases in real world scenarios.  Also understand that and perimeter not sufficiently supported gets classed as a bridge and not just the type from your test model.  This causes other perimeters that fall under that logic to also be printed thick.  Its why I always used to turn bridging completely off on the pre 2.4 versions.

Unless someone comes up with a creative scenario thick bridges should be turned off , always.  I haven't found a single use case yet where having it turned on works better.  Unfortunately its on by default to keep the logic/slicing the same as the 2.3 and earlier versions.  To not 'break' compatibility.  Just turn it off and never look back.

For some reason PS has decided that the actually bridging cooling and flow starts out from the normal perimeters.  Go ask them for their reasoning if its causing you problems.

Also as a quick note Mike, your projects now throw up an error warning in PS 2.4.1 beta 3.  They have put a check in for having G92 E0 in the layer gcode which is needed for relative extrusion on Marlin.  Your setup doesn't have that, which means over time your extruder will accumulate floating point errors which will lead to deteriorating quality in prints that have many layers.

i couldn't figure out what thick bridges did.

hmm.. how do i fix that error warning? i'm still new to this only been printing for a few months.   do i just add that code some place?

Yes, you add a line of gcode into your printer profile settings.

Go to - Printer Profile>Custom Gcode section and in the Before Layer section you add
;BEFORE_LAYER_CHANGE
G92 E0.0

Then save your new updated printer profile.  That command will reset the relative extruder count at every layer, removing the accumulated error.  Its not needed for Absolute addressing and it looks like its only something that Marlin firmware has a problem with.  The built in Prusa printers profiles have it already.

General degradation, when its extruding the values are to several decimal places for precision, over time you lose precision due to the error so you will see slight over extrusion or under extrusion in places, depends entirely on the geometry being printed.  Its not one of those things you can look at and say, oh yeah that's caused by X.  Its more subtle than that.  For smaller and simple things you will never even notice it as its not a big enough factor.

its something i would see later on i guess. right now i'm trying to get the program set, so i can print tools with this stuff. trying to get all the temps etc straight. right now my goal is to get rid of lightning bolt strings. no matter what i do i can't shake em. i'm going to print out a wall test and see what's up with that.  and with any luck once that's fixed i can try models again.