I've had the prusa MMU2S for around a year now. I have to admit, this will never be usable by normal populous until they work out these problems. This printer has had such an unbelievable amount of problems that honestly I'm surprised its still available in market with how completely inconsistent this is. Don't get me wrong, I'm not here to bash the printer. When this is working, it makes prints so amazing other printers look stupid. But this printer has had me on the edge of anger and despair more times than I could possibly count. and I absolutely mean that.

To the point, the latest problem I have been having is that for whatever reason, there has been a ton of friction in the filament-pull system, or at least I think. To be specific, my prints come out as really poorly done, basically it's spitting out filament, but it seems it isn't extruding fast enough to keep up with movement. Basically the print is still made, but it's really weak as the there are small missing layers here and there and the outside perimeter looks pretty unpleasing.

This is particularly odd to me because this wasn't a problem before and I haven't made the printer move faster, it's like it woke up one day and can't pull filament fast enough anymore. After a few weeks of experimentation, it seems that it's struggling to pull in filament as fast as it can use it.

To help this, I tightened the screw for the bontech gears on the extruder, hoping to give it some more pulling power. However this hasn't really helped at all. For whatever reason, the top MMU2S block doesn't seem to actually feed the filament into the extruder during the prints, it just kinda moves the bearing out of the way so there is less resistance for the extruder to pull it seems. I've tried loosening the screws on the MMU2S unit so that the bearings don't press as hard on the filament, but all this does it cause the filament to get stuck when its loading filament for the print. I've tried to tighten these top MMU2S unit screws so that the filament will actually load all the way for the print, but this seems to create more friction in the system during the print and the extruder isn't able to pull the filament fast enough during the print. I also thought that maybe it had to do with the PTFE tubes being coiled and the spool being in an awkward angle to pull and this was causing friction. However I cleaned up the setup so everything is very streamlined. The spool is on the rolling mount that comes with the MMU2S and the inside of the PTFE tubes are very clean and slick. It feels very easy to manually load the filament and very little resistance for filament to be pulled, however despite this, the extruder can't pull it in fast enough no matter how tight the extruder bontech gears are and no matter how loose or tight the top MMU2S Unit screws are.

I'm a loss here and I'm really not sure what to do. I've even attempted slowing down the movement print speed in the slic3r during prints and this helped slightly, but not enough to be called even a temporary fix. Any ideas? Oh and I've already updated all of the firmware and using latest prusa slic3r

Did you get this fix already?

This sounds like a clogged nozzle to me, not a MMU problem. The MMU doesn't feed the filament during prints. It only loads it to the extruder and than the extruder takes over and the MMU releases pressure in the filament.

Have alook at this:

anger and dispair?  yeah sounds about like my story lol   However   as recently as yesterday, with baklin's help, I may have turned a corner.

I was having the most strange issues even with reworking the filament path to be as short as possible.  But Baklin suggested reflashing firmware, and I'm cautiously optimistic this may have improved things.

I printed this test print overnight without a single intervention. 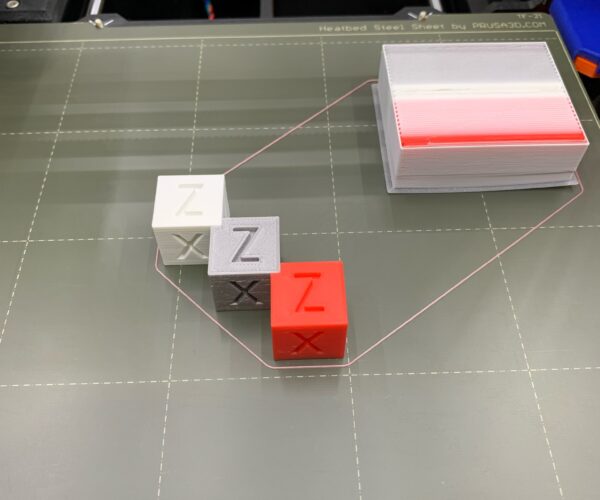 I sliced this with the 2.4.0 alpha of the prusa slicer mainly because I had been messing with it for the mmu painting capability, which is awesome.

This was a ~7h print.  and it worked perfectly.

I'm now doing a lucky cat(mankeki neko)  that I painted in the 2.4 slicer as a 14h test.  I think if this works it will a positive test since the previous 5 attempts at the cuddling owls all failed.  Here's the setup I'm printing with now, that seems to be working.  there's enough space for the filament to be retracted to in order to avoid tangles.  The little ptfe tube holders are somthing I designed and they are printed in ninjaflex on my non-mmu printer. 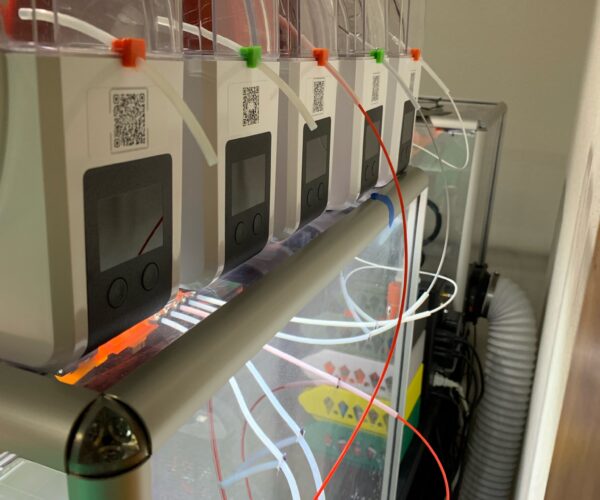 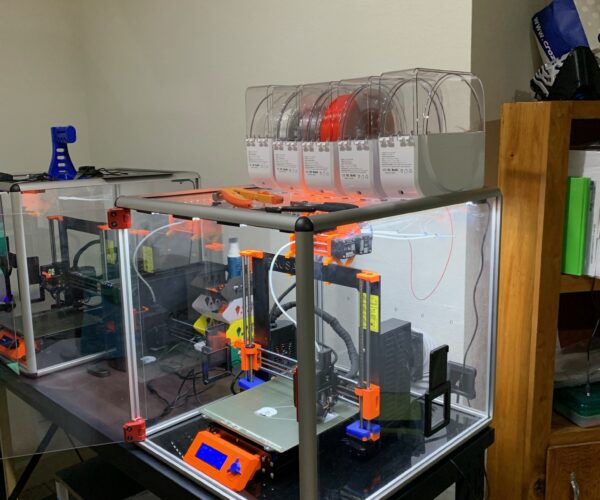