Just a data point here.  We had some excitement tonight.

I've had the MK3S for some time now, and when I installed it in its permanent home, a counter top in our home office, I added an el-cheapo Best Buy UPS.  Nothing special, just the battery backup unit that was on sale that day.  I figured that it was good insurance from power blinkies ruining a multi-hour (multi-day) print.

Well, a couple hours ago I had a print running and storms approached.  WHAMMO!  OUT!  Dark!  Entire development and more out.  On the map below you will see that one dark blue "almost everybody out" sector.  Well, that's us.

Fortunately we have a backup generator (Generac, and yes, I agree that their infomercials are obnoxious) but it's not an auto-start model, so I had to futz around in the dark groping for a flashlight, hit the start button on the generator, and groooooan ... g r o a n ... pfffft!  Battery dead!

Out to the garage and hunt for the jump box, hoping it has enough oompf to spin the generator.  It did.

All in all, it was a good 20 minutes from lights out to lights on.

However, the MK3S with the Best Buy Bargain Basement UPS did not miss a beat!  The print is still going and should finish in a couple hours as expected.

Just a data point here for those who have a similar setup. 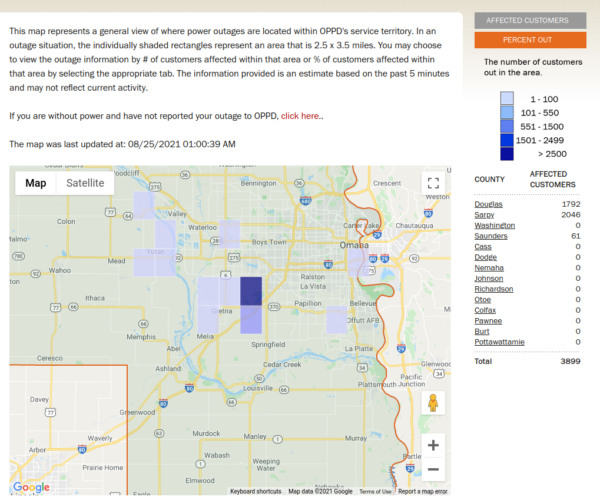 I own a could several el cheaps, Cyberpower, and APC units and they have treated me really well.  Cost really does not matter with 3D printers.

I also bought a Harbor Freight cheap generator.  It has been a godsend on long outages.  It may only work with 1-2 printers, but it will keep those longer prints going.

I own a could several el cheaps, Cyberpower, and APC units and they have treated me really well.  Cost really does not matter with 3D printers.

I also bought a Harbor Freight cheap generator.  It has been a godsend on long outages.  It may only work with 1-2 printers, but it will keep those longer prints going.

Overall, I've had poor luck with UPSs over the years.

Batteries are the big bugaboo, and it seems like they are the first thing to fail and you don't know that it's failing/failed until the power goes out and what it's supposed to be protecting goes dark.

I've also had issues with equipment (PCs, network gear) that can't take a joke and shuts down or gets into a funky state due to the glitch when the UPS switches from failed shore power to battery power.

The worst one, however, was a cheaper APC (I think, not 100% sure) unit which did work well for maintaining power, but where it was impossible to shut off the power failure alarm beep without using a very clumsy PC app via the USB link.  That's right, if you did not have it cabled to the PC and the power went out, your only remaining option to shut off the beep was to gracefully power down what it was protecting, turn the UPS completely off, and power it up and reboot. 🙁

I ended up pulling out the battery from that one and used it to replace the failed battery in another unit, and just trashed the UPS.

The best one I have is the one that's in our network closet, which is an 'online' Tripp-Lite unit which powers the load via the inverter continuously and therefore does not have a so-many-cycle glitch when the power goes out.  This one normally sells for well over a kilobuck, but I was able to pick it up where the owner just wanted to replace it with a newer unit rather than to replace the aging batteries.  I went to a local battery vendor and got the replacements, which actually cost more than I paid for the used UPS.  Of course, that one did not miss a single cycle last night.

Another el-cheapo Cyber Power is on the Ultimaker S5, and although it was idle at the time, it was powered up and did not reboot or go into a funky state.

And this morning I have to futz around with the generator to see why its battery was useless last night.  It's supposed to be on continuous trickle charge.  I have a feeling that the battery itself is end of life, as the generator was installed when we built the place back in 2015-2016, which would make it over five years old.  I'm expecting that when I remove one of the connections, I'll measure a good charging voltage, and that the battery itself is the culprit.

Fortunately we do keep a (hopefully charged) jump box out in the garage in case one of the cars needs it, but as was proven last night, it works with the generator too.

All in all, they buy me about 20 minutes of runtime, and I only need about 60 seconds to switch over to my Generac 18KW propane standby generator.

I have a smart grid disconnect and transfer switch, and my 18KW is an AutoStart connected to a 500g propane tank.

When the power goes out:

2.) UPS start beeping and running off of battery

3.) 15 seconds later the Generator fires up

4.) Another 15 seconds later the smart grid disconnect and transfer switch turn over to the generator

6.) I can run like this for about 2 weeks (disregarding 30h service calls for the generator) until I need another fill on the tank. The lead time for a fill is about 4 days.

The UPS are most certainly the weakest link in the chain. I test them every 30 days for proper charge/drain, and I've had to replace about 20 batteries so far.  The CyberPower brand performs really well, provided I disconnect the power panic from the racks of MK3S+. The Prusa Mini, Ender 3, and CR-10 never give me any grief during the switch.

I got 99 problems, but power aint one.