English
Login
Forums
English forum
Original Prusa i3 MMU2 & MMU2S
General discussion, announcements and releases
Is the MMU2 "ready" and worth it?

Were you able to retain the existing original parts for the PTFE tube to use the 2mm/4mm diameters. If not which parts parts did you use? Thanks.

yes you can retain the connectors.  They are M6 connectors between the mmu and extruder I believe.  I recommend the M10 connector mod for the back side of the MMU.

Thanks! I already have to M10 connector mod printed (waiting for the tubing to arrive). Appreciate the reply!

Not everything I print is multi color but still I like the MMU. 5 different colors and/or materials ready to go.

But about the multi color thing. There are some set backs. Most things mentioned before. Mine are:

2) PTFE-tubes could be wider. Between filament rolls and buffer I use 3mm inside diameter tubings. Planning on 3x6 between buffer and MMU and even between MMU and extruder.

3) IR sensor on extruder is a pain in the ass to get right. Once it is good, don't touch it...... ever! I mean it! Also planning on making that one better

- The cutting thing. It works, it really does

- The loading and unloading. Usually it really works very well

- The spool joining feature. Spool nearly empty? Just place a spool in the next slot and activate the feature. The printer continues with the second spool when the first is empty. Worked like a charm.

I did some other modifications. The idler housing is replaced with one with smaller space between idler and housing so flexible filament doesn't get stuck so easily.

I'm successfully printing semi flex materials (TPU 98 / TPE 95) in multi colors, even though it isn't officially supported yet. Printing at max 20mm/s and even set feedrate to 50% which makes printingspeeds of 10mm/s effectifly. Nozzle 210C and auto fan on. Nearly no stringing when retracting filament for change to next filament, so no jams. (Again: the IR-sensor alignment is crucial here!). Not saying it's printing perfectly; some blobs on the print and some stringing but a little work after printing and it's a nice result.

I also printed TPU40 with success but not with the MMU. Just directly from the spool into the extruder.

When using materials with very different printing temperatures you do have to make sure you get the 'hotter' filament out properly. I once printed PETG after PC. The nozzle just went Gandalf 'You shall not pass!!'. Raise the temperature tot PC values, run some PETG through it, then lower the temperature to PETG values and you're good to go again. This also applies when printing TPU40. Insert the TPU40 very slowly, preferably after a somewhat 'lower temp' filament like PETG or PLA, not directly after PC.

I did (and still do) encounter difficulties but I'm very impressed by the MMU2s. No, it's not ready for anyone to use. It needs adjusting, refinement and tweaking. But hey, all of 3D printing still is. It isn't a laserjet which you put toner and paper in and let it work. ANY 3D printer requires knowledge about materials, ways to print (flat, standing, angled), temperatures, speeds, limits, compatibility, tuning, adjusting, preparation, supports, cooling, and so on. So, is 3D printer for everyone? No. The MMU2 isn't also, it's for the somewhat more tweaker amongst the 3D printing people.

In that point of view the MMU2 isn't really much less ready for the market than any 3D printer.

you're braver than I am for trying tpu with the mmu.   I can't imagine 600 tool changes with tpu.

As I said earlier added smd led on ir sensor is big help to set it right.

I think that should be added to next revision of this sensor.

you're braver than I am for trying tpu with the mmu.   I can't imagine 600 tool changes with tpu.

Last print with 3 colors TPU/TPE 98/95 and 86 tool changes with no problem (concidering the MMU2). Other problems like 1 layer not sticking, some blobs, some bleeding and some stringing are not the cause of the MMU2.

I'm doing the same thing again with just some changes to prevent the bleeding. The blobbing and stringing probably will occur again. The bleeding should be less and hopefully the layer thing was a one time problem.

Maybe I'll give it a try lol.  just for the hell of it lol.  would be cool if it works.

As I said earlier added smd led on ir sensor is big help to set it right.

I think that should be added to next revision of this sensor.

I do agree that the SMD-LED is a great thing. However, it's not a true solution. It's an aid for a problem (which should be implemented anyway, even with a proper solution!!). The movement of the 'arm' in and out the IR-sensor is way too little. An arm which is twice as long should solve the problem with ease. But a chimney twice as high as it is now doesn't seem a good idea to me so another solution is needed. I'm still thinking about it. The combination of the SMD and a more precise way of ajusting (I saw an arm which is ajustable with a small bolt) is way better but still not fool proof.

I would like to see (or find or think of) a solution which isn't picky on filament. I think a sensor like PINDA and FINDA would be a great thing. Use it to sense the wheel pressing on the actual pully or a bolt in the end of the arm (even better) should be way of a difference. The thread of the sensor makes it way easier to ajust and isn't affected by reflection of light. I wonder if such a sensor can be used directly for this problem.

Maybe I'll give it a try lol.  just for the hell of it lol.  would be cool if it works.

See attached picture. Worth it to try a little harder 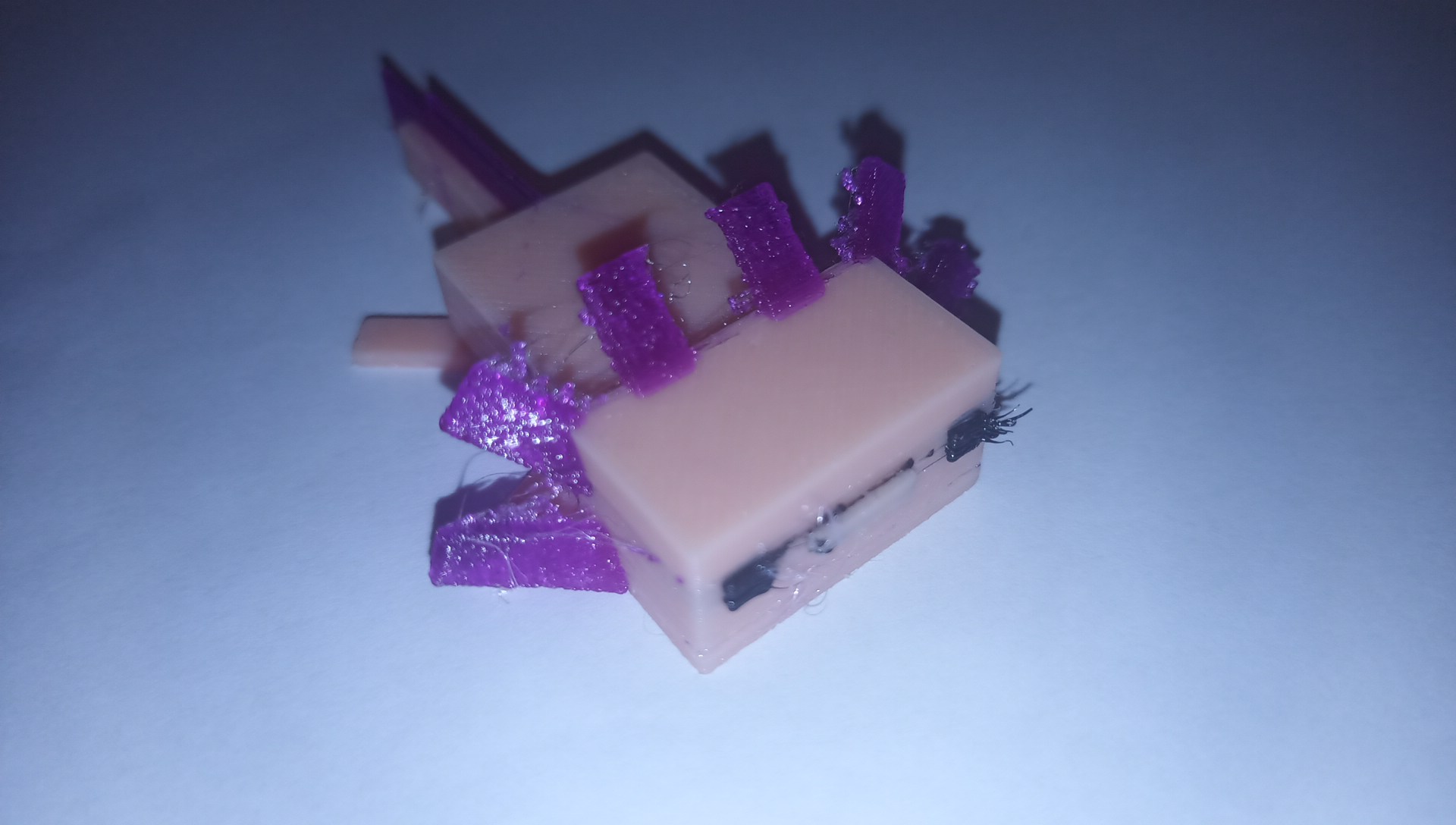 I've got 3 colors of ninajaflex I can see if I can get a simple 3 color  print going with it.  My mmu is tied up print the huey for another 30 hours or so.  Might try after that.

210 degrees nozzle (crucial for less stringing; 220 got too much stringing when retracting to change filament, 200 didn't work neither)

Auto cooling (small things got way too hot and melted; the well known Marvin got a shiny top of his head, the loop was just a blob but with cooling on and temperature at 210 the loop is just fine)

it's 85a.  it definitely requires slow print speed.  The semiflex settings work for it.

Just wanted to close the loop on this.  I just dropped it in some water to dissolve the supports.   I had to intervene only one time in 560 tool changes.   Assuming everything comes out ok I'll print the two rotors.

Just curious, is there a reason you're using dissolvable material all the way up instead of just the interface layers ?

Having problems with bed adhesion every morning...

yes, I was doing interface layers but the supports around the skids problematic and the parts on this thing are fragile.

I even had one casualty regardless. 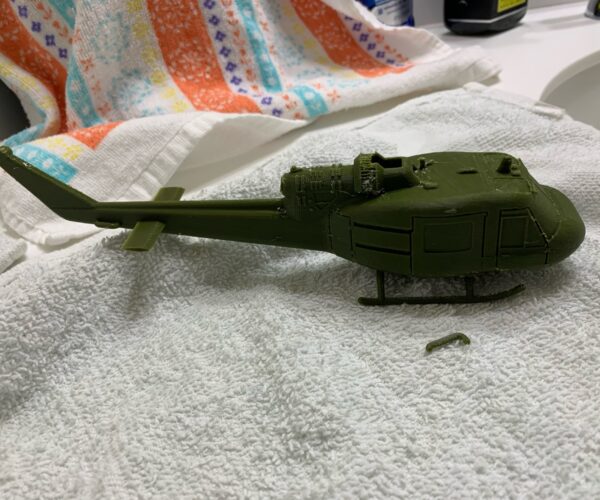 This is my second full print of this lol  I don't plan to ever print it again.  Currently printing the rotors and then I'm going to superglue that top bar back on.  This is a gift for my father-in-law lol

So what is your experience?  Worth it or not?

I’d say no.  It’s too finicky to depend on.  It’s certainly not as reliable as the printer itself

I will also add that the prusa could do better here with communicating with it's users.   There are numerous outstanding issues against the mmu firmware project on github yet it hasn't be committed to in 2 years.  Causing some to ask if it's abandoned.

However Prusa himself in issue #22 of the prusa live youtube show alluded to a new version of the mmu2 firmware coming soon.  How can it be coming soon if there's been no updates to the repo in 2 years?   Unless they've been doing the development elsewhere....  but they could have kept us informed.

The entire design is really flawed and can't be counted on to cover filaments they've not specifically tested because the tips of the filament have to be maintained perfectly.  I have a 100 dollar spool of Aquasys 120 soluble support filament that I can't use because it blobs up when being retracted from the extruder.  I can print an xyz calibration cube perfectly in it however.  But for it's actual purpose to be used as a dissolvable support, not a chance without spending some inordinate amount of time trying to figure out what settings might be right to get the tips to be shaped correction when retracted from the extruder.  It's pretty temperamental to be quite honest.  you could have it work fine  2 or 3 times out of 5 and then under the same apparent conditions you have to intervene every other filament change.

I would never ever count on it to be reliable at this point.  Thankfully I don't count the mmu to make money.  All my prints are for myself or gifts for people.  If I had to rely on this thing to make money, I'd have chucked it long ago and gone with a something else.  In the end the only real solution in my opinion that's not a hack is multiple extruders.  The Palette seems like a better idea of getting multiple filaments out of a single extruder, but you're still beholden to whether the materials will splice together.

I'm probably going to save up and get a third printer that's multi extruder for real multi material prints.   I'll deal with the mmu in the mean time.