English
Login
Forums
English forum
Original Prusa i3 MMU2 & MMU2S
General discussion, announcements and releases
Is the MMU2 "ready" and worth it?

Self rewinding spools seems to be a way to go.

We have printed test sample of this one and it works fine.

I still contend, not withstanding the comments above, the MMU2 is just not ready for sale.  At best it is a 'Beta Test' worthy implementation that still needs considerable work to make is ready for release.

But I guess it is just cheaper and easier to push it out early and let the 'mugs' that buy it do all the necessary rework and suffer the consquences.

I might have some more test results in a day or two.  Got work stuff to do.  I have a 52 hour print of a huey I want to do and now I have two of these spool holders made so that should be a good test, ~660 tool changes lol

Alright I have two of the previously mentioned spool holders printed and now I just started the huey printing again. 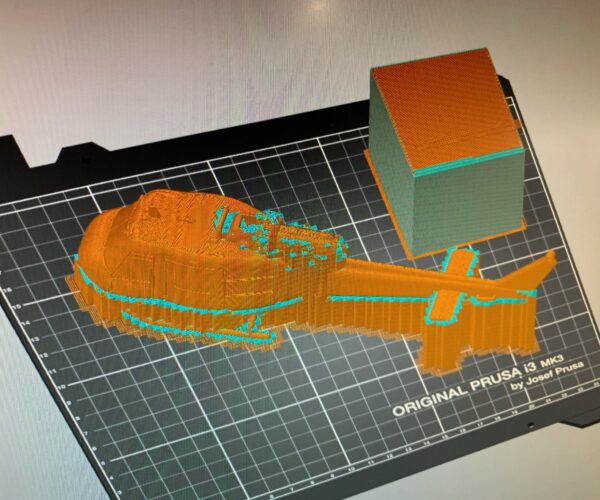 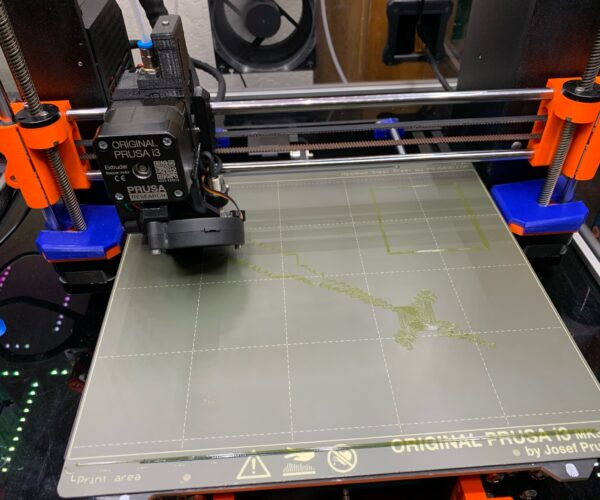 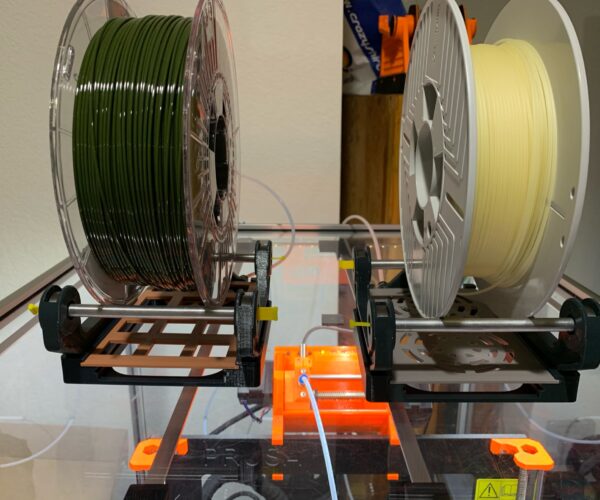 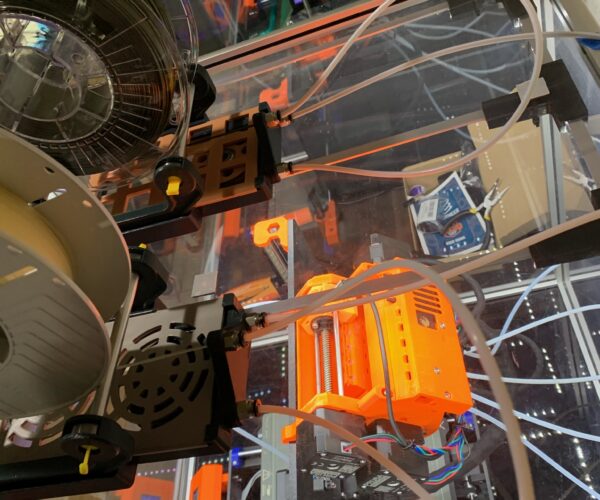 Lots of complaints yet searching the Issues section on GitHub doesn't seem to have any reports about these issues?!

Prusa don't read these forums or search the net for complaints, people need to report them on the Official GitHub  site.

For the MMU2 the page is here: https://github.com/prusa3d/Original-Prusa-i3/issues

Make sure to include MMU2 in the title of the report you file.

No report, no fix.

alas on the third tool change it failed and became unrecoverable.  Back to the drawing board.

What support material is that? PVA gives me more trouble than what its worth. Good support settings and PLA on PLA is better imo. Please note that prusa only recommends a select few water soluble materials, this is because the diameter of most PVA is bad.

I have no idea why you guys can't make it work. I have been running the MMU2S and the MK3s+ ever since I assembled them in that order two months ago, it has run for days on end with little trouble...

soluble filaments are tricky to get working reliably because of their bad quality - it also sucks moisture and expands when left out. That said I have managed to use PrimaSelect PVA+ without any problems, same goes for Flexfill TPU, though that does have a tendency of causing a little trouble when unloading.

This is with stock parts, stock buffer and good quality filament I didn't change anything although it did take me a few hours of fine tuning the machine and learning the blinkenlights.

Honestly, if you are not interrested in the MMU because you have to learn how it works in order to use it, get the Palette or a commercial dual extruder printer.

I have also had things working before.  I've not used the stock buffer.  The thing that has worked for me is the gravity rewinder spool, but that can in many cases pull the filament back too far on eject causing you to have to intervene the next time the printer goes to grab that filament.  I had the most success with that configuration.

Combinations I have printed with successfully:

In the quest to try to reduce eliminate interventions I think I added drag/friction to the whole thing.

I know it CAN work but the fact that it's so hit or miss is what's annoying.

I'm definitely considering the paletteV3 Pro.  Given how the mechanics of how the MMU works I wouldn't waste a single minute trying to get TPU working with it.  There are simply too many places things can go wrong with it.

I'm going to take the MMU enabled printer out of the enclosure and runs some tests where the possible sources of drag are eliminated.

I'm exceedingly patient.   More patient than most folks on here I would imagine.   But I think prusa has not handled the mmu well marketing-wise.

so I tried a simple print this morning.

2 cylinders, one color each.

Prusament PETG for both colors.

It made it through one tool change.   It then hung up with all leds blinking orange and green.  The manual says this is a power issue.  So this afternoon I'll check connections.  it would explain why it was working relatively ok and then started being completely useless.

I think I recall seeing a post by an electrical engineer on here stating that the board design for the MMU had a design flaw where it didn't supply enough power and by plugging in usb to the mmu it would supply enough power.   I wonder if this is related.  I'll check my connections first.

Does water soluble support make the overhang completely smooth and clean or just makes the overhang looks better than without using it? Can somebody share some photos?

it will make it reasonably smooth.  you need to take care when printing soluble supports to purge enough material on filament change so that you won't have some soluble material mixed into your model during print.  This will leave the model less strong and probably not as smooth when you drop the model in water aterwards.

I assume prusa had good reason to have the filament enter the way it did.  If you have five spools it's going to take up a good deal of room. There are third-party brackets that will allow you to attached the mmu in a horizonal fashion on the frame.  that doesn't help if you have the whole thing in an enclosure though.

So case in point.  I had the mmu sort of working and now it's not working at all.  I'm about to contact prusa about it.  Very close to unhooking the thing and turning it back into an mk3s+.

It will not pass this simple test:

The first filament loads and prints the first layer of the first cylinder.

The second filament loads and it acts as if everything is good and starts to move the print head as if it's printing, but nothing is coming out of nozzle.  It acts like a clog, however when you stop the print and pull filament 2, it looks as if it never made it into the hot end.  I have repeated this test numerous times, switching the filament in case it was the filament itself.  It's always the second filament loaded.

Only two spools hooked up.  and no fancy buffer mechanism, just feeing straight into the printer via the PTFE tubes. 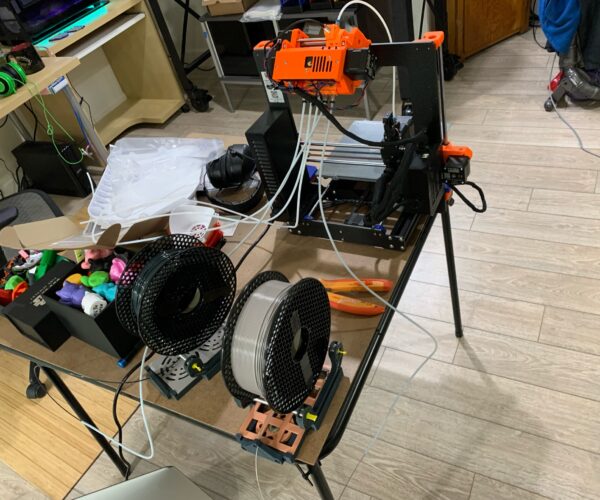 One cylinder, regardless of which color I put in as filament 1 always prints. 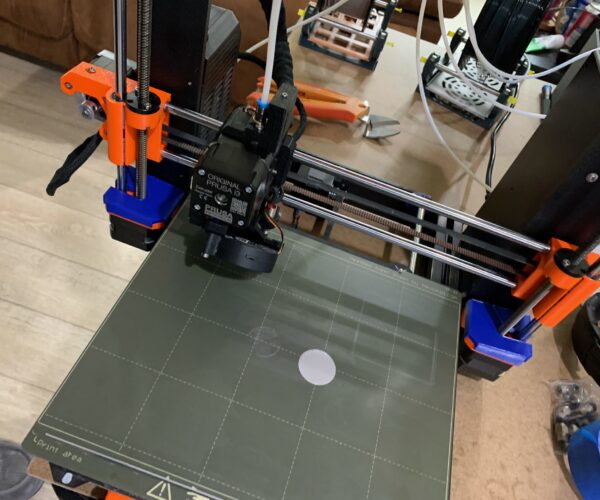 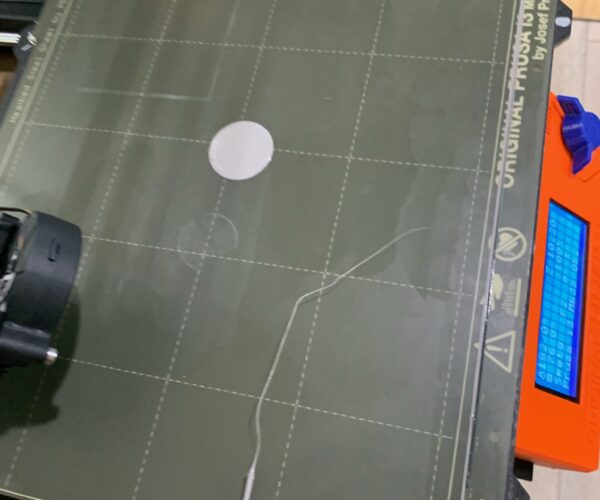 And filament 2 is always loaded and the print head starts moving again but nothing comes out.  When you stop the print it looks like below. 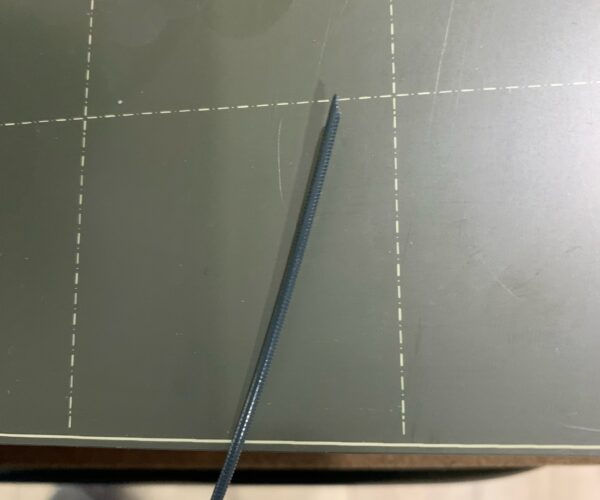 And here's the very simple test print I'm trying to do.  I'm not using a purge tower, I was just printing this is a test so it was fine to have the first color bleed into the second cylinder. 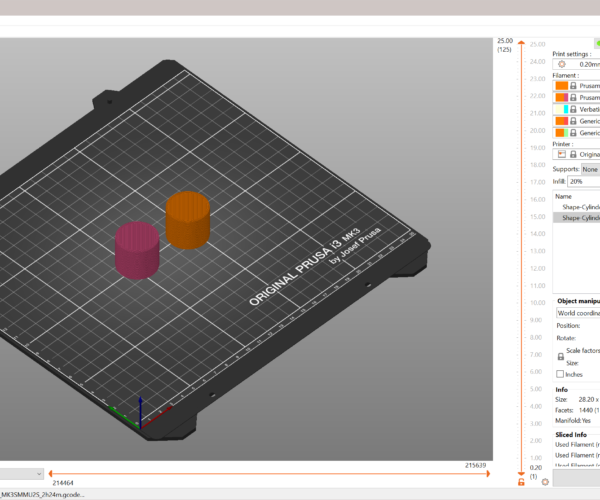 This thing has worked for me before and the printer works fine in single mode.  For whatever reason it just stopped working for multi material prints.  I'm going to send the above info to prusa and see if they have any ideas.  This unit is not more than 6 weeks installed.

Today I have opened the mmu and made sure there are no obstructions.  I checked and tightened the power connectors because yesterday in trying to do this same test I got the 5 blinking orange and green leds.  I opened the extruder and checked the ptfe tubs and gears for any issues.

So it appears to working again.   It turns out my test with two cylinders was causing issues.  Given how the MMU is designed a wipe tower is 100% required to work.   Without the wipe tower it doesn't shape the tips and leaves a long string on the first filament when it's retracted.  in my case it 100% of the time interfered with the second filament(on the very first filament change)  being extruded.  Since they were just a test, I didn't really care about the first filament being bled into the the second one.

I have been working back and forth with prusa for the last two days.  Standard stuff, opening up the extruder and looking for damage, etc.

I'm still  convinced the the over all design of the mmu is still flawed and very dependent on the filaments involved.   But at least I gained some insight.

I had a successful 125 tool change print of my test print with two cylinders.   Not changing anything I'm going to attempt the huey again. 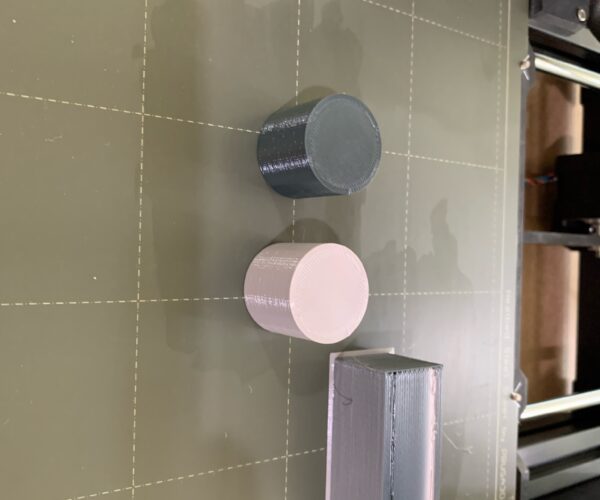 Anyone in the UK looking to sell their MMU2S let me know, Id be interested in buying it.  Happy with mine now so after another for my other MK3s

For anyone interested, I think things are working.  Yesterday I started this PETG + BVOH huey print that I've been trying to get working.   But with the success of my test cylinder print that had 125 tool changes, I figured I'd try it.   It's been going since mid day yesterday and is still going without a single intervention. 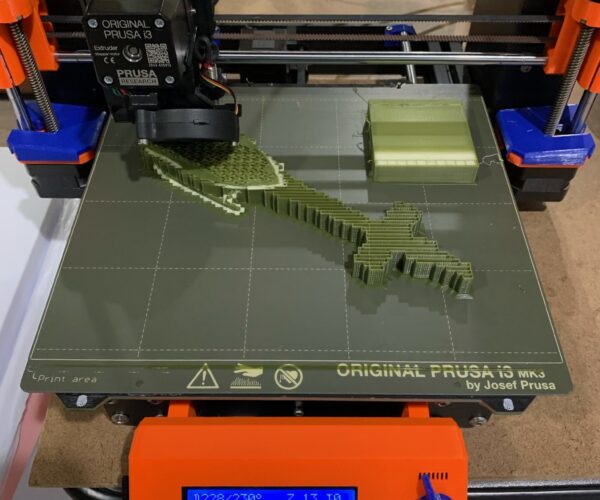 What it looked like to me was that this isn't an easy system to setup. Not Like the MK3s that has been flawless since I got it.

But I did buy an MMU and printed the modified selector.  I wanted to have that magnet to help the filament sensor right away. Other fixes will be made when I see the need.

I took my time building it and make sure all parts are clean and fitted well to have the filament run through as smooth as possible.

That seems to have worked. I downloaded the multi material Bender bust and sliced it. There is should have taken a little more time to figure things out. Messed up the eyes.

During the print the first filament change didn't happen at all. That was my fault (should have taken more time) I use Octoprint and Octoprint didn't send the toolchange command because the selected printer didn't support that. Luckily I could change the settings in Octoprint during printing and during the next layer the filament change happened without problems.

The print finished just fine and did 125 filament changes.

Next will be to make my own filament buffer to attach to the same rail that I use to hang my filament holders.

And figuring out how everything works and what I can tweak on the lcd and in PrusaSlicer.

I thing the MMU is "ready" but it isn't was easy / foolproof as the MK3s. I think I knew that it will be difficult and that is how I look at it. If you expect it to work  as easy as the MK3s you will be disappointed. 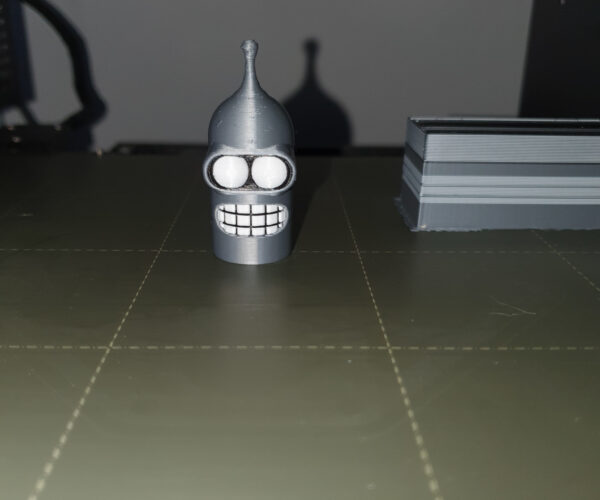 This article discusses replacement of the 5 input PTFE tubes with larger versions and provides links to the printed parts. My question is what about the single PTFE tube from the MMU selector to the extruder? Does it also need to be increased and is there a mod available, or should it remain as is?

I have replaced all my tubes.  Be careful with the one between the mmu and the bowden.  If you don't cut it the same length of the stock one you might have to run a calibration on each of the filament paths of the mmu.  I decided I didn't want to do this.  I believe it was roughly 14.25in long.

I don't recall but I believe one of the moderators on here, joan, said the stock prusa ones are in fact 1.88mm ID and not 2.   I replaced all my tubes with 2mm ID and 4mm OD.  This definitely yields better results than the stock ones.  I know some have gone as far as doing 3mm ID.  I think this is fine for rigid filament like PLA, PETG etc.  I would imagine that it could cause problems for TPU since it gives the the filament more room to deviate should it get any back-pressure.  Since TPU is not officially supported in MMU I don't even try it.