Figured out why my prints worked better with Simplify3d. I was not using the latest version of Slic3r MK3. If your prints are stopping after the purge strip, updating to the latest Slic3r should correct it. The custom gcode was set for a MM printer. Didn't think to update Slic3r when I did everything else.

Latest print is going strong. Everything is on. Printing another simplify3D file. Printing PETG at 133% speed. 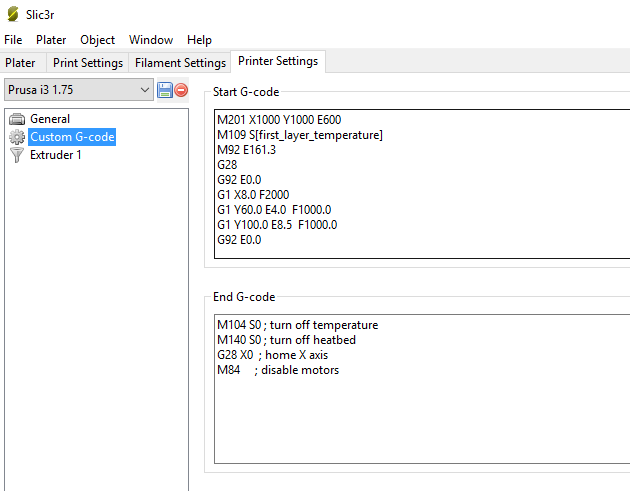 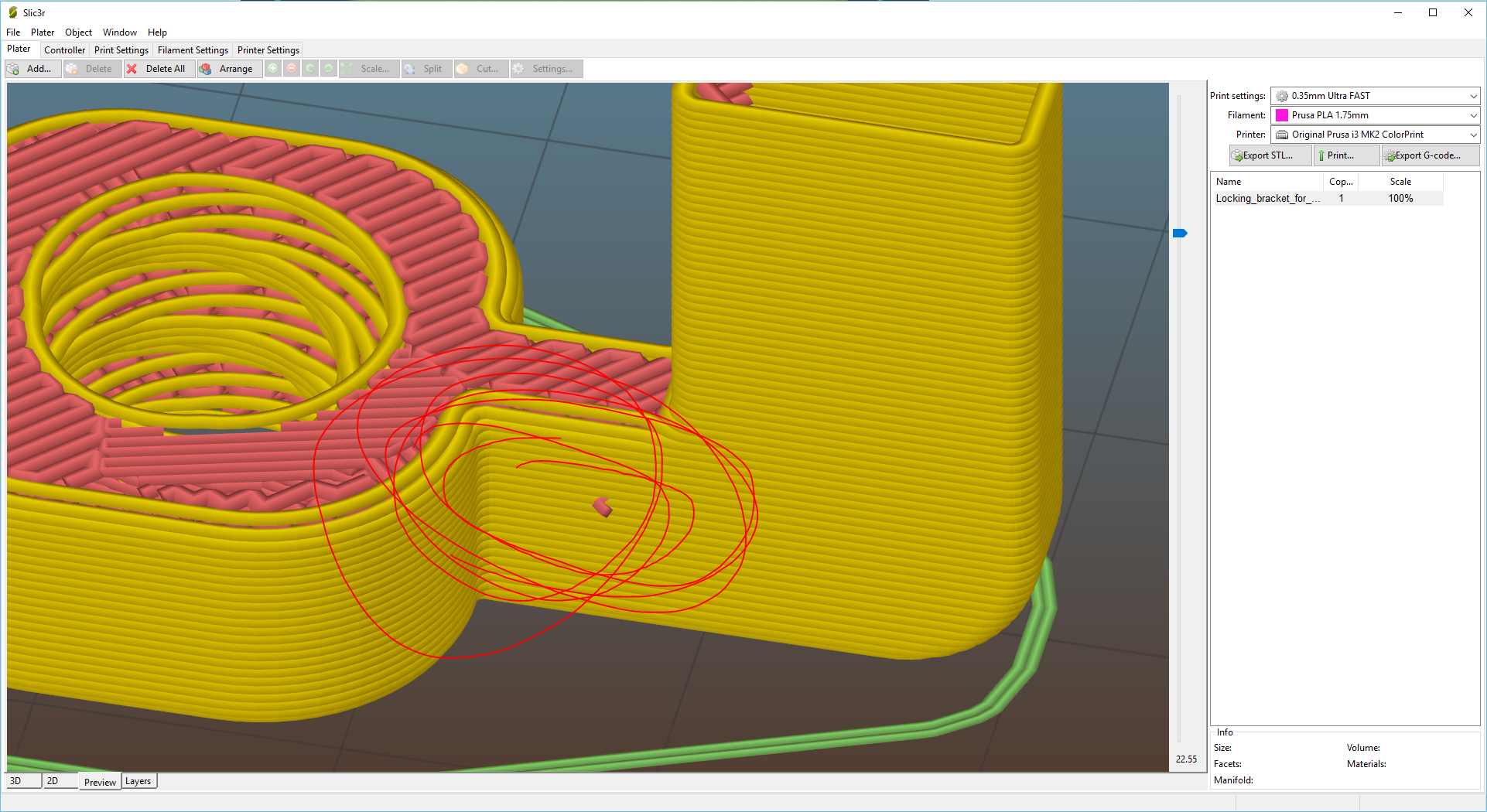 That is the offending bit of code that has been keeping my OctoPrint from working properly. I have been trying to update my Slic3r PE version as I am on version 1.37.2 for Win64, but my internet connection has been utter crap for the last 3 days. After changing that mess to just "M900 K30" OctoPrint is working without issue. there is still the occasional checksum error flying by in the terminal screen, but the print seems to be continuing with no issues.

That is the offending bit of code that has been keeping my OctoPrint from working properly. I have been trying to update my Slic3r PE version as I am on version 1.37.2 for Win64, but my internet connection has been utter crap for the last 3 days. After changing that mess to just "M900 K30" OctoPrint is working without issue. there is still the occasional checksum error flying by in the terminal screen, but the print seems to be continuing with no issues.

Great to hear that you got it working. Sorry for the internet issue, i know the feeling. 😡

Same here with the errors. It's like it misses a packet here and there and has to resend it. My prints are completing though. I had one weird movement, where the Z axis went all the way to the top but then it went right back to printing and finished.

I do wish that after the print was done the printer head would park itself at aleaset 1/2 to the top of z-axis. One issue I ran into on prints that a very low (under 1 cm) its hard to remove the megnatic bed with out corn jamming against extruder assembly.

I finally managed to download the latest driver package, Slic3r no longer puts that long string into the gcode files, I ran a print from OctoPrint over night and it completed with only a few minor issues. Randomly the X or Y axis would home in the middle of the print, causing a loop of plastic to adhere to the outside of the object. Otherwise it was perfect.

Ok, i'm starting to wonder if this octoprint is really that unreliable or what? First of all i have to wait ages to start at all (ok, that might be slow SD card...), then it fails to start every ... say, 5 to 10 power-up cycles. It's stuck at website "octoprint server is not running...". Then i have to restart printer, usually several times and if i'm lucky i manage to get up'n'running.
And it doesn't help if i shut down octoprint via web with "shutdown" click...

My set up currently that is causing crashes, midprint stop and drops (head stops and the extruder starts dumping filament), and shifting

RPi Zero W via Expansion Port
Firmware is 3.1.1 RC4
Crash detect is off
Fil sensor is off
Running 1.3.6 on Octoprint
Nothing plugged into the Pi Zero as far as cams or usb.

The second serial port (where the pi zero connects via headers) is completely unreliable at the current time. The output from the Einsy to the Pi seems fine, but the input sent from the Pi to the Einsy suffers from dropped bytes.

Gcode sent by Octoprint includes a checksum that the interpreter verifies before it exits. If you watch the console you will see the firmware asking for retransmits all the time. Occasionally however, the input will be received incorrectly and the checksum will still pass verification. Although the chance of this happening is only 1/256 when you have a gcode file with thousands of lines and a very high error rate (some lines are retransmitted many times) it quickly adds up. In testing, I have had head the hotend crash into the parts, crash to the end of the axis, and extrude big blobs requiring reset. At least it has not crashed into the bed but I attribute this to the very small number of moves that include -Z instructions.

Anyway until these problems with the internal serial port are resolved, using OctoPrint from the internal serial is essentially not possible. I am puzzled by those who claim to have success. From the commits on the prusa-firmware github it appears they are attempting to debug the issue.

For the record, I have the Einsy with the LCD daughterboard. I do not really think that the changes made between that rev and the second rev should affect the 2nd serial hardware, but perhaps there is a related issue with voltage levels on that header?

I work with AVR controllers at home for a hobby quite a while and from my experience using more than one UART was always a problem sooner or later. I thought that it's my lack of knowledge's fault, but more and more it seems that good, but old mega2560 just can't cope anymore. In fact, that was my only MK3 dissapointment so far: i really, really expected that MK3 will use ARM. Controllers for 3D printer with ARM are around quite a while. Sure, it would cost a bit more. But, to be honest, guys, who wouldn't pay a few bucks more for more modern and quicker controller...?

From the commit history it did look like they were trying to have simultaneous control from both serial ports but at least right now it's one or the other. When you enable the second UART the usb connection cannot be used. The Einsy redesign was already an ambitious rework; I can see why they may not have wanted to also involve the switch to a 32bit micro, but they already got caught on SD card voltage issues; i would not be surpried to see the same sort of hardware issue with voltage levels present in the Rpi interface.

I wonder about the current requirments my self to power Ri zero not to mention Pi3. One other thing i was thinking. the ticking noise from the power supply. Is that cause an interference on the serial bus. Also I'm very surprised that the firmware does not let you select different baurates.

Do I need to download the "mount" for the Pi Zero?

I have the Github link:

But I can't for the life of me work out how to download it.. But it also seems to be quite hard to print and may need supports and I wonder if my old Printrbot is up to the job...

Does this part come with the MK3? Or do I need to print it? and if the latter, could someone help me understand how to download the STL?

Click the button labeled "Raw", if it opens in your browser, just press Ctrl-S to save the file.

Cheers.. That worked.. Printed it on my Printrbot with Supports and its a perfect fit.. Many thanks.

RPi Zero W via Expansion Port
Firmware is 3.1.1 RC4
Crash detect is off
Fil sensor is on
Running 1.3.6 on Octoprint
Slic Version 2.1.3

Printing from the MicroSD directly not thru octoprint but the RPzero is installed and booted.

I was print a piggy bank body. I look like i was printing great but once i finished i noticed strange under extrusions on a side that was not visible during the print. The top side never show any signs of under extrusion. Now the strange thing both bug/???? shared. This print stop for no reason about 75% done, it was printing over night. It continued to heat the extruder wich resulted the filament turning into black tar. No error message on the LCD screen just the usally info. I remove the blob and just for fun pressed the knob. It started printing like nothing happened. I did leave a visible discoloration from over cooking the filament. I did stop one more time later same way. Now i did another simple Rpi R3 case. same thing it stop 2 or 3 layers and melted into the print . I'm going to attach images and gcode for both models. Looks like I can't attach gcode directly any ideas how i can share the gcode. 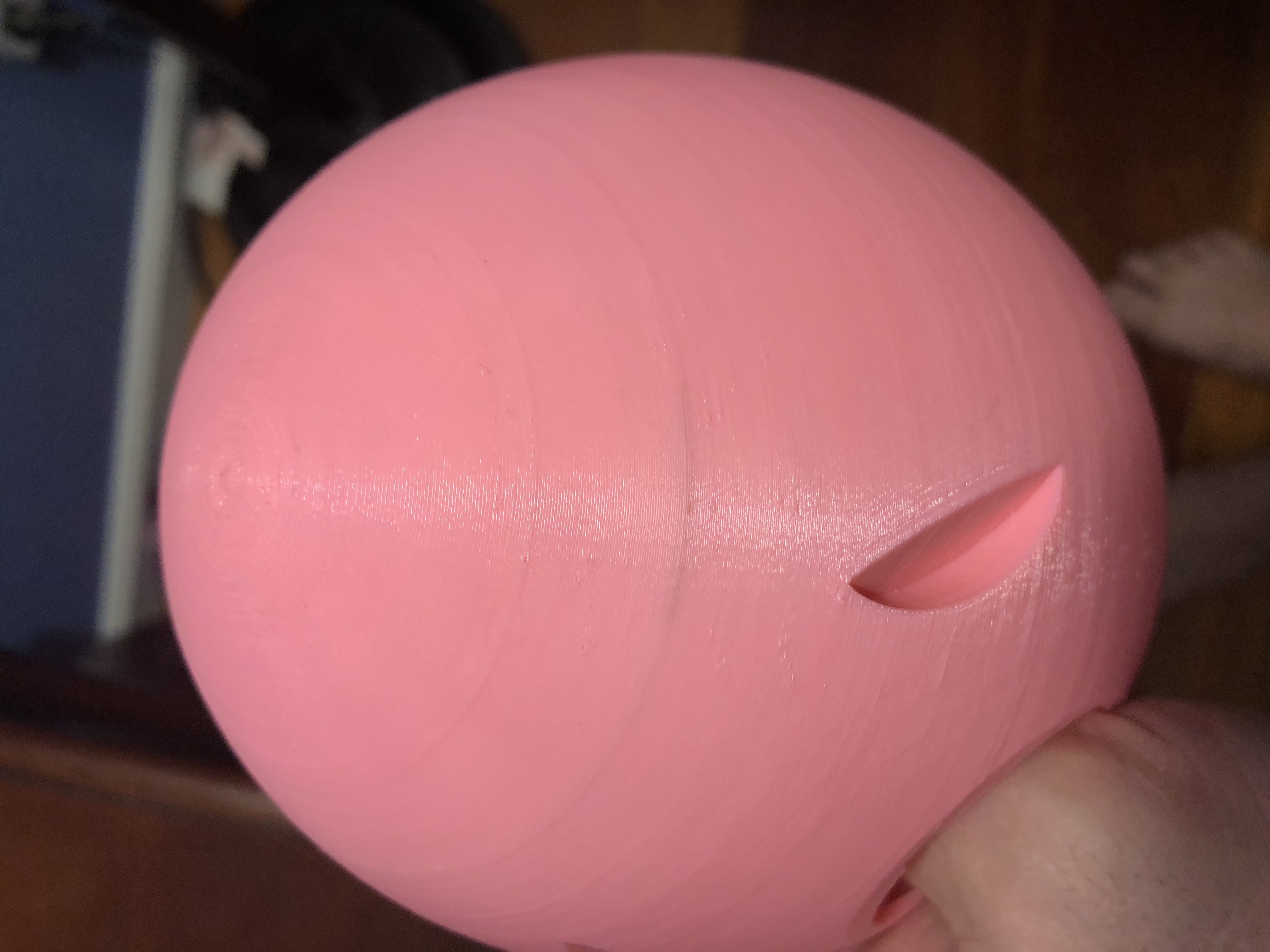 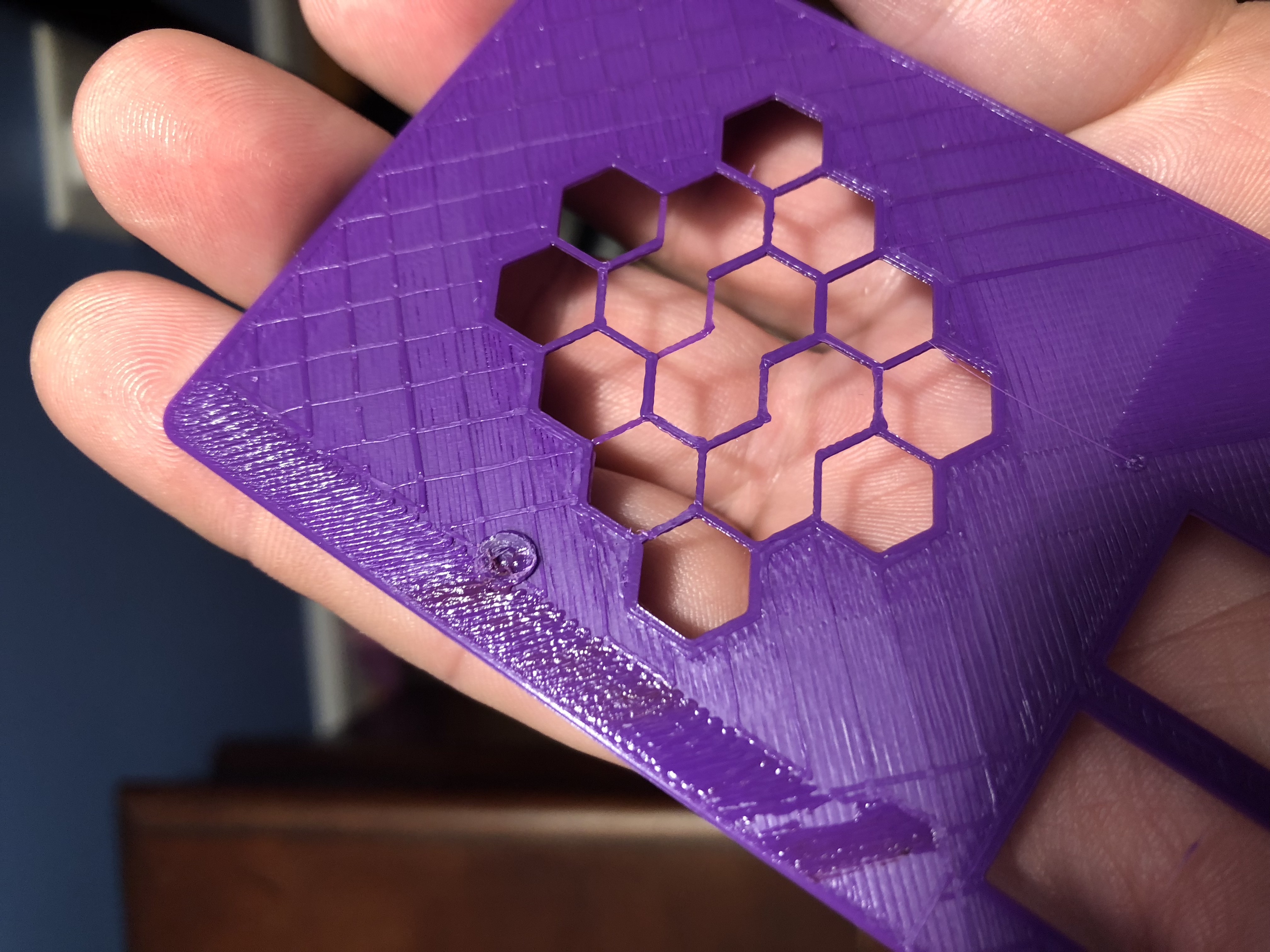 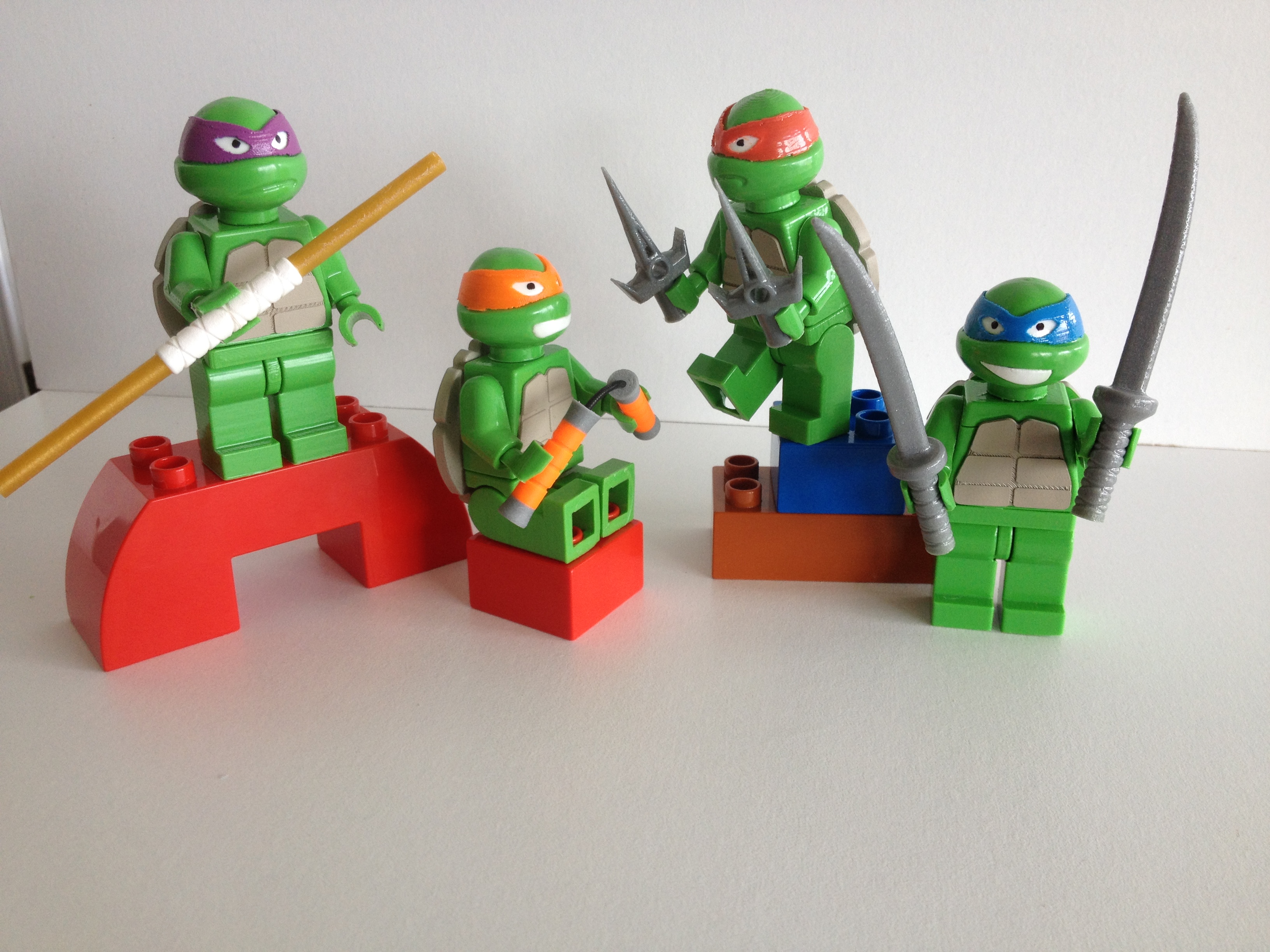 What is the CORRECT method for pin connecting the Pi Zero board to the rear of the Einsy controller?

Pictures or link please if there is an approved method yet.

The hardware side of the RPi Zero connection is covered in the newest version of the Handbook, page 37: https://www.prusa3d.com/downloads/manual/prusa3d_manual_mk3_en.pdf?4

Which is also outlined in this thread:
https://shop.prusa3d.com/forum/original-prusa-i3-mk3-f30/pin-header-for-pi-zero-w-install-t12363.html

Has anyone physically confirmed the supposed "high CPU usage due to the wifi driver" on the raspberry pi zero W while using octoprint?

And is it causing any issues?