Been watching this product coming up for sale soon. Does anyone know about using it on a Mk3 S+? It says it's a direct fit on a Mk2 or Mk3 but no word on it for the S+. Really like the way the nozzle change works!

It's a drop in replacement on the Mk3S+

Thanks for the information folks. In my location it can be hard to pull searches as I never know how long my internet signal or power is going to last! Right now it's good. In 10 minutes who knows? The joys and travails of setting up a 3D printing operation in a remote third world location. Hoping these might be a bit more trouble free removing the risk of a problem during a nozzle change. It can take weeks to months to get parts down the long supply line to us here. I notice Prusa isn't listing spare E3D's right now either or it's my wonky signal here. Wanted a few spare hot ends on hand. Might just wait and get the new Revos. Very shortly we will be two Prusas and a Raise 3D. Trying to keep things as dependable and straight forward as possible. May you all have a great new year!

I wanted to try the new E3D Revo Six in my Prusa MK3S so I could experiment with different size nozzles.  I used the original brass 0.4 nozzle for two years because I was worried that if I changed the nozzle, I would inevitably break the heater and/or the thermistor wires.  The most often given reason to not yet buy a Revo is the lack of other-than-brass nozzles.  I have only used a brass nozzle so far, so this was not an issue for me!

My 24V Revo Six was delivered Feb 19.  The E3D guide, “Revo Six Prusa (MK3/S/+) upgrade guide”, says the Revo Six is suitable for an original Prusa MK3, MK3S, and MK3S+.  And the E3D YouTube marketing video has the Revo installing itself on the MK3/S/+.  The Revo is close to drop-in perfect, but there are so far three issues I found that may need attention for those wanting to use Revo in their MK3.  The issues are the heat sink, the part fan duct and the end G-code.

The V6 heat sink bottom disk is round and sits in the MK3S extrusion body such the no light is visible when looking through the heat sink fan opening towards the bottom of the extruder body.  The Revo Six has a notch cut out of the bottom two disks.  You can see the difference in the side-by-side picture of the V6 and Revo Six heat sinks. 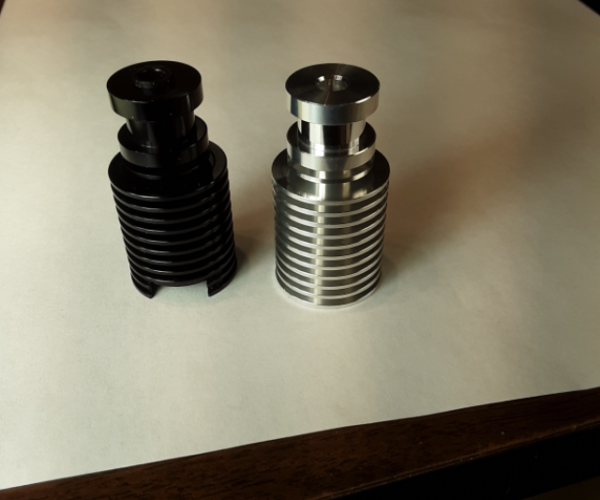 When the Revo heat sink is captured in the MK3S+ extruder, light can shine through the cut out at the bottom.  If light can shine through, I thought some air from the heat sink fan could blow out the gap and on to the print.  This may not be an issue for PLA, but could be for PTEG and ABS.  I am probably over thinking this, but I added a tab to the extruder body which fills the gap in the heat sink.  A picture of the extruder body before and after is below as well as the Revo heat sink sitting in my modified extruder body. 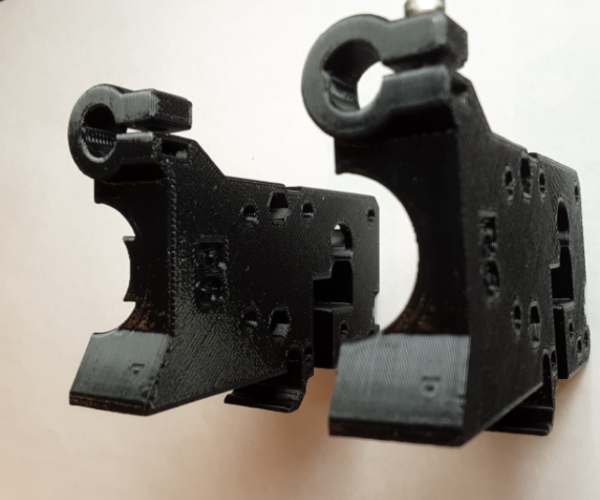 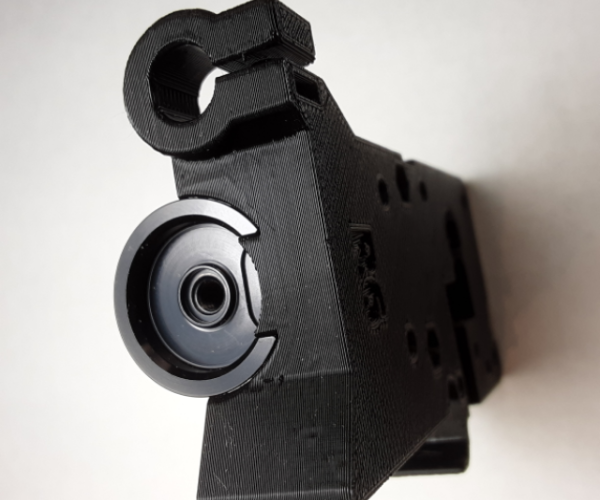 The next issue is that in order to take advantage of the Revo Six tool-less nozzle change, you need to be able to reach the nozzle.  In YouTube videos of the Revo on a MK3S, the part fan shroud was very close, and it appeared that the presenters took the shroud off.  I have been using an alternate part cooling duct for a couple of months and wanted to call attention to it for any adapters of the Revo Six.  The link is https://www.prusaprinters.org/prints/62523-delta-p-fan-duct-v2-r2-for-mk3s-extruder.   I included a couple of pictures to show how accessible the Revo nozzle is with that duct. 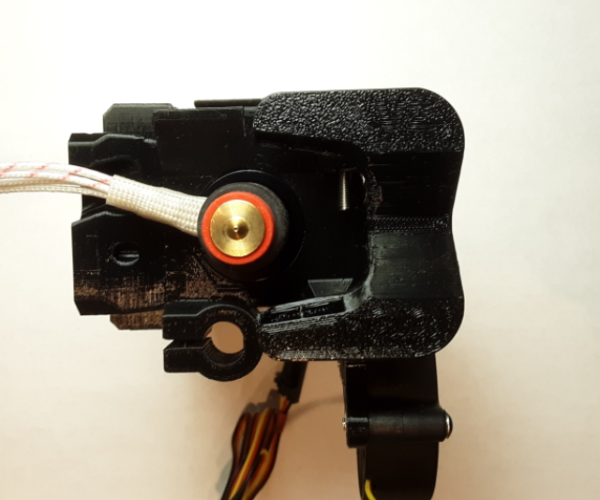 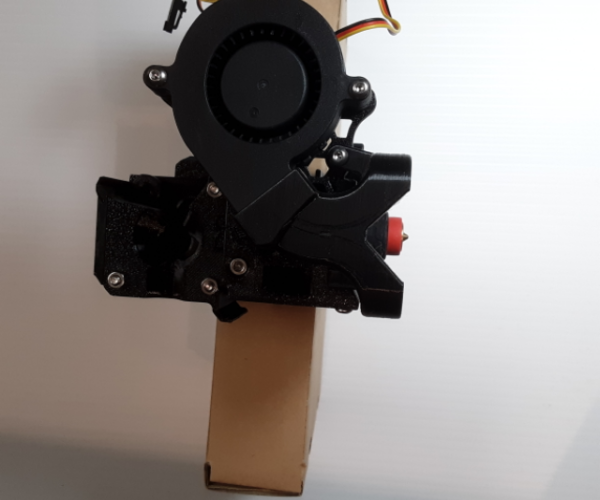 The last issue to consider is that you cannot unscrew the Revo nozzle if there is hardened filament from the last print in the one-piece heat break and nozzle.  So, I learned some new G-code and added the following to the End Code in Prusa Slicer Printer Settings:

Now I can switch to another Revo nozzle size without heating up the hot end to unload filament and then waiting for the nozzle to cool down to unscrew it.

No one can know the future, but my guess is that if the Revo Six demand remains high after a year or so and nozzles other than brass are available for abrasive filaments, then Prusa will design its own heat sink for the Revo Six just as the Voron Design team did.  I am waiting for my MK3S+ upgrade kit to arrive from Prusa before installing the Revo in my Prusa.  I cannot wait to use the Revo and try different size nozzles.

your comments are very helpful

I bought one them.  I could not resist.

The Revo6 arrived on Thursday and I quickly installed it with a standard R6 extruder, replacing a Mosquito along with its modified extruder.

The first several prints are promising!   The Revo printed out an extremely nice PETG Benchy, as good as Mosquito Benchies which were already extremely good.   I then printed out a few dozen small TPU parts and a couple of ASA parts, all of which I have been printing for the last couple of weeks.   The TPU parts seem considerably improved, the ASA ones slightly improved which matters as those have tight-tolerance internal and external fine-pitched threads.

Filament unloading seems better than the Mosquito when using the 0.4mm nozzle and slightly worse when using the 0.25mm nozzle.  This matters on my ASA parts which have a 2-color 1st layer with a few filament swaps needed.

The finger-tightening of the nozzle presents no problems with the latest Mk3+ fan duct.  It does take a little getting used to and is somewhat slower than changing a Mosquito nozzle but no little torque wrench is needed. It is many orders of magnitude better than changing a v6 nozzle.

The Revo is considerably weaker than the sturdy Mosquito, so if you tend to have head strikes you can expect to bend the Revo.  However, only the NozzleBreak is likely to bend so it's a very rapid fix.

But none of these things really make the switch from Mosquito worthwhile.  What does, however, is the new integrated Heater/thermistor core.  Not only the wiring is tidier and much stronger with a proper strain relief, but the heater itself is self-limiting in temperature.  This is critically important for long, partially unattended prints because even with all of Prusa's great safety features, none of them matter if the control transistor / mosfet fails shorted, as they tend to do.   A standard 6mm x 20mm 40w heater can get hot enough to melt an aluminum heater block and ignite filament, while the Revo Core is especially designed to minimize that risk.   The only question I have is how long the Revo heater will last.  I tend to go through one or two Genuine E3D or Slice Engineering heaters a year, and sometimes a thermistor too.  It will be interesting to see how the Revo holds up.

Would 275/280 suffice on a MK3S+? About to print something using prusament PC filament. Been stable so far on octopi with PETG.

Yes, of course.
Here is a graph of printing at 273°C with the standard E3D V6 Hotend, but with copper heater block and Titanium heatbreak. Latest Firmware 3.10.1 installed and PID Tuning done at 270 °C.

I am curious if the Revo in a standard Mk3S has less temperature fluctuations.

As you can see in the grapg, the nozzletemp swings around between 269 and 277. I think this could be improved... 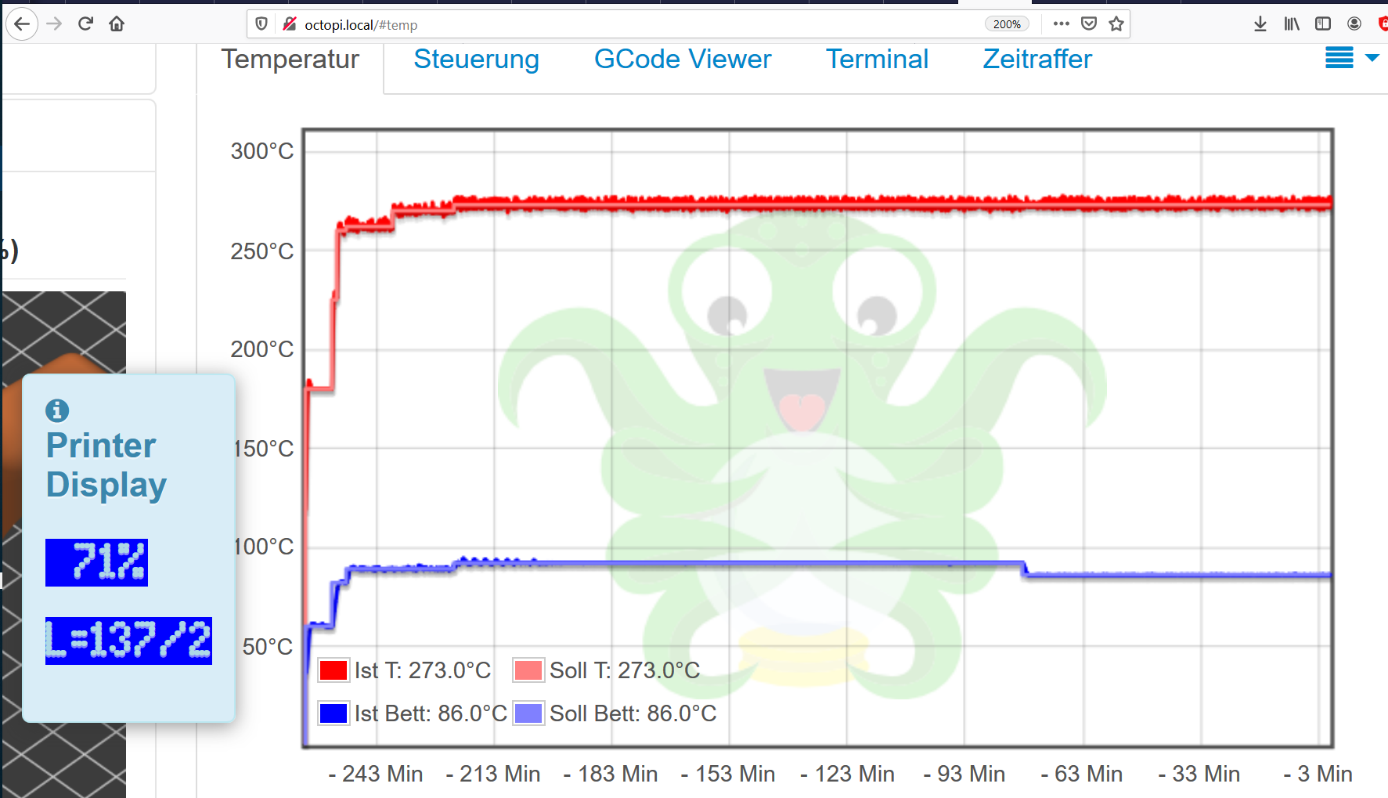 I usually use Prusament PETG so my PID turning was done at 250°C. However to match temperature I used Prusament PC Carbon Fiber on my MK3S+ with firmware 3.10.1-4697. Here’s the graph using the new Revo nozzle... 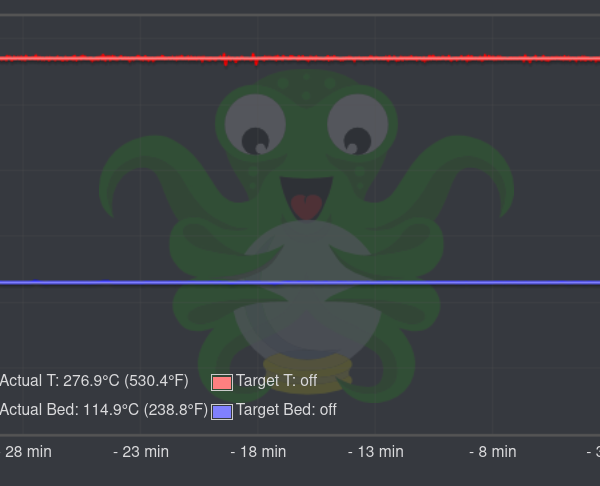 Generally it fluctuated ~3 degrees. Occasionally it peaked with 4/5 degree difference as shown with the two spikes.

Ignore end dip, print finished so was cooling off.

Thank you! On your graph one can hardly differentiate between target and actual nozzle temperature! 😀

This confirms me that i have to order one.

For me they worked better. I mentioned some benefits of the new wires here  https://forum.prusa3d.com/forum/english-forum-general-discussion-announcements-and-releases/new-e3d-revo-hot-end/paged/4/#post-587245 which also has a pic of the connector behind the extruder. So the new wire setup is... hotend <-> connector <-> wire <-> circuit board. If you need to replace the hotend don't have to rewire everything. 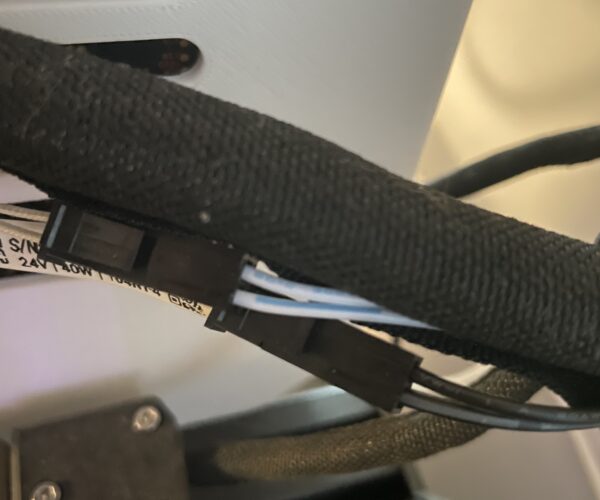 For me they worked better. I mentioned some benefits of the new wires here  https://forum.prusa3d.com/forum/english-forum-general-discussion-announcements-and-releases/new-e3d-revo-hot-end/paged/4/#post-587245 which also has a pic of the connector behind the extruder. So the new wire setup is... hotend <-> connector <-> wire <-> circuit board. If you need to replace the hotend don't have to rewire everything.

Will a REVO SIX work on a Prusa MK3S+ printer with existing stock firmware or does the firmware need to be modified?

Works with stock firmware. No such modifications needed.

Thank you...if you have used one, are they more reliable than the standard V6 hotends, such as being less prone to jamming when using materials like PLA etc.?  I just ordered one to try in one of my MK3S+ printers