I've never printed with ASA, but as the room I print in occasionally has drafts that cause PETG to have adhesion issues, I'm thinking an enclosure would be in order.  As I've been reading up on this, it seems ASA fumes may not be the best things to be breathing in.  How do people vent these?  I am near a window, but I am concerned that if I run a dryer vent tube to the window I will just be subjecting the printer to outdoor temperatures (which at the moment are quite cold).   If there is already a resource on this topic somewhere, please just point me in the right direction.

Ideal solution is to have printer in a room, where you do not need to spend time. This is sure not always possible.

I have a lack enclosure, it is fine for printing ASA or ABS (useless for PLA/PETG). The enclosure is not 100% closed, there are venting holes, so the fumes for sure goes out.

I do it this way in winter. Close the enclosure. Open the window micro ventilation keeping the room heater running. So the room temperature does not drop significantly (lets say I still have 21°C in the room). Be sure that there is no wind (air draft) in the room. Enclosure heats up to arround 40°C during priting and the temperature in the enclosure is stable.

But sure, I do not stay in the room during printing for long time and vent it well when print is finished.

It also depends on how much/how long you intend to print with ABS/ASA. I have a LACK enclosure and print only small models with ABS occasionally... didn't found the fumes as bad as I was expecting. If I printed ABS all day, every day, I would add some exhaust system, of course.

I experience quite severe headaches and nausea when exposed to ABS fumes so I built a lack based enclosure fitted with fan enabled venting and supplementary temperature sensors. The exhaust fan speeds up and slows down depending on the heat being generated, and the enclosure temp usually sits around 36-39 degrees C depending on the room temp and heat bed temp.

The enclosure is vented using a sturdy 10cm diameter spiral tubing that is fed through a hole in a custom cut acrylic sheet that covers the open area of a window. Cold weather certainly can affect the enclosure temperature so a fine dust-proof mesh is installed between the vent pipe and the fan which helps stop draught traveling into the enclosure in all but very windy conditions. I've had good success with this method and it let's me print without feeling ill.

I think I understand what you are describing, but could you send a picture of your setup?

The enclosure I built is a two storey type so the lower enclosure is vented via a pipe through the upper enclosure and out of the top.  The enclosure is on castor wheels and the external ventilation pipe (that carries the fumes from both enclosures) is hung out of a window (or through a hole in a piece of acrylic that sits within the frame of an open window - but this isn't shown in the photos as it's currently in storage).

I can't show the dust resistant mesh that I mentioned but it's the stuff you buy to keep dust out of computer tower cases and it simply sits above the extraction fan and is sandwiched in between the fan case that's screwed into the lack table.  I designed pipes that pass through the surface of the lack tables and which the ventilation pipes screw into.

For servicing etc. the front doors are on hinges and stay up when opened using magnets, and all 6 of the remaining transparent acrylic panels can be easy removed as they are all magnetically attached too.  The enclosure tower's fitted with a transformer that powers the fans, enclosure temperature sensors (with digital displays) and 8 x LED light strips.  And the tower can be taken apart when needed as the wiring loom for each enclosure has been designed with easy detachable terminals.

It does its job and keeps draughts at bay and the majority of fumes away from humans.

This is the sort of anti-dust filter I used btw. 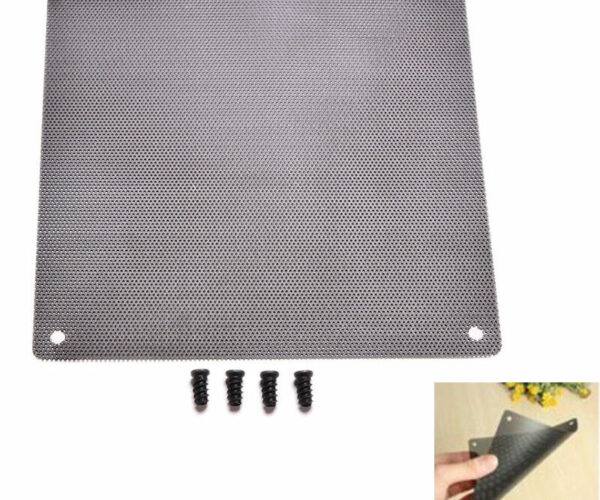 IIRC, it's styrene, not just nanoparticles, that's one of the ABS and ASA printing byproducts that's cause for human health concerns.  Would it be absorbed from the room's air if enough heavy duty recirculating active carbon air filters were inserted into the room, to catch whatever styrene is in the air?  That's an off-the-shelf solution that's both readily available and quite literally plug-and-play.  Or would something else be needed to capture the styrene?