[Closed] Can you get a perspective view in Slic3r?

Can you get a perspective view in Slic3r?

I am currently a Cura (15) user with a Printerbot and am looking at my next upgrade.

The MK2S is top of my shopping list and I am having a play with other software to see if its time to move on from Cura.

I am going Prusa variant of Slic3r a go, but playing with it, there is one thing that puts me off and thats the 3D view which is "orthographic" rather than "perspective" and to me looks totally wrong..

I get the reasons for having view, but don't like it and I am struggling to visualize the final parts, as my brain is automatically correcting for the perspective.

Is there a way to change the view to "Perspecitve" over "orthographic"?

Is there really no-one else who wants this feature?

I have been doing a bit of searching and found that its 'fixed' in the Slic3r code..

Towards the end of this discussion it talks about adding the following to the Preferences file:

I hoped I was onto something, so I drilled down into the Slic3r file system and found:

And the format looks right, so pasted in the extra section, and now Slic3r won't even start.. Looking at the "default" value, it looks like you need to do more, in the GUI.pm file, so I am at the limit of what I know and have gone back to defaults.

Anyone got any experience who might be able to take this further?

Just to break the silence, I can't say this is a feature that would be high on my priority list. I find the current views to be sufficient for my needs. I can think of many features that would be more important to me (pressure adjust on extruder, improved supports, etc).

Any advices given are offered in good faith. It is your responsibility to ensure that by following my advice you do not suffer or cause injury, damage or loss. If you solve your problem, please post the solution…

Has anyone done any further testing on this? This orthographic projection is highly counter-intuitive for visual users. I get why ortho exists in design situations, but I'm not modelling in Slic3r - I'm just looking for a visual representation of what's going to be on my plate and orthographic projection seems like the wrong way to handle that. It's the default projection used in every other slicer I've ever encountered, including Prusa Control, and enabling this functionality (which apparently already exists in the codebase) seems like a valuable feature.

I completely agree. Non-perspective views are workable but my brain just doesn't like it.

I'm paraphrasing from memory, but I recall that Jo Prusa stated that they are working to overlay the PrusaControl interface onto the Slic3r engine, so the entire interface, including perspective view, will be available along with undo and some other usability features. No idea of the timeline.

Fwiw, I'd also love to have a perspective view option.

of the Three basic types I prefer the trimetric projection it was the form I was taught in mechanical drawing class in the 1950s but I expect most will not know it today
https://en.wikipedia.org/wiki/Axonometric_projection#Three_types 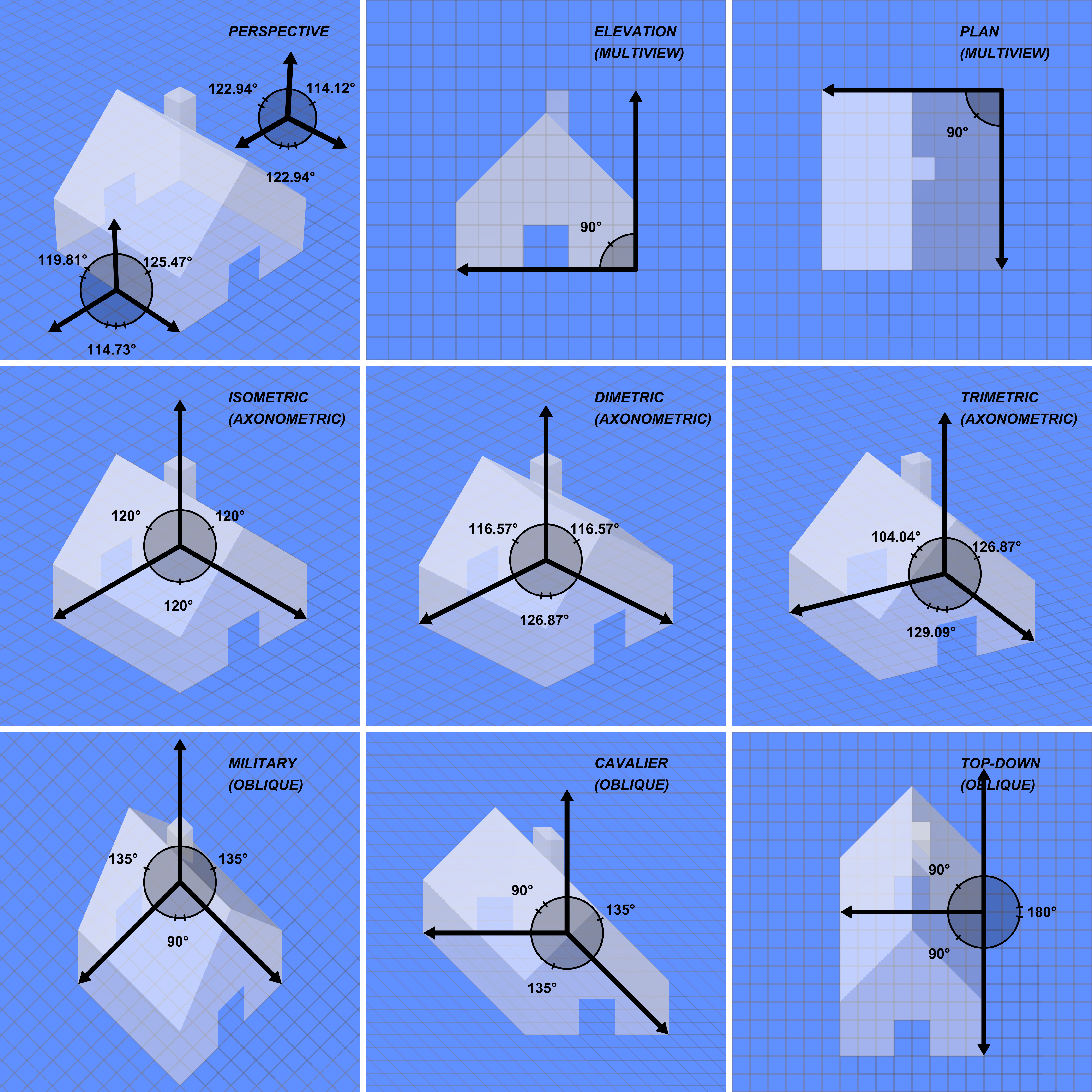 Various projections and how they are produced

The three axonometric views. The percentages show the amount of foreshortening.

Typically in axonometric drawing, as in other types of pictorials, one axis of space is shown as the vertical.

In isometric projection, the most commonly used form of axonometric projection in engineering drawing,[4] the direction of viewing is such that the three axes of space appear equally foreshortened, and there is a common angle of 120° between them. As the distortion caused by foreshortening is uniform, the proportionality between lengths is preserved, and the axes share a common scale; this eases the ability to take measurements directly from the drawing. Another advantage is that 120° angles are easily constructed using only a compass and straightedge.

In dimetric projection, the direction of viewing is such that two of the three axes of space appear equally foreshortened, of which the attendant scale and angles of presentation are determined according to the angle of viewing; the scale of the third direction is determined separately. Dimensional approximations are common in dimetric drawings.[clarification needed]

In trimetric projection, the direction of viewing is such that all of the three axes of space appear unequally foreshortened. The scale along each of the three axes and the angles among them are determined separately as dictated by the angle of viewing. Dimensional approximations in trimetric drawings are common,[clarification needed] and trimetric perspective is seldom used in technical drawings.[3]

Prusa has stated that they are going to port the PrusaControl interface overlay onto Slic3rPE, allowing access to all the settings while using the nice GUI interface. They've ported a few elements, but their current emphasis seems to be on MMU2 printing. Hopefully we'll see it before too long, along with undo and all the other nice features.