Any idea what happened to my trash-container ?
After printing many nice models, suddenly I am getting this garbage ...
Using the Prusa PLA delivered with new MK3S+ and latest slicer with standard temp settings.
The only thing I changed in the slicer is the scale, changed to 50%.

Thanks for your tips ! 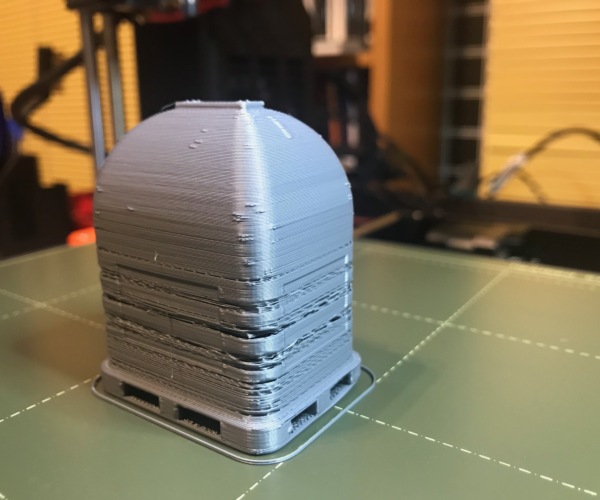 You have some seriously uneven extrusion.  I do see some slicing artifacts in that print, but you have some other problem.  You say you have a new Mk3s+, is that what you're printing on or are you using another printer?  How new is new?  How long have you been printing?

The big gaps are serious under extrusion which suggest either you have a clog or you're temperature is too cold for this PLA.  The accepted temp for PLA for many printers is 180, but Prusa uses 215, did you select the correct filament profile?  I've been printing for 5 years have 3 printers, it's not uncommon for me to use PETG on one, and PLA on another and go back and forth between printers and neglect to check my filament settings until I'm just about to print and realize I have to go back and reslice.

If it's a clog learn how to do a cold pull. https://help.prusa3d.com/en/article/cold-pull_2075

Thank for your guidance to a newbie ...

This is my first 3D printer, it is just one month old.  So far I printed +/- 50% of the standard PLA grey spool and selected the Prusament PLA profile (215/60 for all layers). Didn't even try the PETG yet.
Today, I printed another model, same size, almost perfectly !!! Surprising !!!
Nothing has been changed, same PLA,  and it seems that the problem has been resolved overnight by some spirit or ghost ...
Just understand nothing now !  I'll try to print that damned trash-container once again...

Here are my latest printed models, same spool with grey PLA, same settings, no change.  Not so bad result I think.  Does it mean that the issue could get automatically resolved after some time ? 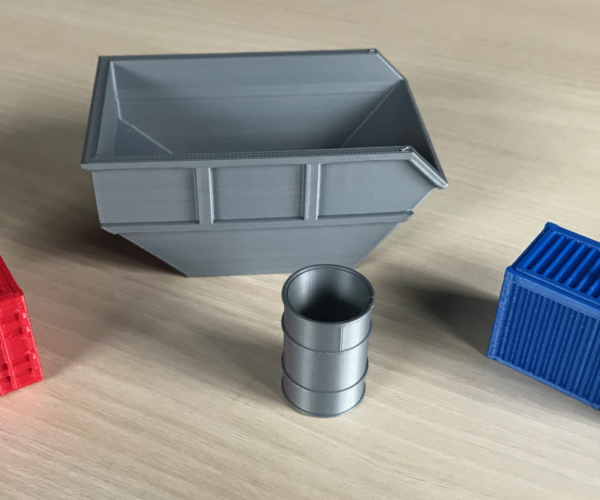 Try printing the trash container again. If you have the same problem, then you know the problem is likely to be the model. Some models print more easily than others.

...And if the problem is with the model, there might be ways to tune the slicing so that it will print.

Here are my latest printed models, same spool with grey PLA, same settings, no change.  Not so bad result I think.  Does it mean that the issue could get automatically resolved after some time ?

Maybe.  The gaps look like you had a clog which resulted in severe under extrusion.  It is possible that you got the clog cleared and everything is fine now.

However, it could be the model.  3d print models are comprised of polygons.  Polygons can be thought of as thousand or millions of tiny geometric shapes like triangles and rectangles.  Depending upon house the model is constructed some or many of those polygons can be broken.  It's important to know that not all 3d models are designed to be 3d printed.  It's also important to know that while 3d slicers do the same thing, they don't always do it in the same way.  A 3d model that slices and prints well with Prusa Slicer may not slice and print as well with Cura, and vice versa.  A model that looks good in a 3d preview may not look good in a sliced view.  Those are the ones you can fix, but then you have models that look good in a 3d preview, look fine in a slice view, but when you go to print them print broken.  One clue to a broken print is to look in the window on the lower right, if you see a triangle with an exclamation point in it it'll say something like, Auto repaired (12 errors), that means Prusa Slicer identified and fix polygon errors.  It may not have been able to detect them all or fix them all.  If what look like under extrusion is a model problem it could be a thin wall problem.  There is a minimum thickness your print can print, if the slicer is sending an instruction to the printer that is less than the lowest thinness you'll end up with a void.  That may be curable with thin wall dectection and setting the printer to print them thicker.  But it also may not be curable without reworking the model. YMMV.

Thank you very much for your guidance and your time !  Appreciate very much.