We noticed our Extruder Motor gets so hot, its deforming the PLA. We would like, befor trying and additional Fan, to reduce the extruder current.

I just want to verify that i modify the right value in the firmware file. I suspects its this value in the Configuration_Prusa.h:

Ok i was mistaken. The right place seems to be:

Oh thank you very much!

Ok i was mistaken. The right place seems to be:

That's the correct spot for a permanent change. The values are 0-63, with 63 corresponding to 0.96A.

For testing, the approach suggested by @chocki should work. (I haven't tested the M907 command myself).

I am replying to say that this was the only thing that worked after trying 10 or 20 other solutions that people had posted in different forums etc. I had non-stop problems with the flexfill 98A buckling inside the extruder gear area. It would appear at first glance that the filament nozzle clogged up, but after finding your solution that fixed it, I realized that the filament was just getting too hot and soft and not staying ridgid enough for the gear to be able to push it out.

I wanted to make sure to write this to let people know this worked because there are a lot of other posts out there that recommend other fixes that did not end up working at all.

So, @chocki - thank you for the fix that I had been looking for for a week... I almost gave up on ever using the $40+ roll of filaflex I bought!

You are my heroes, I think this is the solution. This is the explanation why I have these problems with PLA but not with PETG. The extruder motor gets so hot, I can't even touch it.

I've added pictures how it looks. Just for documentation for others who are looking for it. 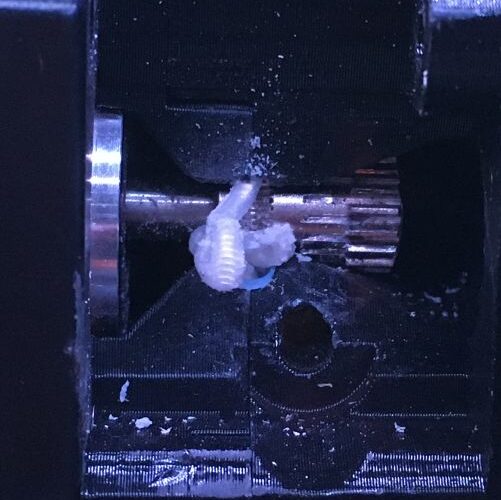 This was also my first thought. I've disasambled the complete hotend and cleaned it. In this process I've replaced the tube and noozle.

I think this is since I have switched the hotend from the version with the old filament sensor to the new one. I can only speculate. Maybe the motor isn't hotter, but the bondtech gears have lesser cooling, according to this post: https://github.com/prusa3d/Prusa-Firmware/issues/1757#issuecomment-570279834

I'm fairly new with the MK3S, but I don't think mine even has a teflon tube. My filament goes directly from the top mounted roll into the extruder gear chamber without going through a tube... Maybe I did something wrong or forgot to install a part lol?? Or maybe you are referring to the channel that the filament runs through AFTER passing through the gear (not before the gear)?

If you have any guidance on this, I could remove my nozzle and slide some filament through the gear and channel to see if I can feel any resistance... what do you think?

Also, my MK3S is only a month old. The filaflex 98A was one of the first filaments I used on prints... I think I used it the 3rd print I ever did. I am just mentioning this because it rules out that there is any wear from use over time that was causing extra friction.

But I do see what youre saying... through all the stuff I read while trying to find a solution to this problem, I realized that not everyone has this problem, some people were able to print w flexfill with all of the normal settings

I don't have any problems anymore, I just add the line of code to the g-code everytime I print w flexfill, so I don't need to figure anything out for my own reasons, but I'm willing to do some troubleshooting for the community if you guys want me to look into possible causes of this problem... Like you said, it's probably extra friction somewhere in the extruder that is causing the motor to have to work harder. When I have some time I could remove nozzle and feel how the filament runs through its channel, or I could disassmble the extruder to see if there are any print artifacts causing an obstacle in the channels...

The E3D V6 design requires a length of PTFE in the heatbreak so it's definitely there, but you didn't have to install it since the hotend assembly is pre-built. Take a look in your spare parts and you'll find an extra one.

You just solved a mystery that I have been curious about since the day I assembled my printer... I was wondering why that little PTFE tube was included lol. I have been worried that it was supposed to be installed, but I went through the instructions multiple times and couldn't find anything.

And thx for the info about the heat break... I was not aware of that

Thx for the info!