Moons Industries motors (MS17HD2P4100) are a well-regarded drop-in replacement for the Prusa stepper motors and seeing them mentioned in so many guides and threads led me to purchase 3 of them for my Prusa MK3S to replace the E, X, and Y-axis motors. They were functioning just fine for a couple of months. The sound reduction was incredibly (dead silent actuation on the x-axis, and almost no extruder motor noise) and there seemed to be a subtle but noticeable improvement in print resolution along sidewalls.

However, the Y-axis began to crash this past week which I posted about here. There were no visible physical issue (bearings were washed with IPA and re-greased with Superlube 21030, bed slid smoothly back and forth with belt disconnected, no tangling of wires, no obstacles to crash in to). As an alternative to Prusa Slicer, I tried using Ultimaker Cura and Slic3r but was still experiencing crashes. My firmware was up to date as well, and belt tensions were 265 on y and 244 on x. After multiple cycles of disassembly, reassembly, tightening all screws, ensuring wires are intact and snug, I finally switched out the Moons motor for the original Prusa Y-axis motor and everything ran perfectly even on the crashing files.

I haven't found anyone having an issue with Moons motors online, does anyone have an idea of what may be causing the motors to fail this close in time to each other?

I have tried contacting Moons Industries but due to a mistranslation of the issue, the weekend, and the time difference I have not gotten any relevant information yet. I have the exact motors that were recommended in dozens of Prusa upgrade threads, yet I haven't found any threads about others having this issue with Moons motors.

I would be grateful for any help!

Does anyone know the "driving voltage and driving current" for each axis? Moons Industries is asking what voltages and current I am running my motors at, and after searching the forums the most relevant source of information I could find is:

I tried to search "volt" or "amp" or "amps" or "mA" but the only result I found relating to power was under "experimental setting for E-motor cooler operation".

I went to Moons as you did but quickly switched to Trinamics motors for X and Y which are considerably longer in length and seem happier with less resonance (squeal?) on short rapid diagonal movements.

Although these motors are all rated at about the same power, they have considerable differences.  Both the original LDO and the Moons as well as the Trinamics are rated at 1A current but their DC coil resistance and impedance / inductance  (resistance to AC current) is considerably different.

The LDO is the highest (DC!) resistance, and if the current is equal at 1A, more heat will be generated and more power consumed. at 1A with DC, which stops the motor and "holds" it, the calculation is simple: LDO is 6.5w of dissipation, Moons, 3.9w and Trinamics 5.0w.   When the steppers are actually moving and not stationary, the power is switched on and off rapidly and behaves more like AC so the impedance or inductance becomes more of a factor.  Looking at the impedance, the LDO is again the highest impedance, with the Moons a lot lower and the Trinamics a bit lower yet which is different than the DC resistance. 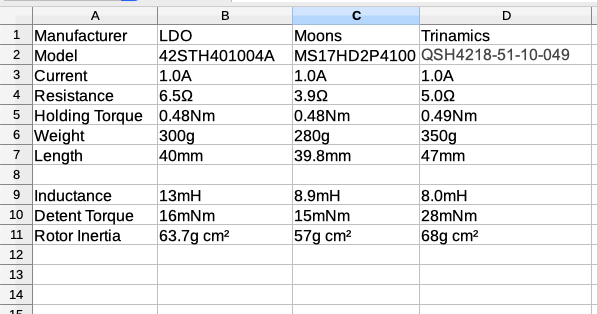 These characteristics are why the LDO motors run warmer than Moons, I think.... for the same 1A of current, they dissipate more heat.  This of course is assuming the EinsyRambo is actively regulating the current to the same level.  If not, the Moons and the Trinamics would draw more power due to their lower resistance and possibly damage the controller .. or at least generate a lot more power and heat, which they do not.

So why do I feel that all of this is important?   Well, the EinsyRambo  has been programmed to take best advantage of the LDO motors.  We are swapping motors out for considerably different ones without reprogramming the controller.  This can have unexpected and sometimes undesirable effects.

So assuming that the Moons steppers have somehow become damaged, which they apparently have,  how did this occur?   Could they both be defective?  It doesn't seem likely.  Could the rotors have become partially demagnetized somehow, perhaps by the interaction of the magnetic fields, the intensity of which were set for a different motor?

It will be interesting to see what Moons has to say.   The fact that they actually responded to you and are taking an interest is a great sign.

If you are local to Chicago, you would be welcome to try my spare Moons motors... they have only a few hours of run time.

So why do I feel that all of this is important?   Well, the EinsyRambo  has been programmed to take best advantage of the LDO motors.  We are swapping motors out for considerably different ones without reprogramming the controller.  This can have unexpected and sometimes undesirable effects.

So assuming that the Moons steppers have somehow become damaged, which they apparently have,  how did this occur?   Could they both be defective?  It doesn't seem likely.  Could the rotors have become partially demagnetized somehow, perhaps by the interaction of the magnetic fields, the intensity of which were set for a different motor?

Thank you for the very detailed comparison and potential explanation for the Moons motor failures. Given that there is such a significant difference between the LDO and Moons motors in terms of resistance and inductance, I am surprised that I have yet to find another Prusa user who has encountered issues with the Moons motor swap-- it definitely seems like a likely (or inevitable) scenario given how different the motor specifications are.

Also, is there any way this information about the LDO motor may be utilized to estimate the output of the stock controller? I have been scanning the forums for specifics, but have not found any mention of what the factory settings are for the "driving voltage and driving current". I noticed that it has been mentioned that silent mode reduces the current, but there is no specific information available (that I have found) regarding from what value to what value.

Thank you for your generous offer! Unfortunately I am all the way across the Pacific, separate from the Lower 48. I appreciate it though!

I can think of one easy test to make....

If you have an Ohmmeter , check the coil resistance of the malfunctioning stepper motors.   The Moons should be around 3.9 ohms at 20c. Both coils in a motor should be about the same resistance, both at the motor connector and at the Einsy connector (with the motor connector re-connected). If there is a large error, like 3.0 ohms or less or 5 ohms or more, or one winding is significantly different than the other,  a fault in the stator windings is indicated.

In particular, likely faults would be a poor internal connection causing high resistance, or  possibly if the coils had overheated, they could short and cause low resistance.