I have had my Prusa i3 Mk3s for about 3 weeks now and it has been printing around the clock ever since! Everything was going fine until about 3 days ago when out of nowhere, during the initial preheat before a print, the temperature just kept rising higher and higher (was printing with PLA, set to 210C for first layer.). It made its way up to 295C when I had enough of seeing my filament ooze out and burn on its way out so i hit the reset button on the front control. After that, It has happened a few times where the heat (as measured by the sensor, I will not gauge it by touch lol) will either continue to rise, or the opposite and drop (though not as often). The second time was when i was replacing the nozzle after it was all charred from the first time. I set the nozzle temp to 280C as was recommended in Prusa's video. After a few seconds, it started climbing up past 320C quickly and a safety measure shut everything down. After this, i left my MK3S off for a few days.

Coming back to it, it has happened a few times where the print will crash due to "HOTEND THERMAL RUNAWAY", but always at the start (either on preheat, bed mesh leveling, or by layers 1-3).

Since then, i have been able to print again. However, i am actively monitoring the temperature and I always see the same trend:
- Preheat is going to correct temperature (So far after 10 prints, fingers crossed)
- Hotend temperature goes UP during the 7x7 Bed mesh leveling (lowest was 4C, highest around 30-35C, average 20C)
- slowly stabilizes during the first layer
- 2nd layer onwards drops the temps by 10C (from 210 to 200)
- Hotend temperature will drop from 210 to about 190. From here either it takes about 3-4 layers for the temp to creep its way back to the target of 200C, or it will slowly drop to somewhere between 175C-185C and the print stops with "HOTEND THERMAL RUNAWAY".

Below is a snapshot of starting a new print. You can see a sharp rise (this is during the bed mesh leveling) followed by a small dip (This is after layer 1 is complete). In this model, the first layer and regular temps are 220/205. 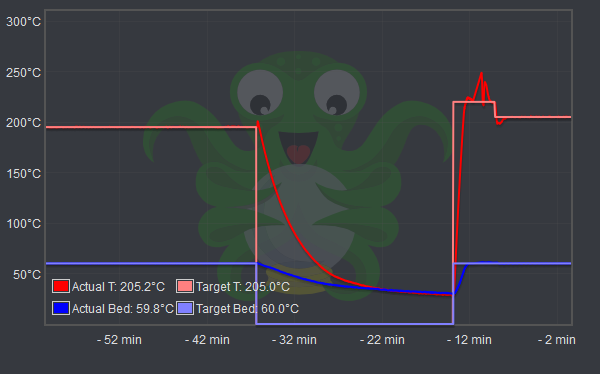 I suppose I should start by asking: Is this normal behavior? I can't definitively say these never happened before my incident as I would just ensure it would preheat to the right temperature, walk away for 5mins, and check how my print was doing and temps were okay as well. But now I find myself paying close attention on startup.

If this is not normal, has anyone experienced this issue? I have quickly inspected the thermistor and no apparent damage. I even tested the following:
- preheated doing "Preheat - PLA 215/60"
- wait 10mins
- move to home
- wait 10mins
- move X axis to other side
- wait 10mins
- lift Z about half way
- wait 10mins
- Move X to half
- wait 10mins
This whole process and the temps never changed (stayed at 215C the entire time), this would suggest that this isn't a worn cable that triggers on movement. Also since it doesn't affect the temps once the print is past its 3rd layer and by then its moving around.

Any ideas would be of great help. Thanks.

Here is also a graph only showing after the Bed Mesh leveling is complete. 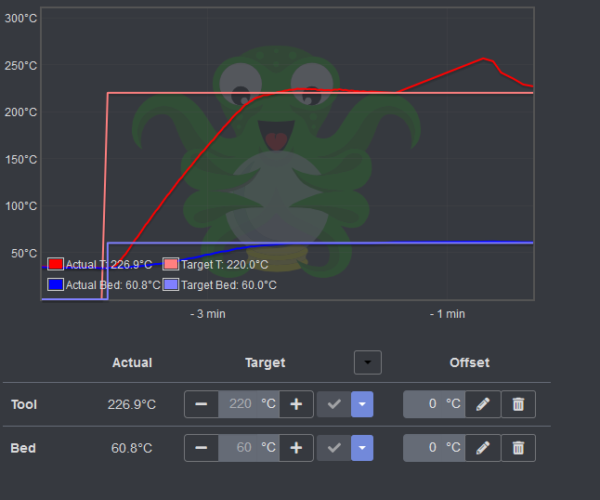 I had some temps fluctuating wildly and a heat cartridge replacement fixed things.  Maybe this sheds light:

Hmm, worth a look.

Shortly after this post i had enough a did a factory reset which resolved the issue for a good week. Its the inconsistencies that make it hard to troubleshoot. Even now it might happen once every 15 prints or so. And when it does, i simply power off the printer for over a minute and then it behaves for a few days until a fluctuation occurs again.

i have already had to deal with this problem twice and was able to eliminate it by renewing the power and thermistor wires and replacing them with flexible and heat-resistant silicone wires. A wire break or loose contact within the insulation is not visible and can be very difficult to find.

i have already had to deal with this problem twice and was able to eliminate it by renewing the power and thermistor wires and replacing them with flexible and heat-resistant silicone wires. A wire break or loose contact within the insulation is not visible and can be very difficult to find.

It started getting worse so i just went ahead and replaced both the thermistor and the heating block. Its been pretty good ever since. It was a very easy procedure to do for anyone looking at doing it.