So, I woke up to this this morning. The machine somehow was turned to its side, there was stringing everywhere and I had an error saying (ERR: EXTR. FAN ERROR.

The nozzle surprisingly looks clean, but I noticed the stringing was all caught up around the SuperPINDA. I checked all my belts, the gcode is fine. I really have no idea what could be the case with this? Any ideas? 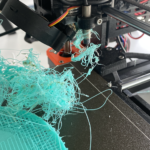 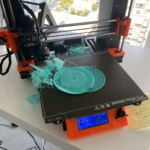 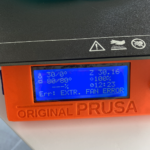 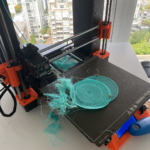 Well the ext fan error is extruder fan error, so the one on the side that cools the extruder rather than the front parts fan. I would say one of your spaghetti strands got caught in the fan and stopped it which would have caused the error. Even a brief stop will cause it.

As to the cause , too little to go on to be certain. However my best guess, your lower section looks like it’s still attached to the bed but the upper ones aren’t attached to it. I’ve seen similar in the past where the extruder clogs and causes almost a missing layer as filament is t extruding then it recovers and prints for a bit. As it’s not really attached at that point even a small bump can cause it to break loose from the layers below. Looking at yours it looks like it’s done that several times during the print building up a few good sections connected by ones that are almost missing. Then like a Jenga tower at some point it’s come crashing down and the sections have been dragged all about. Which explains the one at the rear of the printer between the rails as well as the others.

Oh wow, alright. Yah, the lower section was still attached to the bed, you were right on that. Maybe a cold pull and try again?

Oh wow, alright. Yah, the lower section was still attached to the bed, you were right on that. Maybe a cold pull and try again?

You may need to tweak the tension of the extruder idler to reduce the chance of it happening again.