I've just finished assembling my Prusa i3 Mk3S and it failed the Self Test with the dreaded "Axis Length X" error.

The X axis appeared to move freely from end to end.  I checked all the usual culprits - obstructive zip ties and wires, belt tension, screw tightness on the X-carriage-back and none of them fixed it.  I even tried XYZ calibration but the Pinda ended up off the side of the heatbed so the X axis was obviously way off.  I tried the "Move X" function and found that the axis went from 0 to 220 end-to-end which meant it was significantly shorter than expected.

I came across this post which mentioned that somebody had X and Y axis pulleys that were different diameters.  I assume "GT2-16" means it should 16 teeth: my X pulley has 25 teeth (see pic). 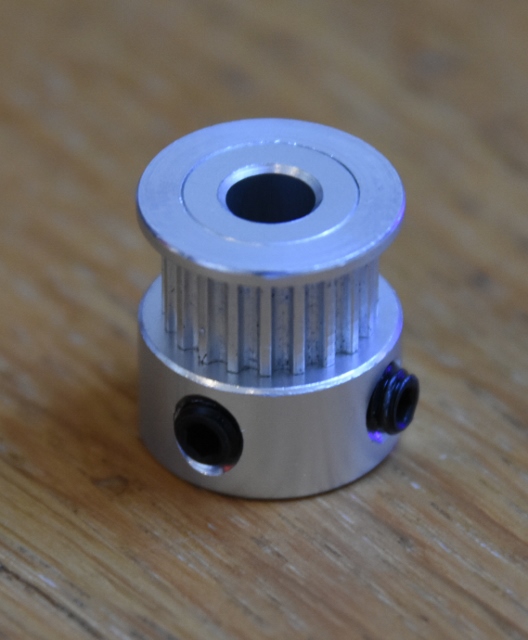 I swapped the pulleys over from the X and Y axes and the X axis test now passed.  Now the Y axis test fails on axis length and, when I try Move Axis, it also only goes up to about 220.  This pulley must have too large a diameter.

My conclusion is that the smaller pulley (the one originally on the Y axis) is the correct one for both X and Y axes.

The manual calls them both "GT2-16" pulleys so they should be identical.  Did I just get the wrong pulley in my kit?

yes!
have a word with support, on 'Chat' on the eShop page

The 16-tooth pulley on my X axis works well.

Can you please confirm how many teeth my Y axis pulley should have?

Both tooth number (must be 16) and tooth profile are important.

The 16-tooth pulley on my X axis works well.

Can you please confirm how many teeth my Y axis pulley should have?

IF you bought the kit from Prusa then as Joan pointed out, you only need to speak to live chat - they would arrange a free replacement, so you didn't need to "ordered a cheap 16-tooth pulley ".