First layer, right after gap filling the hex pattern, it starts printing the infill at the edge and the first ~10 extruded lines are so severely underextruded they are basically missing (big gap, only stringing between the perimeter). Tried printing a cube in the same place, it prints fine. Printed a cutout of the cover with a little bit of hex pattern and some infill: there the missing infill is much smaller but still clearly visible and reproducible. Printed the same thing without gap fill - prints almost cleanly (not sure, might be a bit of underextrusion there, but nothing that would ruin the surface).
Tried:
- Different infills
- lower retraction length
- higher and lower extrusion multiplier
- checked extruder idler / gears and extrusion length firmware settings
Any idea what else I should try? Does this look like a linear correction problem? Default always worked for me.
( raised Z a bit for testing because 1 layer prints were annoying to peel off )
AaaaAa why is this UI so glitchy halp 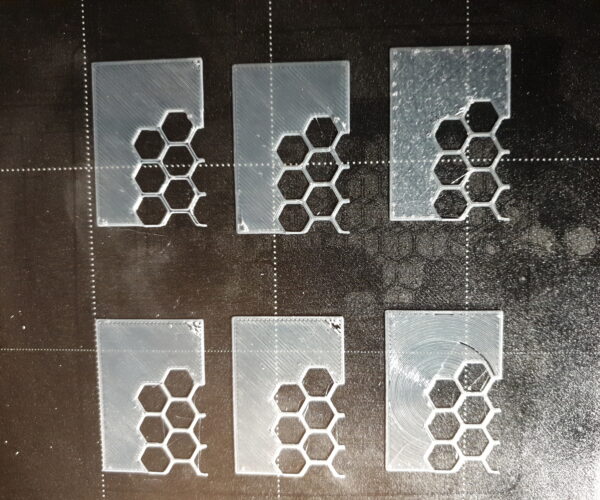 ( Argh I broke my upload screen and ended up in the wrong place somehow and can't edit or move the topic :/

That's not underextrusion, it's lack of adhesion.

Oh that's weird... I thought the lack of adhesion was just a side effect of the extrudate ripping due to uneven extrusion or something? I had to powder the plate and raise Z for testing because it's a pain to get the single layer prints off otherwise / printed POM gears without an enclosure on top of that PETG yesterday and haven't changed anything since.

This is not gap fill: 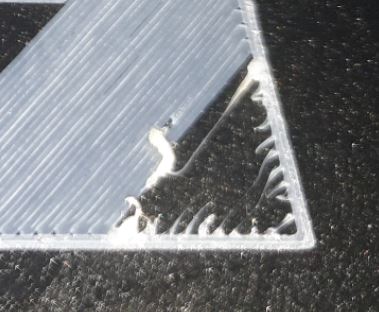 ps: and the layer is a bit over-extruded or Live-Z is too low.

The gap fill is between the hexagon perimeters and printed directly prior to the part of the infill that fails (visible from stringing). All infill that is printed within a couple of seconds after that gap fill fails. For the second photo I disabled gap fill on one of the test parts, one is overextruded (I think I set it to 120%), the other ones have different bottom infill. All test prints I made except for the

- the ones with gap fill disabled

- The ones with Hilbert curve

have a big visible gap in the infill right after gap fill.

Live-Z should be approximately 30 too high. Unless I broke something on the extruder, extrusion multiplier should be calibrated as well as possible, if it looks overextruded that *should* be either the transparency (the prints sometimes look overextruded to me because I can see the boundaries of the lines through the surface, but it's smooth to the touch) or it's over-extruded due to variance in temperature / filament / speed / don't know what. I can't tell from the photos which one it is.

Looking at the cutout with the archimedean chord infill again, I just noticed there's a fat string going from the end of the gap fill to BETWEEN the missing part of the infill and the (late) beginning of the infill. This should only be possible, if the beginning of the infill was stuck to / dragged away by or together with the string, right? Or a blob accumulated on the nozzle during gap fill? Why only after gap fill?? So, the problem could be: "fat string after gapfill" which means, it's probably overextruded after all and slightly too hot, it just doesn't accumulate as much during normal infills? Or are there any other possible reasons why that happens after EVERY gap fill specifically? The rest of the time, those strings don't seem to bother the print.

Going to measure extrusion multiplier again, maybe the filament has fluctuations. Also temperature, maybe I broke the thermistor again. Anything else I should try?

Definitely too low.  Raise it a little and clean that sheet. As little as +0.020 could make a difference.

The best approach is to save a project that reliably demonstrates the problem you are having. Rename the file adding .zip the filename and post it here (example.3mf.zip).

I think you are printing an einsey box for the printer.  This is one of the most challenging prints because you must have Z absolutely perfect.  I did a full place first layer test before attacking this one.

I think you are printing an einsey box for the printer.  This is one of the most challenging prints because you must have Z absolutely perfect.  I did a full place first layer test before attacking this one.

I mistyped.  I think you are printing the same one I printed.

I think I found the problem: the bondtech gears were encased in a thin waxy layer. During gap fill, the filament probably retracts, then slips during ramming (/deretraction?) - so it ends up further retracted than it should be and the more gap fill there is, the further the filament is retracted?

Well, so far for the current theory, not sure if it makes sense. Can't reproduce the problem any more after I swapped the gears for some new ones, going to try a couple of prints to test if it happens again. Tried to clean the old gears with acetone and dichlormethane but they still feel weird (kind of like a cracked candle) and don't have that tiny "bite" that they're supposed to have.

Then the problem solves in my book.

Yes, results have been consistent so far. Also cleaned the inside of the nozzle since I don't know what the extruder has been chewing on (Filament? PTFE Tube? Or maybe I accidentally used hair spray instead of air spray... possibly all of the above).