I received a Mini two weeks ago. It was in an inoperable state as it would not lay the first layer without completely jamming. Knowing my way around 3D printers, I knew how to get the filament out etc and did so. As this kept repeating itself, I started looking in to the issue and many folks have stated the heat break/hot end needs to be moved upward. Prior to performing any adjustments, I contacted Prusas "chat-a-ma-bob" which was very helpful and stayed with me online for the entire hour or so it took to adjust the hot end. Prusa provided two pieces of PTFE lining that goes within the heat break and both of them were too short by their spec. As others had suggested, my heat break was seemingly way to low as I saw smooth section of the heat break.

In short, I moved the heat break up as far as I could and cut a piece of Capricorn tube that I use with my other printers to length, inserted that in the heat break, tested it with a PETG model and it worked great! It looked very well and for the first time after days of fighting it, I was a bit relieved.

Fast forward until now (when I'm printing PLA). I just loaded up the Prusa provided PLA and it would not print. It jammed and the extruder chewed a hole right through the filament. I tried adjusting the idler screw to no avail. Went back to PETG and it was fine again. Opened up a fresh spool of Proto-Pasta PLA and it just would not print. It WON'T print PLA now..

I removed the tubing and with the hot end hot, I pushed a piece of PLA down the block. It got stuck! PETG works fine but PLA doesn't.

I just replaced the section of Capricorn tubing and replaced it with the (shorter-than-spec) PETG that was provided with the machine and push a piece of filament and it melts as expected. Somehow the Capricorn tube wouldn't permit the PLA to melt, although the PETG did just fine.

I'm running it right now with a 42.4 section of PTFE tubing that did jam on me before. I'm hoping this will be the last of the adjustments I'll need to make.

I just don't have confidence in this machine however. I bought it thinking it was going to provide a level of quality that my Creality machines don't and to be honest with you, the machine has been hot shit in a cute form factor.

After all of my troubles, I wound up scratching up the build plate, boogered up the heater block and would feel weird asking for a return at this point. My friend is offering to buy it from me but I don't particularly feel comfortable selling it to him

I understand some of you all or maybe even most may have received a great machine, but to those that have another machine to compare it to, how to you compare the mini to your other machines?

My Creality CR10s Pro V2 and Ender 3 OG as well as my friends CR10, (3) Ender 3's and my work's Zortrax are ALL running circles around the Mini.

I have 2 mini (with same mod that you did, otherwise completely unmodified), 2 MK3, and 2 CR-10 printers (and a few others). For the past year, it has worked well to simply run PLA about 10C hotter in the minis than in the other machines. Just this week however, one of the minis has started to do as you described and clog up regularly when printing the exact same gcode that works fine on its twin. Maybe the fan is getting dirty and slowing down, idk. I'll probably look into it further in the next few days when I get some time, but I thought I'd add a second data point here for you.

I appreciate the input. Just after submitting my last post I screwed up this time. I was printing something for my wife and left a small spool of Proto-Pasta PLA unattended and it knotted up and damaged the filament going in to the run-out sensor. Lol, I can't get a break. 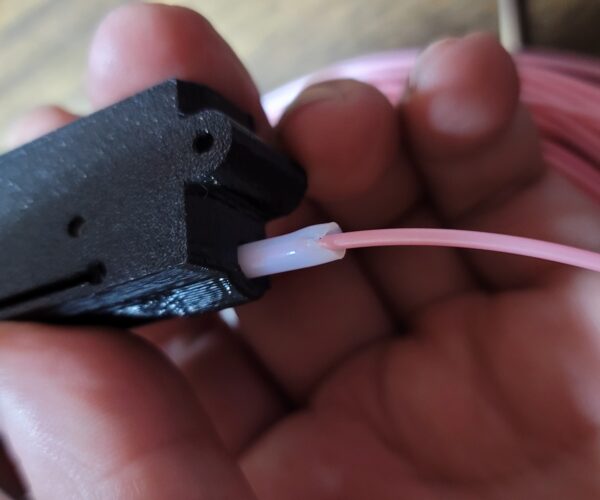 If that indentation isn't a broken part (can't tell and I'm not in front of my printers for reference) and it's just the little piece of PTFE that's messed up, it's pretty easy to replace. It just pulls out and I used longer pieces to make them easier to reach on my Minis

Yeah, it's just the PTFE tubing. I'll just cut a piece of cap tube in there if needed. I'm not particularly worried about this since it works as-is.

Out of curiosity, you mentioned you have the same modification as me, are you talking about the Capricorn tube in the hot-end? If so, have you tried running PLA through it and do you notice anything odd with any other filaments. I find it peculiar that PLA wouldn't melt in the heat block, when PETG would just fine.

I do have capricorn tubing in the hot-end. I think the issue with PLA might be a combination of too much heat getting up too high and too much retraction. Maybe because PETG melts at a higher temp to begin with, it's not having the problem. I'm going to make sure my heat sink isn't dirty/blocked and that the fan speed is similar to the Mini that's working well. If those are good, I'll reduce my retraction setting a little before I resort to harsher things (like yelling at it or putting it in a corner without electricity until it decides to behave).