English
Login
Forums
English forum
General discussion, announcements and releases
Why does filament snap on me after a day or two?

Why does filament snap on me after a day or two?

Why does filament snap on me after a day or two?

I've had this happen several times. Once it happened on both my printers when I had not been down in the shop for several days. It breaks off right above the print head, as shown in the photo. The ambient temp is within a couple degrees of 70°F. Humidity is above 50%. (Hard to do much about that in this area - always humid!)

I've wondered if it could be the angle the filament is at. You can see that the natural curve of the filament, from where the spool hangs, is at an angle from where it goes into the hot end. However, when printing, there isn't a sharp curve, it's a gentle curve. I have the spools on the included spool holder on my MK3S+ and I use a filament guide that helps the filament to come off the spools smoothly.

I didn't have this problem in the past, it's only been as the outside weather cooled down. 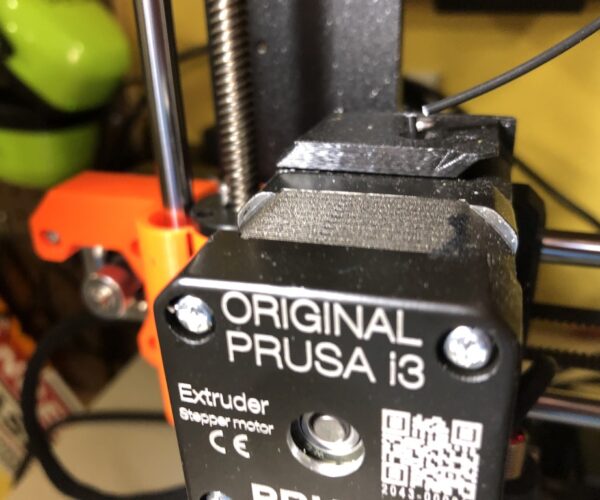 I find this happening with older filament and cool temperatures
dehydrating the filament has helped in a number of occasions, but some filaments seem to get beyond recovery!

I have a roll of transparent PLA, that I can do nothing with!

PLA often gets brittle if left humid for a while. If you're unlucky surface cracks propagate through the whole thickness and ... snap.

Luckily the filament left on the roll is usually not so far along the uneven-swelling-with-moisture process so even when the exposed bit snaps the bulk of the roll can be rescued by drying.   If a roll is left for long enough though, the whole lot can craze and no amount of drying will repair the cracks.

You should be able to dry the filament out using a dry box.....

Okay, thanks. I guess along with making an enclosure for handling venting (I have to make one for my CNC, since the laser produces too much smoke anyway, so I'm doing one for the printers), I'll have to deal with the humidity issue, too. This is going to be frustrating, but it's better to know and deal with it now.

If I’m not going to be printing for a few days or more I’ll unload any filament from the machine and pack it into a Mylar ziplock bag with some desiccant packs.

I assume the longer it stays exposed to the elements, the greater the chance it will begin to degrade and absorb moisture.

If you have a filament dryer, food dehydrator or proper oven, you can try drying the roll and see if that helps.

Filament absorbs water surprisingly quickly, in some cases the later part of a long print can be affected when the filament was perfectly dry at the start...

After a week exposed in a room with a dehumidifier running there was noticeable deterioration of PLA finish...

All stuff I need to know, but frustrating. My study and my shop are in different buildings and it makes life much easier to have filament on the printer so I can send a print job down to the printer from my study. I'll have to figure out what to do about tht.

I guess it's not going to be as easy a solution as I had hoped.

Is this related to humidity?

I have a reel of Sunlu 1.75 black PLA that I've been using for a few months. It's the one in the photo, where the filament broke. I had a problem with it autoloading yesterday. It did load and go through the rest of the loading process okay (as in the firmware asking me if the right color was coming out and so on), so I went on and printed with it. After all, I had used it a day ago without issue.

The print only did 1, maybe 2 layers and the filament stopped coming out. (I saw this later, when it should have been on a higher layer and wasn't extruding anything.) After testing I found that the filament on this reel is NOT working - the extruder just can't seem to get a grip on it and push it through to the hot end. Could this be humidity related? Maybe exposure to humidity has lead to it shrinking in diameter? As I mentioned, it was working fine a couple days ago.

Also, for reference, current humidity in that room is 37%. (We're in a humid area, I glanced at the thermostat, which is new, and saw "69" and wasn't thinking about temp and thought, "That's about right for this time of year, probably." Then, later I realized that was the temp - so I may have misstated humidity levels up above.)

Back to the broader topic, at this point I'm using PLA. The video from CNC Kitchen said that wasn't as sensitive as a lot of other filaments. It's likely I'll be sticking with PLA, PETG, and the others me mentioned, so it looks like making storage containers for the filaments I'll be using isn't a herculean task. I do have some planning and work on that, though.

Tho only roll of Sunlu I've bought is long gone so I can't comment in detail - 'though the brand got struck off my list for, iIrc, uneven diameter...

Perhaps they've fixed that by now.

Damp filament does suffer from a range of minor problems apart from stringing so as a rule try drying before making drastic changes to any settings.

Also clean out the Bondtech gears and make sure the extruder idler is in the Goldilocks, not too tight, not too loose zone.