i often print Multicolor Objects by Layers. And it worked really well with the Mk3.
Now i bought the MMU2.0 and i am a little bit disappointed that this doesn´t work anymore.

How can I command the colorchange for individual objects? Of course, I do not want to cut the object into pieces?

I just want to use the next extruder with the other color starting at a certain layer. Also, I do not need a purgeblock for this action. That only unnecessarily wastes filemant.

I just want to use the next extruder with the other color starting at a certain layer. Also, I do not need a purgeblock for this action. That only unnecessarily wastes filemant.

I'm unclear on what you want. Do you want the printer to pause and ask you to manually change filaments like the old colorchange?

Or do you want it to automatically change filaments when it reaches a certain layer?

If you want the latter then you will still need a purge block (sorry!) because the printer needs somewhere to put the purged material. But the purge block will be mostly hollow and consume very little material.

You can set Slic3r to change materials at a specific Z height by double-clicking on the object. In the window that pops up click "load generic" and select "slab." That creates a modifier which will let you specify a different material at the height you specify.

I thought there is a possibility that the filament is changed but the printer can just continue with the other color (the slight color gradient would not matter).

Is there still the possibility to do it manually? So pause for printing. And choose other extruders and continue printing? Because I have not found a way that the filament comes to the extruder on a break. It always stays up in the MMU.

Is there still the possibility to do it manually? So pause for printing. And choose other extruders and continue printing? Because I have not found a way that the filament comes to the extruder on a break. It always stays up in the MMU.

I think you can still have it pause manually using Colorprint, if you slice it in "single material mode."

But I haven't tested this.

The MMU can never automatically change filament without some waste, since the ramming before the old filament is unloaded requires a small amount of waste material to be extruded.

Maybe the auto deplete function will interest you. Check it out.

Thats a nice feature but not exactly what i want. I want to change the color exactly at one specific layer.

How is it possible to say Slicer PE that he should change the color at a specific Layer? I can´t find the option to do that. Do i have so cut the object in pieces? (I hope not!)

This is a little bit of an advanced Slic3r feature, but it's not too hard...

My Slic3rPE 1.41.1-rc+win64 did not have a MK3 + MMU2 configuration option. So, I applied the list of steps that peter.122 listed and did not get the desired results. At the color change, the filament was not first ejected from the print head, so when the MMU tried to unload it, a tug of war ensued. I elected to examine what happened in the gcode during a filament swap while printing the lizard. That helped a lot, but as I did not want to build a tower for a single filament swap, I incorporated some of the gcode and not all. Also, I used a very simple object to modify and test the gcode, taking less than 10 minutes to print.

I used a text editor to accomplish all this, I made some changes at the beginning of the file to make the initial stripes a little closer together to allow room for two more stripes at the filament swap. This keeps the whole print area clear for the printed part(s).

If you search the attachment for T0, this gets to the initial load and stripes. When you search for T1 (past the temperature settings), you get to the filament swap portion inserted by Slic3r. I added code to retract the filament before the exchange, and to lay down a couple of stripes to clear the head of the old filament. After the stripes, I raised the head so the head does not hit the part on the way back.

If you search for Unload, you get to the final bits that I messed with. Just before the unload, I retracted the filament, moved the print head up, and homed the print bed to the front.

I tried to do as little as possible to the existing code. I did not mess at all with the original code that actually printed the part.

What happens is, you load trays 1 and 2 with PLA, load the MMU2, start the print.

I attached the gcode, but added .jpg so I could upload it.

Have fun with it.

OMG that is way too compicated! 😯

That's your problem right there.

You should make sure you have the right profiles loaded in Slic3r. If you're trying to print using the MMU but with a non-MMU profile you will literally never get it to work.

I tried this and then sliced and performed a preview. I did not 'see' any color change in the model the chosen layers whereas if I perform the multi STL imports I see them just fine. Is this expected behavior?

It seems to me though, that a simple tool change script could be called at a certain layer height.

Look what i have found in the MMU 2.0 Handbook!

Colorprint should be compatible with MMU 2.0 but it isn´t! 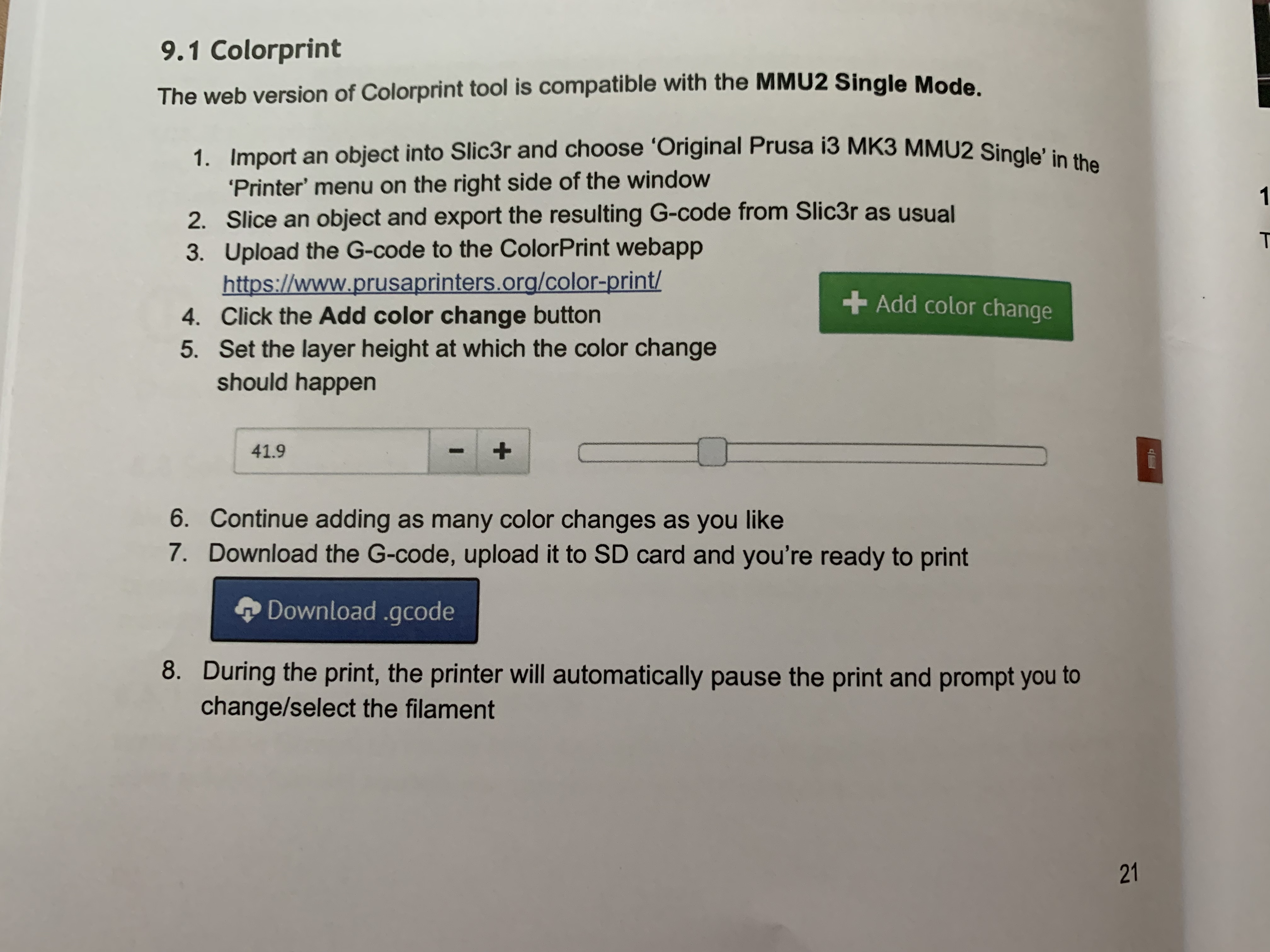 I have been plagued by this issue also, it's driving me crazy that there isn't a fix for it yet. I like to print multi color by layer myself and this issue has pretty much bricked my machine.

This is a little bit of an advanced Slic3r feature, but it's not too hard...

Is it possible that this is broken in slicer 1.41.2?
I just tried exactly this and the resulting gcode does not include any T* commands at all.

Edit: Just found the problem. I had wipe into object enabled for the object, and that seems to throw slicer off.
I did that because I was looking for a way to print without a waste tower, because I wanted the color transition to be a part of the printed object and in addition avoid waste.
Does not seem to be possible.

Edit2: "wipe into object" only works if you have more than one object.

I agree, but it does seem to work. I just wish the slabs were not so prominent in the 3D view of the Plater, and that the selected extruders properly showed in the 3D preview. I have to go to the "Preview" tab to actually see the colors. This solution also doesn't work with Spiral Vase mode, but I sort of get that. It does increase the likelihood that my vases will have an ugly seam. I guess I will need to print one and see.

This thread is awesome as I too am looking for a simple solution to do automatic "Colorprint" type filament changes using the MMU2 without a wipe tower. The post by peter.I22 is a very elegant way of doing "Colorprint" in Slic3r.

A couple of additional notes...

It appears that selecting the MMU2 printer (as opposed to Single Mode) is required in order to select different filaments in the "Settings" window and then slice. This will create the mandatory wipe cube.

However, since we don't care about gradations in our filament between color changes, the amount of purging can be set to almost zero. This is set by pressing the "Purging volumes..." button on the right side of the screen under the printer and filament settings. Ideally, setting all the boxes to zero would completely eliminate the wipe tower, but that doesn't appear to work. However, the resulting wipe tower is *very* small.

After thinking about it, we really need at least a little bit of purge to ensure that there is actually filament flowing correctly - regardless of color. A literal purge of zero could lead to structural holes in the print.

Since I came across this problem using Slic3r 1.42.0, and I could not exactly apply the solution written by peter.I22 since the UI changed, here is how to apply it using 1.41 and newer (at least, until 1.42) :

Here's a picture of what it should look like if you've done this properly:
https://imgur.com/a/M3fUeXz

Do note that it will build a little purge tower, which feels unnecessary, but eh..
Do also note that the slab will show opaque until you click elsewhere, then it should change to being transparent.

As for why you would wanna split per layer, well.. In my case, I've got some cheap filament which doesn't stick to my MK3's plate. I just want the bottom layers to have the good filament, and then change to the cheap one that will stick to the good one without any problem.

Disclaimer: I'm printing the trenches from https://www.thingiverse.com/thing:2713364 , I am not the owner of those models, just printing for fun.

Is there any way to pause printing at a certain layer like colorchange did? I noticed if I am doing MMU2 with the above solution, there is no way to pause to, say, add in hidden magnets to a part (which is really fun to do!). I have a part that used multiple materials (by layer) that I also hide magnets. This is to help with a mechanical connection (it's for my DIY film rotary for the curious - it's how the tank mates to the motor). It'd be nice if MMU could take care of the material change by layer but I can still have a pause so insert the magnets at the right time.

Any thoughts on how to get this done? Can I manually inject the pause into the GCODE still I wonder?