I did the mods I announced above :

Witht he PTFE now going in it, isolating a portion of the path :

Thought it continuesd printer longer with ~0.5°C more ambiënt, it did still get jammed. I tried 2 different PLA's and multiple prints, but they all keep jamming about 1 hour in the print where it starts to do lots of retractions.

I did get some more data... When pulling out one of the jammed filaments I again had this strange pull-out where the tip was fine and still had gear marks in them, but the mid section was softened and stretched, and then I head the gear marks again above it.

I think what is happening is that actually the whole mid copper radiator is also getting enough heat from the black frame to soften the filament in that whole portion. The old Dragon Hot-End had no Copper to Aluminium frame contact.. The new hot-end does have contact between the frame and the copper radiator and this seems to be getting hot enough to soften the PLA in that whole section enough that it stretches when pulling out. See below plus a little explanation scribbles of what I think is happening. 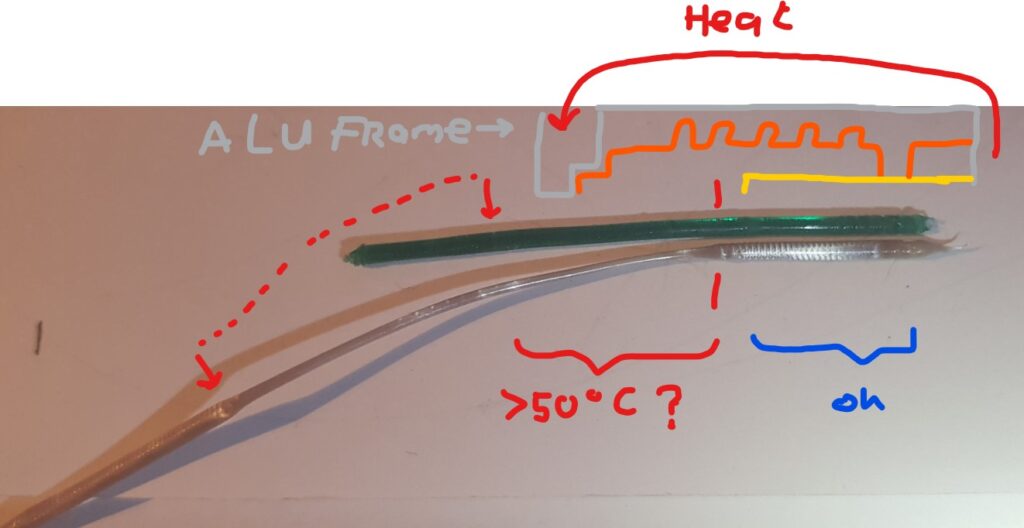 I could try and either cool down the frame more with a more powerfull 40x40 fan, but I don't like that. I could also try and insulate/disconnect the connection between the frame and the copper radiator and replace it by something more heat insulating.

So... I think I should give the none-High-Flow version a try, in hope that it radiates less heat into the black alu frame.

I bought this hot-end specifically in hopes to solve the Summer PLA printing problem, and I'm kinda upset that also this hot-end doesn't seem to be up for it. If I can't fix it this way, I might give water cooled hot-end a try. Maybe people have some other idea before I add a heavy water block to my print head?

I tried the Dragon for a while and, although there were no jams, I had another problem: When I proceeded to change the nozzle, it was stuck to the bottom of the heatbreak. No filament leaks at all,  just metal bonded with metal. The nozzle was nickel plated copper and the heatbreak, I assume, a copper alloy.

Possibly the accident had nothing to do with the Dragon, I don’t know, but the result was a destroyed nozzle and a destroyed heatbreak, although I could recover the heater block unharmed.

After that incident, I forgot the Dragon and purchased a Mosquito hotend. This has been the best upgrade I never did on my Prusa.  Goodbye forever heat creep or jams; easy nozzle changes; smooth filament flow and, best of all, the thermistor/heater cartridge wires go straight from behind towards the cable bundle, instead of the V6 stock hotend where the wires come from the side and have to make a 90º sharp bend towards the cable bundle. This is an absurd design by E3D and a recipe for disaster, if anything goes wrong, A small blob entrapping a wire or a wrench skipping when changing a nozzle = thermistor and/or heater cartridge destroyed.

Update on my (Tri-Lab) Dragon Hot-End High Flow not that it is getting summer here and the Dragon needs to prove itself if I can keep printing PLA witch I could not with the standaard E3D V6.

Sadly... No... This Dragon Hot-End also is unable to print ANY PLA prints for me in elevated ambient air temperatures (currently 32°C).

Looking at the pulled out filament, it seems it is again the black frame that gets to hot (~56°) at the entry point where the PTFE stops. So its kinda the same issue as what I had before I modded the hot-end.

I'm now planning on trying one last mod. And that is to drill a hole in the top of the dragon black frame, so that I can do 2 thing:
1. Push the PTFE tube all the way up against the syringe tube start.
2. Making the hole is the black frame a bit bigger then the PTFE outer dia, so that the PTFE hopefully doesn't come in contact with the hot frame, keeping the filament colder/stiffer before entering the syringe tube.

I have the standard and it works perfectly (I also changed to a 50Watt heater cartridge to get more power). The HF version is made to replace a volcano and therefore is for big nozzle diameters and layers to melt as much as possible in a short time. Could it be that it is a Dragon Hot-End High Flow problem? Did you also try the standard flow version?

You could also contact the seller if you think it is a problem from the hotend.

I have tested both high and standard flow versions.  Both work for me.  I have not used a 50W cartridge with either.

To clarify, the Dragon High Flow does work also good for me, just not with detailed parts while in an ambient temp of >30°C (Summer time). Just like the E3D V6 also had this problem. Difference I noticed though is that my problem with the Dragon HF now seems to be heat creep through the frame.

I think your have a good point with the High-Flow having working good with high feed rates, but can add to this PLA summer problem on really low feed rates.

I now have ordered the standard version as I think that wil have a lot of effect. I will be satisfied if I can print PLA with 0.05mm layers, with a 0.25mm nozzle, during a >30°C summer day. Thats what I have been far from able to do thus far what really frustrates me.

@Artur5 I have looked at the mosquite, I really liked it at first when I saw it, but the more I looked at it the less attractive it seemed to become for me. Its not a drop in, it has an odd shape requirement. The cooling area seems a bit low to me while having the cooling fins also not in the most optimal locations. And then there is the price together with "glueing" in you heater/sensor permanently.  And some reviews also mention the same heat-creep problem  (PLA+Summer+Slow/detailed print = Jamming). So I have not dared to throw some money on it. Even now I would rater move to liquid cooling cause I'm pretty sure that that guarantees me to be printing my PLA detailed objects during summer day's.

Thank you for the clarification. I only print with 0.4 and 0.6 nozzle. I had an ambient temperature between 25-32 degrees (depending on the filament type, 25 for PLA). There I didn't have any problems. As soon as it will be hotter in my country (June - August) I can compare it to the winter time. Since I will print mostly with 0.6mm or even higher in the future (for prototyping), I should probably not experience any problems because of higher feed rate (compared to 0.25 nozzle).

Wish you good luck / success with the standard flow as soon as it arrives 🙂 It would be kind if you post an update with the 0.25mm nozzle and standardflow, I would be interested in the result (thank you in advance 🙂