Ever since I completed the MMU, my print quality as dropped significantly. Before the upgrade, I used to get near perfect prints without having to modify the default Slic3r settings, but now my prints are completing with very visible defects between layers. I have attached some photos to show the problem.

I am using Hatchbox PLA, with default filament temperatures and I am running the bed at 65 C because I have found it to be the perfect temperature to maximize bed adhesion.

Any Ideas on how to fix it?

I would first drop print temperature to maybe 205 to reduce stringing, which might actually remove the other problem as well. If temperature is too high, blobs tend to form below the PTFE which leads to uneven extrusion or blockage. If unsure, print a temp tower and pick the lowest possible temp + 5 degrees.
The second big problem-maker seems to be gear tension, dialing it in properly improved my prints massively. It does not help at all when tension is too high! The gears bite away into the filament leading to uneven extrusion or even blockage. I just print a solid slab at 0.3mm and reduce gear tension until the filament slips, then increase it again 1-2 turns.
Then maybe check your X and Y belt tension. Sometimes the belts settle a bit and banding is one of the symptoms.
Settle for a test print, I use the 0.1mm Marvin on the card. Get that right before trying your own models.

I get bad web effect also ...and only since MMU upgrade & latest firmware.
Prusa suggested dropping PLA temp to 205 ...but has made little difference... I have just tried PLA at 200 and the same...
Bed Temp 55

The issue must be with retraction or something in the firmware for others to be getting the same problem...

To be honest I haven't done many multicolor prints because I'm still struggling with other problems. However, this problem with underextruded layers always happened to me when the filament diameter varied. Actually I encountered it yesterday with a brand-new spool of Prusa PLA I wanted to test. I measured the diameters and they varied between 1.72 and 1.80.

OK, I had some time to start a MM print and I'm seeing the same behaviour with underextruded layers (minus the stringing). This definitely wasn't a problem with the last firmware.

Someone else here (can't remember who, sorry) suggested reducing retracts to 2.8mm with retract speed 40mm/sec and 20mm/sec deretract. That fixed it for me, although I have stringing now. Maybe I'll drop the temperature another 5 degrees or increase retract length a tiny bit. Anyway, the result is not bad. Infill looked good as well. 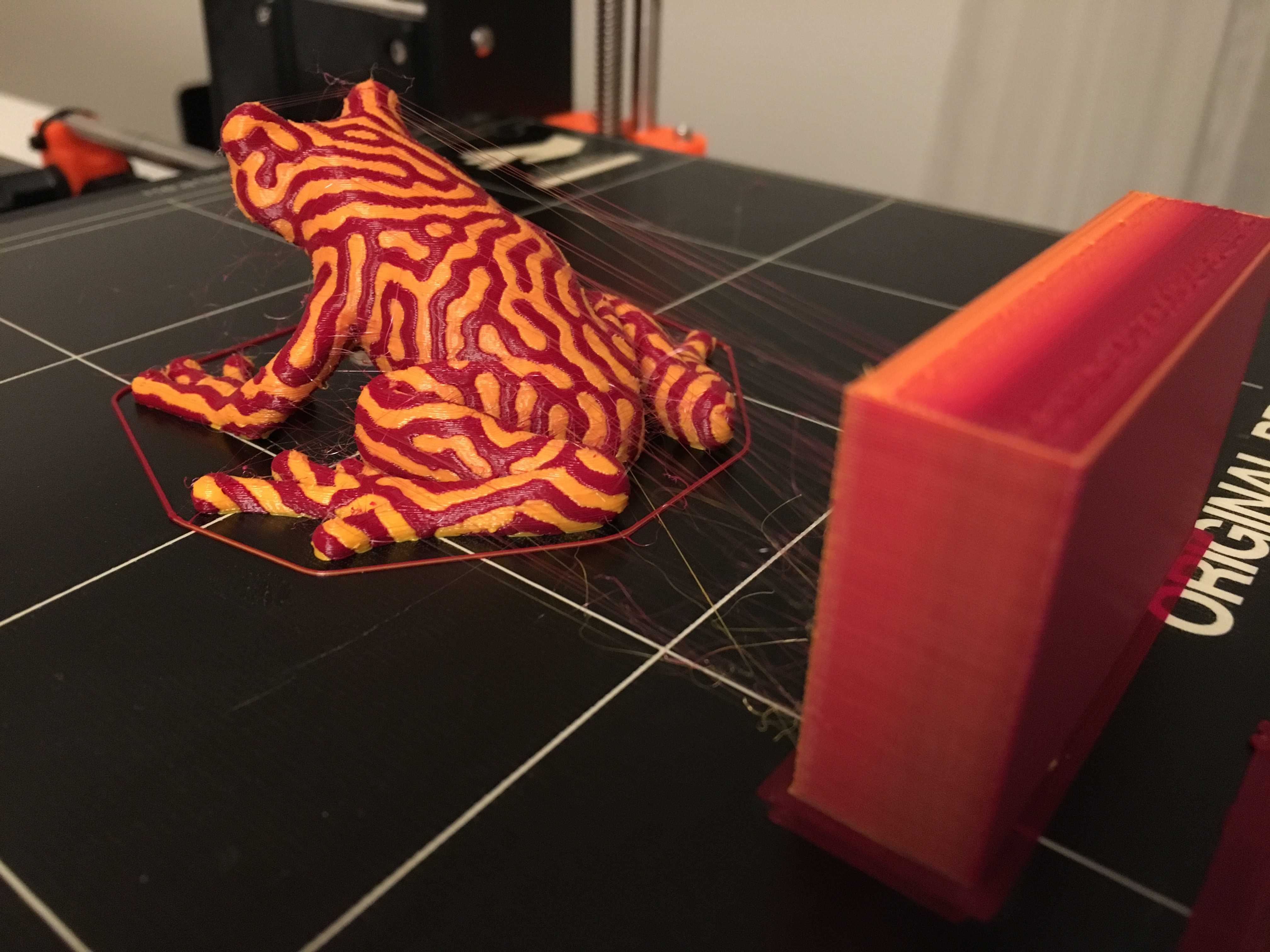 Now I'm happy. And even my ABS print with easy ABS orange from Prusa are happy. Today, my MMU has change in the best way. Thanks to illusion316 ! 😀 😆

Will do further test in the next days and report them.

I think I have a similar problem.
First I thought it had to do with a previous release of Slicr, but after update to the latest, there is no difference.

I use Prusa3D Slic3r MK2 MMU, in the single material mode. I use the PLA filament that was sent originally with the MK2S printer,
To start, I never had serious problems before I added MMU. Also, I printed Marvin in Multi Material, without a problem. But When I wanted to print more at the same time, I got stringing.

What catches the eye, is the incompleted ring around the object. See the picture below. 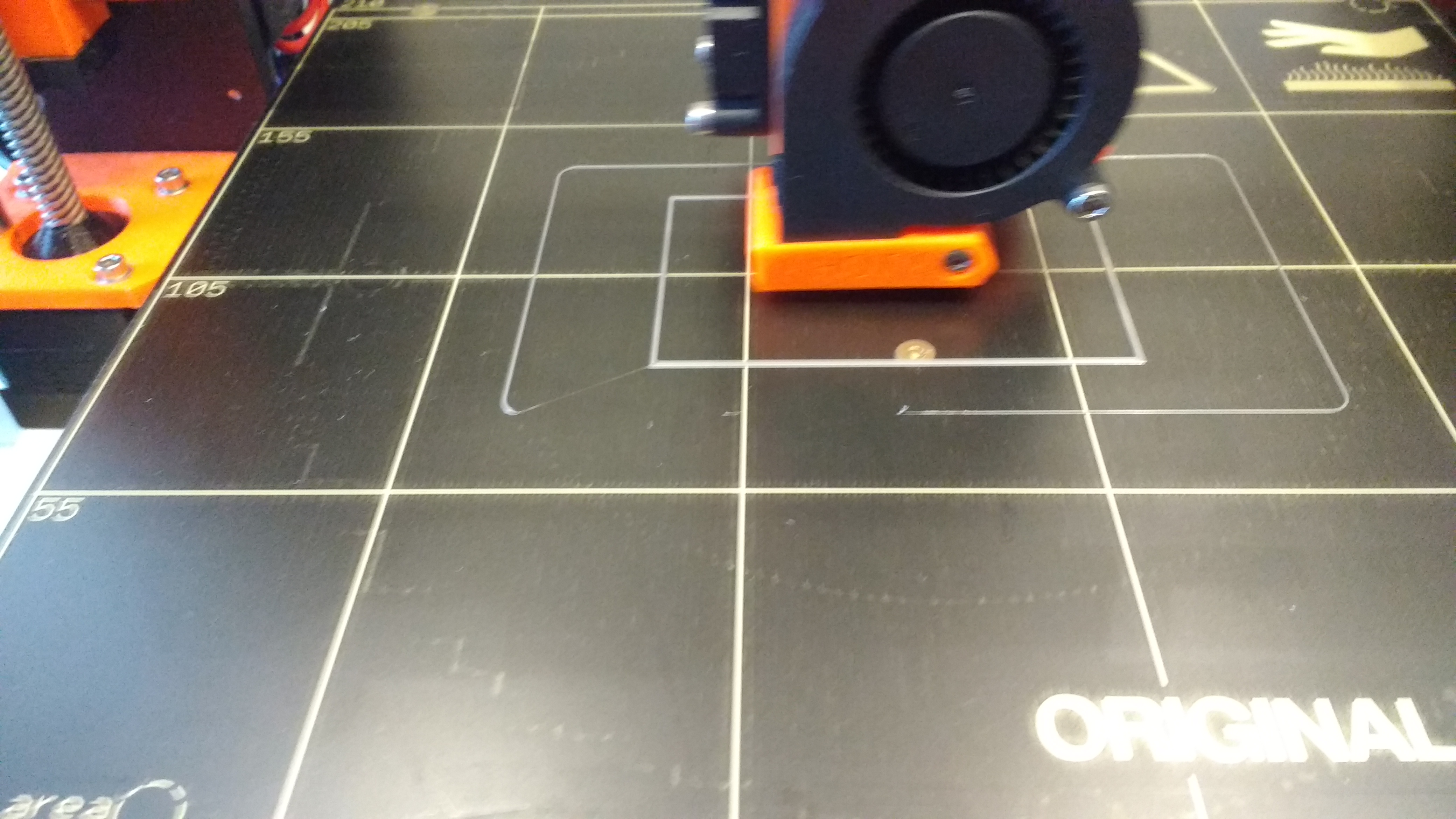 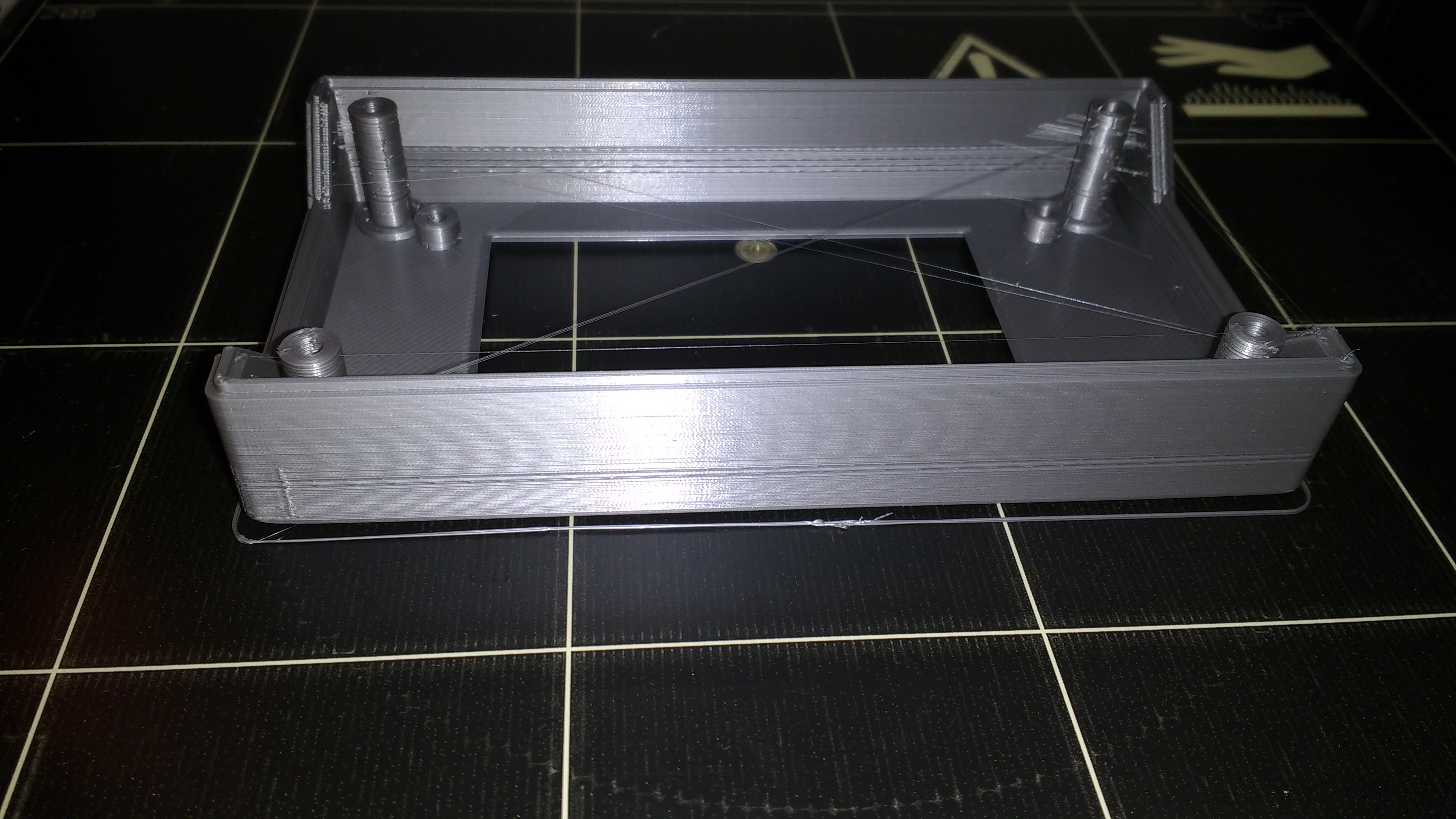 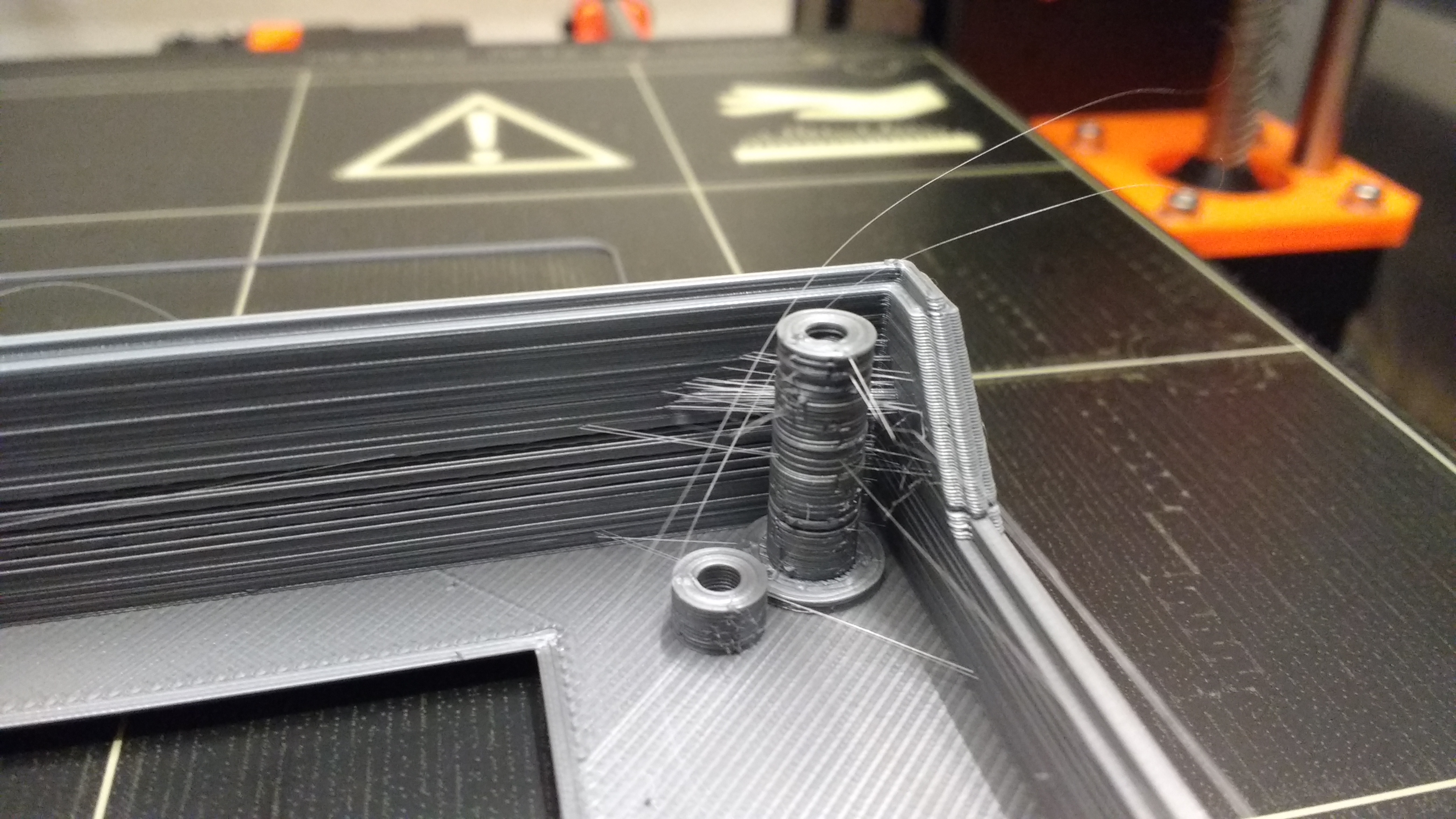 The rests that are used to mount a screw, are verry weak. It seems like material is missing.

Now I'm happy. And even my ABS print with easy ABS orange from Prusa are happy. Today, my MMU has change in the best way. Thanks to illusion316 ! 😀 😆

Will do further test in the next days and report them.

Thanks jean-marie.p ! Currently doing a test with reduced retraction length / retraction/de-retraction speed settings as you describe it. Curious to see it's influence!

Short update: no improvement - except stringing. Went back to the orginal settings!

I've noticed a couple things when it comes to stringing and missing layers like in jason's post. This has happened a few times since I got my MMU but I also had a similar problem before as well.

For those of you who aren't able to fix the problem by changing the retract settings, read on:

First off is feed path resistance, which can cause both of those problems. If there is a slight resistance during retraction, it doesn't fully retract the filament, and the plastic left in the nozzle will string. If the resistance happens during extrusion, then there may be missing layers, I found it often printed my infill but missed the perimeters, and therefore still completed the print, but caused problems with the final result looking like crap.

Before I got the MMU, it was due to a partial clog in the nozzle, but after the MMU I found that it was mostly the feed path in the Multiplexer itself.

My best advice is to make sure that there are no obstructions in the multiplexer by unloading all of your filaments, unscrewing the multiplexer (just one screw) and removing the PTFE tubes (push the blue ring into the brass and pull on the PTFE, it may resist but if you use a little force while making sure the blue ring is depressed, it should come out fairly easily). After you remove the tubes, take a piece of filament and cut the end at an angle just like you are about to load it into the extruders and push it through each of the feed paths in the multiplexer. If you notice any more than slight resistance in any of the paths, then this is likely your problem.

Even one partially blocked path can cause a problem for the others since there is no sensor to see how far the filaments have retracted. The Rambo board just tells whatever extruder that it needs to move a certain distance, and then when the motor has "tried" to turn enough, it moves on to the next command in the gcode. If there is still a little filament stuck in the combined feed path, then it will cause resistance for the other feed paths, and the problem compounds.

One thing I have noticed that can help this is making sure that you promptly unload the filaments after each print, even if you are using the same colors for the next one. If the filament dries in a bulbous shape, at the end, then it can be a pain to remove the next time you go to print, or it may seem like it's working fine and then cause problems in the middle of your next print because of the reasons I mentioned earlier.

Sorry for the long post, but I think that might help at least some of the people having problems with print quality and/or stringing issues.

That is exactly what my prints looked like when I had a clogged nozzle. It could technically be any resistance in your feed path though.

in regards to the filament strands what seems to help for me is to set the "extrusion multiplier" under the filament settings then the filament of choice to .93 instead of 1. but i also had issues with this on the default slic3r settings.

@Seth.
I cleaned the entire system, except the nozzle. In fact, everything was clean.
The problem remains.

What keeps popping up in my mind is the fact that the first printed ring around the object is not printed completed. The nozzle has moved a couple in cm, before the PLA comes out. See my first photo for an impression.

Another observation I made is the the gears are often pushing the filament in and make some kind of a snapping sound.

The snapping sound is the extruder and is due to feed path resistance, and is common during the initial filament push because of the increase flow, however if it continues to happen during your print, then you have either a clog in the nozzle (remove with the supplied needle in the original kit after heating, there are topics that already cover this process).

Otherwise, you will want to see if your multiplexer has feed path resistance. Remove the multiplexer and the PTFE tubes and push a spare piece of filament through each feed path. This should be EASY to do, if there is any resistance, that could be the source of your whole problem.

If it does have problems, there are topics to fix it, or you can print a new one like I did (check monoplexer and multiplexer redesign topic).

Good luck to you!

Did you ever get a fix for this? I'm having the exact same problems since the MMU upgrade and can't seem to get things dialed in. The ring around prints starts late and wont stick. No matter my z height I'm suddenly having issues with nothing sticking and it looking like not enough filament is being extruded. Sounds like same issues are you are having.

Did you check to see if slic3r is throwing in an unnecessary retract after the nozzle purge? It's a bug that is not fix in the version prusa links. It basically sucks the filament in 4mm after the purge but doesn't return it to zero before it starts printing. Makes your skirts run dry for a bit till the filament reached the tip of the nozzle.

That's the kind of info i was waiting for. How can this be fixed? And does this fix the stringing too?

After you tell write slic3r to write the gcode, open up that file in a text editor and put a ; symbol at the start of the line that Nils mentioned.

It won't fix the stringing. I've contacted prusa support a few times to see if I'd get different answers but they always say there is no fix for the stringing. I've found I can minimize it by reducing the nozzle temp, reducing retraction length and reducing the z lift on retract. You will have to experiment with your particular setup and filaments but I've found it extremely sensitive to those three variables and not much to the others. I think for atomic pla I use I'm running 2.8mm retract, 195c temp and 0.1mm z lift. Stringing isn't gone but it's fine enough now that it somewhat easy to clean off the print afterwards and doesn't cause prints to fail.

There is a stringing test print that helps me a lot on thingiverse. It's called something like "economical fast stringing test" or something. Takes about 3 to 4 min to print and uses very little filament. I usually go through a few dozen of those on each new filament trying to fine tune the retraction parameters.