Hotend not heating up past 225.

Hotend not heating up past 225.

About two months ago i installed the mk2.5 upgrade. everything has been fantastic.

Today is the first time i tried to print above the 220 degree range.

I just sent some gcode with the temps 235 as my printing temps and it's currently printing, but the temperatures are 225/235 (Actual and Target).

It's ten degrees under target and will not go to target.

I've double checked my gcode, tried rebooting the printer. I don't know what to do. i've tried to use the tune feature to set the temp. tried to set the temp via octoprint. no matter what i do, i can't get the hot end to raise to target temps above 225.

Any help would be great.

I would try flashing it again, this just seems like a software issue to me not a mechanical issue, could also be the mainboard itself is the issue though.

I would try flashing it again, this just seems like a software issue to me not a mechanical issue, could also be the mainboard itself is the issue though.

I re-downloaded and flashed the same firmware. manually set my temp as a test and it heated to 235 just fine. now i'm starting a print using the same gcode as before and so far it's pre-heated to 235 as it should. it seems to have been fixed via the firmware update.

I'm very happy this is not a hardware issue. i was worried it may have been an issue with my hotend wiring or the board. i'm half way through my first layer and it seems to be holding temp really well.

EDIT: After a few layers the temp has dropped down to 224. i honestly don't know what's happening. target temp is still 235.

I guess i'll stop this print as well. I think i'm going to try printing via SD card and remove octoprint to see if it's limiting the printer somehow.

I tried printing via SD card and unplugging octoprint.

It printed at 235 for the first layer just fine. but once it hit layer 2, it cooled down to 225, even though the target temp on the LCD still showed 235. I'm really confused now. is it a firmware issue, or gcode? or what?

Should i upload the gcode file? not sure if it may have some answers. i'm still rather inexperienced when it comes to reading gcode. but the M104 commands look correct to me.

I had a similar problem a while back, it looked liked my hotend would never go past 2xx while printing. yet it worked perfectly fine while preheating standing still. In the end, it was a wire break in the thermistor wire: while in home position the wire still had contact but when the wire was bending during print, it lost contact. Might even be a thread still here on the forum incl. my temperature graphs, which looked pretty "wild".

Long story made short: since you got octoprint running: preheat, start jiggling the wire bundle around and watch the temperature graph, this is how i eventually found what was happening.. When i wiggled, the temperature changed.

Long story made short: since you got octoprint running: preheat, start jiggling the wire bundle around and watch the temperature graph, this is how i eventually found what was happening.. When i wiggled, the temperature changed.

I'll give that a try, but l'm skeptical that's the problem. but i'll try it just to see.

The reason why i don't believe that's the issue is it heats up just find, but the second the print goes to the second layer, it starts dropping back down to 225 from 235. even though the target temp is still 235.

Not sure if i'm allowed to link instagram here. but i poorly shot this timelapse showing the temp drop yet the target temp remain.

Yeah, looks just like what mine did.. here., i found the old thread, look at the temperature graph.. set temp remains at target temp, but actual temp drops for no reason every few minutes..

Of course, could be something completely different in your case, just keep this in mind as a possibility.. i didn't think it possible either and was struggling for days.

Would be a weird break in the thermistor wire if thats the case, when mine broke it just went mintemp error and that was that.

You could of course test this fairly easily, if it seems to get to 220 fine as you say then just try to print something small like a marvin or something at 220, if it stays dead steady at 220 for whole print then safe to say its not the thermistor wire.

The printer works fine at tempts 225 or below.

The very second the second layer starts printing it drops to 225. Yet the lcd still shows the higher target. And the tune feature won't force it to raise.

If it's a wire, why does it heat to 235 for the first layer, then drop instantly at the moment it starts the second layer?

I'm about to try a different slicer and see if for some reason slic3r is the issue.

I just sliced the same STL using Simplify3d. same exact issue. So it'll heat up just fine to 235. print the first layer, then the very second it goes to print the second layer the temp starts dropping to 225. no idea why, or why 225 specifically. but it does. it stays at 225. even though it still shows the target is 235.

So, it's now happened via both slicers. and without my octoprint even plugged in. so it's not the slicer, unless they both started doing this, which is unlikely. or it's some temp limit i'm unaware of.

Maybe it is the wire? i mean, i don't understand why a hardware fault would only happen on the layer change.

I'm so very confused. This entire situation started as i was having trouble finding the correct temps to print a new filament i got. and now i can't even fix that problem until i fix this one. Annoying.

Any help would be appreciated.

That seemed to have the exact effect you suspected. I told Slic3r to Disable fan for first 2 layers. The temp of 235 held until the VERY start of layer 3.

As a test, on layer 3 i sort of gently put my finger against the fan to slow it down a bit and the temp started rising from 225, where it went down to, back up until it hit 3230, and i stopped touching the fan as i didn't want to damage it.

So, Knowing that. What do i do in regards to slicing in the future? I've never really ever messed with fan cooling when slicing objects in the past. i pretty much only ever printed with PLA and not above 220, so what do i need to know in order to slice and print this stl successfully at 235?

Thanks for that advice. it's a relief to at least make some progress and pretty much rule out a pricey hardware fault.

Here is an image of my current slicer cooling setup. other than changing the layer start from 1 to 2, it's what i use for every print. 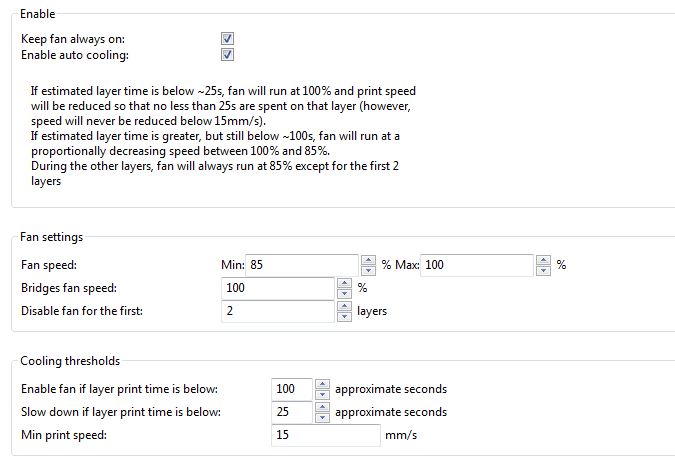