I'm not a Prusa owner so I think I'm kidda neutral, it seems to me that the majority of vociferous posters are experienced users. Is there something inherently different about genuine Prusa's vs Ender3 et al. I wonder if it's a case of different habits rather than bad habits.

Is there something inherently different about genuine Prusa's vs Ender3 et al.

In my opinion yes.  I use a variety of printers.  There are good printers outside of Prusa, but in general, it is not from Creality.  Lutzbots I have used at a friend's house is fantastic.  His Ultimaker is quite good also.  Then again, they cost much more than a Prusa and are more on part with the XL.

The Ender as with much of the printers out there is more of a tinker printer and support is near non-existent.  You can get them to print, but it is going to take some effort.

With Prusa, it is more than the printer.  It is the community.  The forum is a good source of support but the support from Prusa is world-class.  Not all of my experience with Prusa has been excellent, but it had been much better than the two Crealitys I own.  I have purchased 3.  One Ender took me a year to get to print reliably.  My CR-10S was donated to a local school.  My Cr-10S pro failed to print out of the box and it still took them 3 weeks to replace.

I just purchased a new printer to print a project for a customer.  The SeeMeeCNC is a different class of printer.  I suspect it will be better than a Prusa (maybe).

I am not wondering, that some people are really disapointed about this printer for this money.

Really painfull as support did not provided any solution in 5 days of communication.

I am disapointed, too.

Are you using Chat?

I am not wondering, that some people are really disapointed about this printer for this money.

Really painfull as support did not provided any solution in 5 days of communication.

I am disapointed, too.

Are you using Chat?

No, only Mail. I try Chat. Thanks

If you have trouble with Z-axis (threaded trapezoidal rod) movement, then your Mini probably isn't assembled correctly -at least that was the case with my semi-assembled Mini+. Try the following:

First see here . Trapezoidal nut has four holes, but only two bolts are used. Take a look into empty holes (without nut). Do these two empty holes have a thread inside?
If there's no thread, then do the following:
1. Unscrew both bolts
2. Rotate trapezoidal nut by 90°and now insert bolts into holes without thread
3. Do not fully tighten the bolts! -trapezoidal nut must have a little "free play" horizontally. Tighten just enough, so trapezoidal can't move vertically.

If you can see thread inside empty holes, then just lose both bolts a little (see step 3 above).

Posted by: @bogdanh
3. Do not fully tighten the bolts! -trapezoidal nut must have a little "free play" horizontally. Tighten just enough, so trapezoidal can't move vertically.

This! I over-tightened mine when building my kit. After finding the tip on the forum here about loosening it, that resolved my self test fail on Z axis. I probably need to go back and loosen it a bit more even. It's surprising how loose you need to keep these if you are new to the printers.

Wasn't able to send it back, so here we go troubleshooting again. I'm getting lots of stringing, blobs on edges, and insufficient top surface filling. Some places maybe it's starved for filament, but others show overfill? This filament prints perfectly on my MK3S. I'm not sure what I'm doing wrong. Any suggestions out there? Cheers 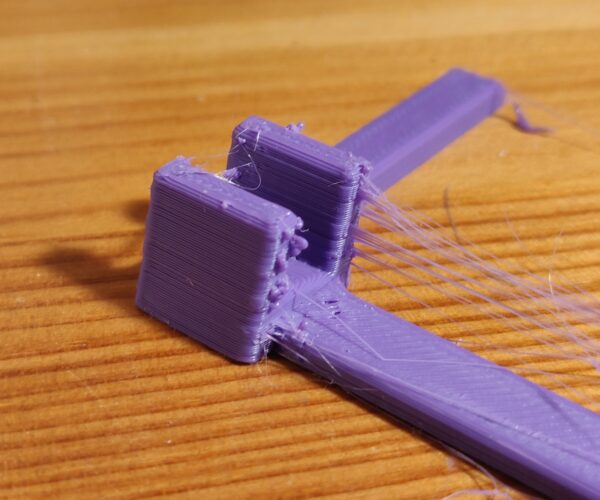 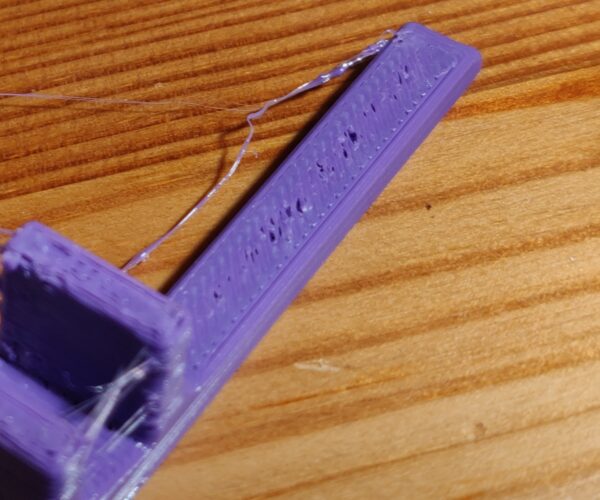 Put the same filament on your Mk3, print the same part and show us, it should be instructive.  DO NOT post one you printed earlier.

Note: My Mini was preassembled at Prusa (minus the assembly one has to do upon receipt).  I upgraded the nozzle to a clean tip nozzle from MatterHackers and upgrade the extruder to a Bondtech IFS extruder.  I did those upgrades in response to the poor quality I was getting, but neither made a difference.  Thank you. 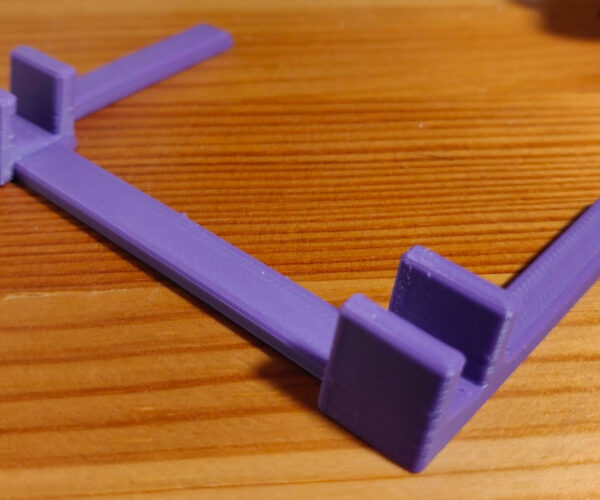 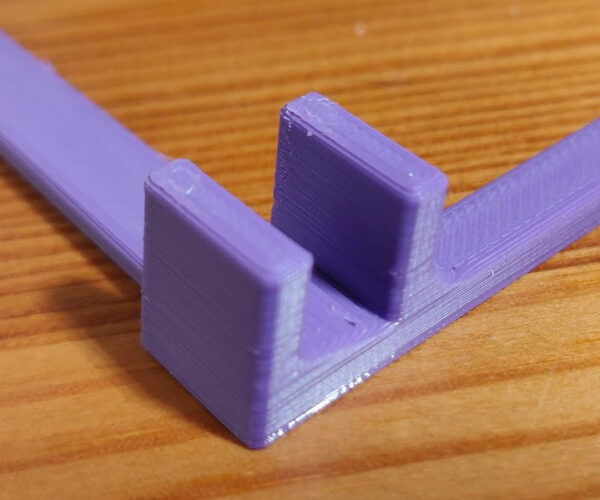 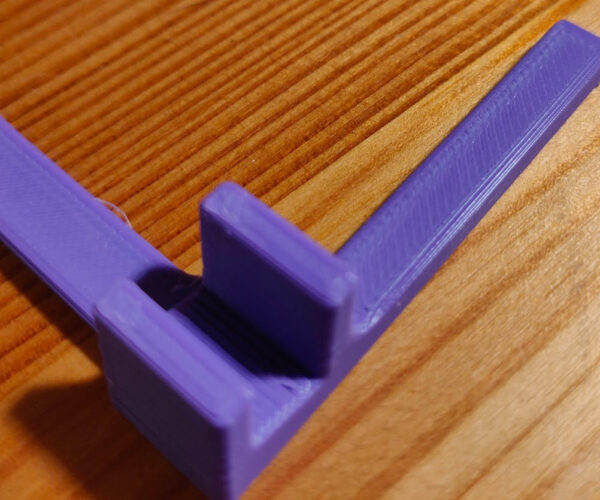 OK, there are some signs of damp filament but it's not as bad as I feared.

I don't know your extruder/nozzle combination -- anybody..?

I would suspect a too high printing temperature - and your belts might benefit from calibration; have you printed a tension meter?

I'll print a tension meter and use it to check the Mini.  Thank you for that.

Note that I'm using PETG and the default settings for Generic PETG for both Mini and MK3S prints in the latest version of PrusaSlicer.

Yes, this purple filament is a bit old and I was trying to use it for something to get rid of it.  However, I did have the same issues on new PETG filament on the Mini.  The dimensions are just not as tight and the edges not nearly as clean as I get with the MK3s.  I have messed with the retraction and other settings without success.

I'll print and use the tension meter and follow up with another print on the Mini to see if that helped.

OK, the tension tool looks like it's within the nominal tension tool for my Mini, though a bit closer to the MIN side. 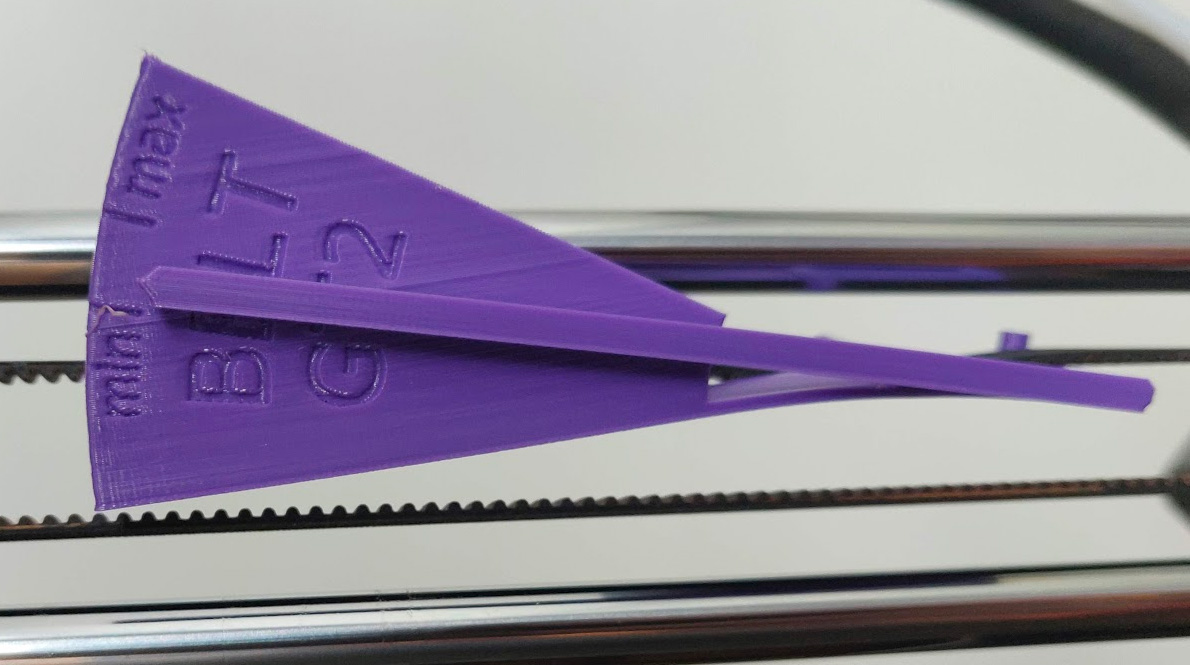 Lowering the temp to 230 C throughout the whole print (default is 230 C first layer then 240 C) seems to have helped to an extent.  I printed the file again and it looks good.  It's a different filament, but historically produced the same issues as the purple filament.  So that's encouraging that one print is good.  However, when I went ahead with the same settings for a bigger print, a simple phone stand, more of the same issues returned.  The top surfaces are rough and have holes.  The layer adhesion is pretty bad, with the phone stand basically crumbling in my hand.  No strength.  My MK3S produces the phone stand with default settings without issue.

Maybe I was too aggressive on the temp reduction (could drop 5 C instead of 10 C).  But the layer adhesion has been a problem on the Mini, as well as that gnarly top surface issue.

I'll try that retraction adjustment next and post back. 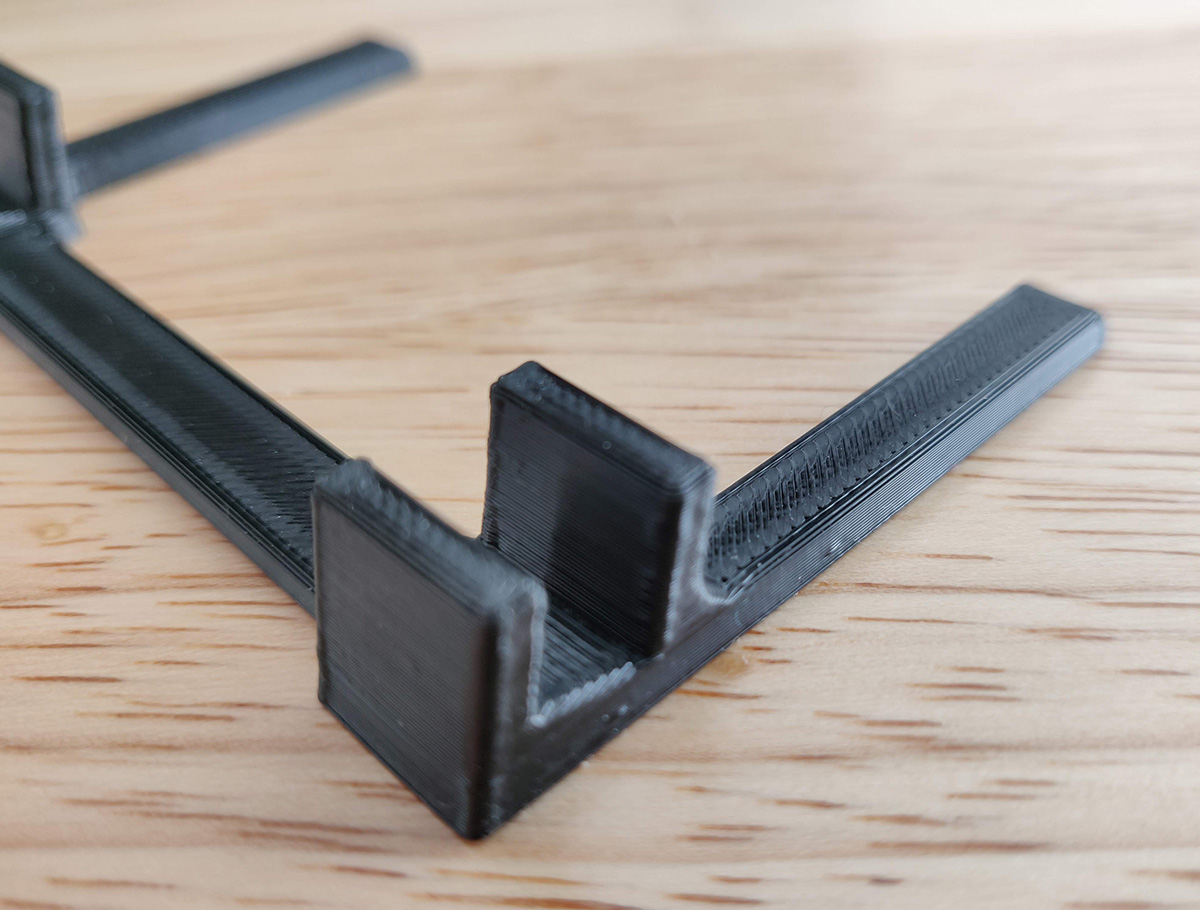 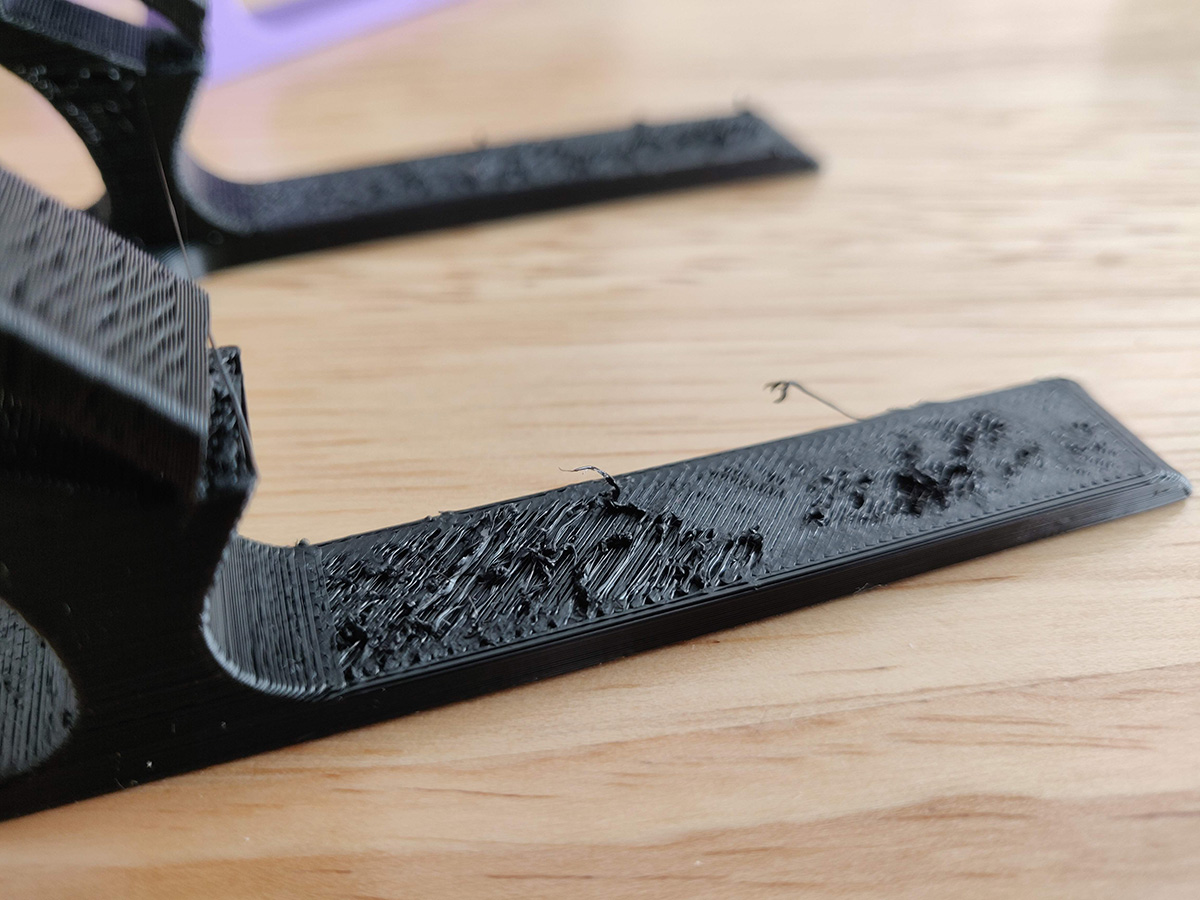 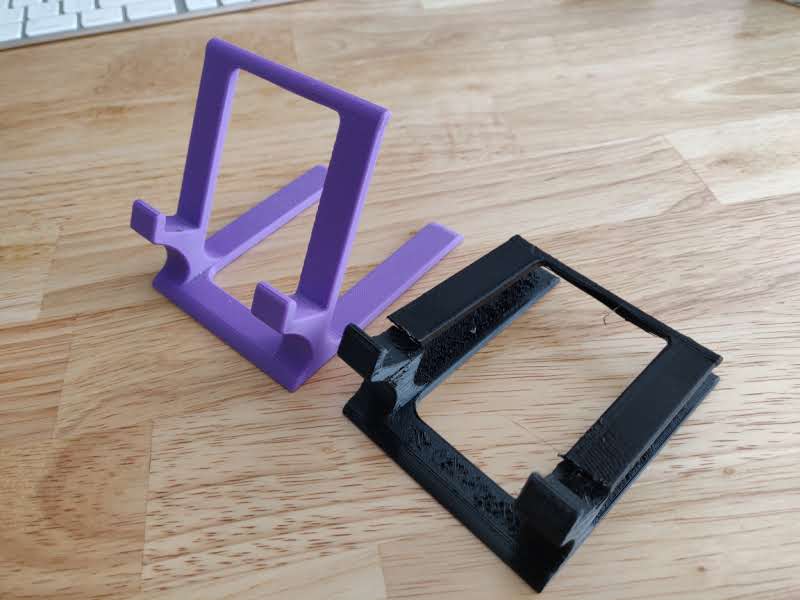 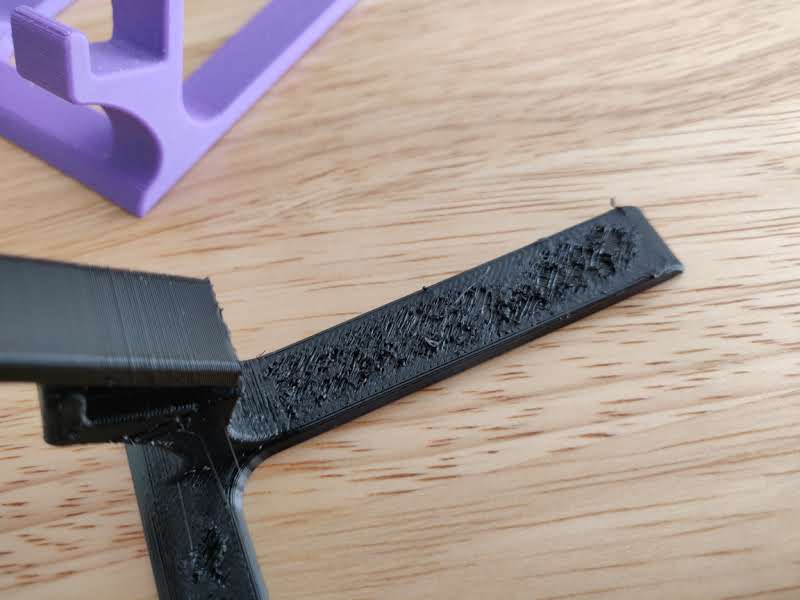 Ran the print with 2.0 mm retraction and 235 C after the first layer using black PETG (generic PETG settings otherwise).  The stringing is rampant and the poor surface quality is evident. 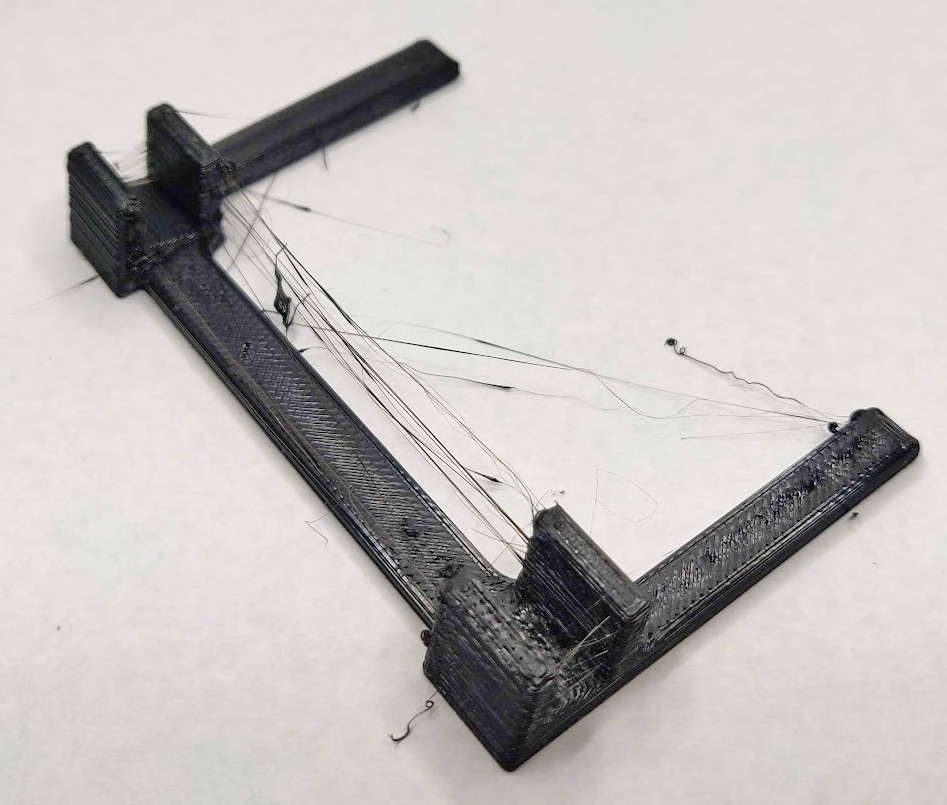 I own a Prusa I3 Mk 2.5s which I upgraded from a Mk 2.  An Ender 3 which has been heavily modified, and a Prusa Mini.  The printer that has caused me the fewest issues is my I3 Mk 2.5s, it just prints, and prints, and prints.  Both my Ender 3 and My Mini have cause me problems that have resulted in serious downtime.  For both printers it's resulted in a learning curve on my part to diagnose the problem and then resolve it.  Right now I'd say my Ender 3 and my Mini produce equivalent quality prints, but then I upgraded the Ender 3 to a 32 bit board, a Build Tek bed surface and an EZABL Pro bed leveling system.  I probably have more money now into the Ender than I do in the Mini.  What do I get with the Mini that I don't get in the Ender?  A printer that came with all the bells and whistles from the start, a knowledgeable community and factory support.

There are reasons why both the Ender 3 and the Mini are less than half the price of a MK 3 or the XL, they were designed for different roles, the Mini was designed to be a print farm machine for Prusa to print all their printable parts on and apparently it does that well.  The Ender 3 is an entry level printer that requires a lot of work to make as convenient as the Mini.

The only real problem I've had with my Mini is the PTFE in the hot end seems to shrink after a few hours of printing and can lead to jams.  I hope I've solved this with the Bondtech heat break.  For now the printer is working beautifully since I put that in, I hope it holds.  Even if it doesn't hold I think I now know enough about the machine that the next time I have a problem resolution will be quick.

Lastly I want to say that 3D printing hasn't reached typical consumer level yet.  It's a hobby that requires a tech savvy user who is willing to get their hands dirty and learn not just how to print but why printers do what they do and how to deal with the myriad of things that will pop up.

I just tried to reproduce the good print I got with the 230 C setting (instead of 240 C) after the first layer and it came out pretty badly.  Same surface quality issues and incredibly weak layer adhesion.  It broke from just being removed from the build plate.  It's incredibly frustrating since the exact gcode file with the same filament produced a good print just 2 days ago.

So, to recap, reducing the temp did not help (consistently) and changing the retraction to 2 mm did not help.

I still have very ugly looking prints from a dimensional stability, strength, and surface quality perspective.  The same filaments work just fine on my MK3S.  I'd hope that the Mini+ isn't so finicky with relation to the brand of filament.  Like it will only work when using Prusament?  I hope not.

I'm back to square one.  Going to print a Benchy with the default Mini+ Generic PETG settings and will post that later.

Thank you everyone that has tried to help troubleshoot with me so far.  I'm very grateful for your insight.

I went back to see where you were with this thread and you state you changed out the extractor to the Bondtech.  I've read about that procedure and it changes too many things from a stock printer for many of us to advise.

So rather than speak on the Bondtech I'd suggest you check your feed rate, this URL describes the process https://all3dp.com/2/extruder-calibration-6-easy-steps-2/

It'll be helpful to know if your feed rate is within spec or not.  You may need to change your feedrate for the Mini.

The extruder calibration showed that my Mini was under extruding.  The instructions for the Bondtech IFS extruder states to set the extruder step rate to 415.  Using the instructions Bob supplied from all3dp.com, I ended up setting the extruder step parameter to 430.  It has worked very well on multiple prints.  Layer strength has improved and the surface quality is much much better.  I'm going to continue to print and see if any of the issues reappear.

Thank you to everyone that has assisted.  Hopefully I'm out of the woods on this one.  Cheers. 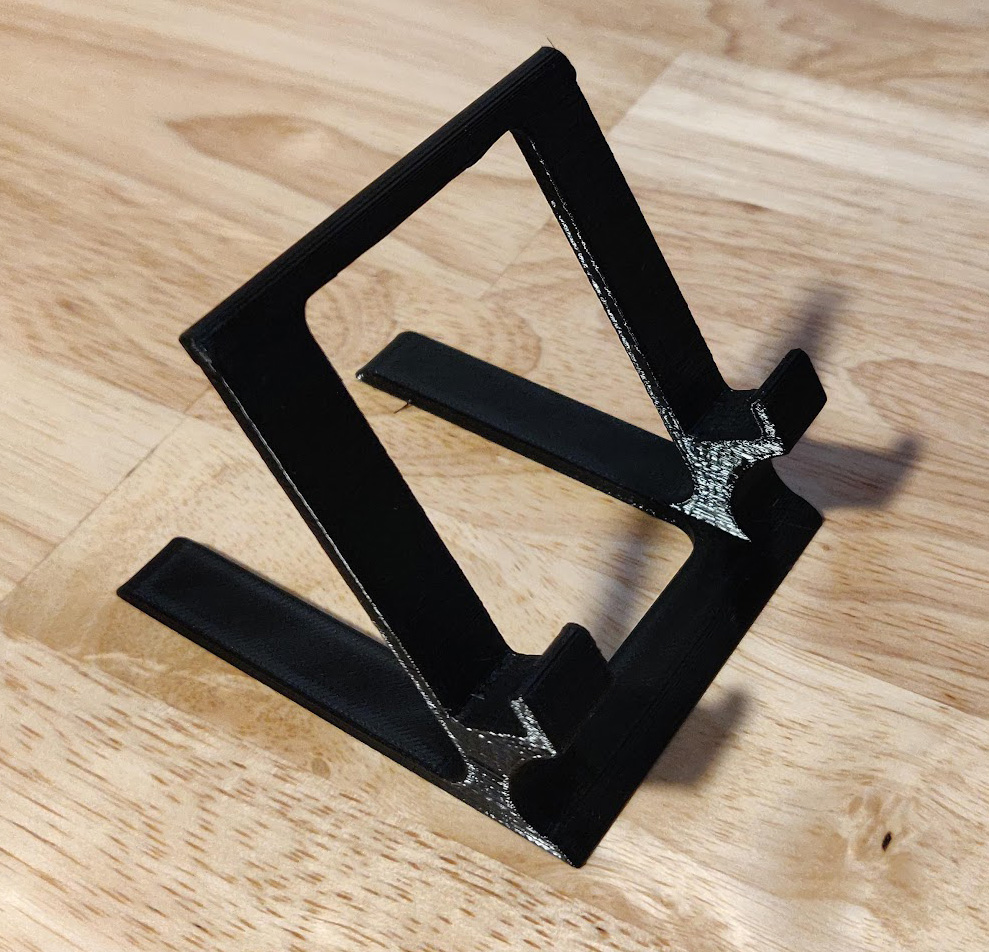 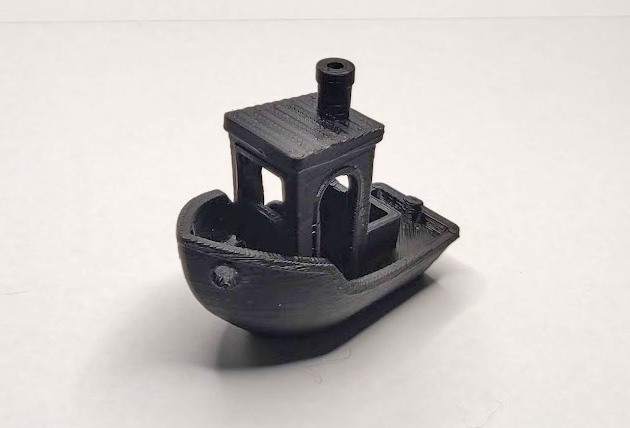