I'm still at the point where I'm picking up or learning an obvious feature for printers or slicers a few times a month. I just found out that I can create physical printers in PrusaSlicer and send the GCode directly to them, through OctoPrint. (My printers are not close enough to the computer for a USB cable, so I can't connect them directly to my Mac.) I have a Prusa MK3S+ and an Ender 3 Pro and both are hooked up to a Raspberry Pi running OctoPi, but set up for multiple printers. I'm using PrusaSlicer 2.50 on my Mac.

When I first set up a physical printer, I clicked on the small gear icon under the Printer Settings panel and added my Prusa without a problem:

In the setup window, I specified to use OctoPrint, and PrusaSlicer easily found the Pi running OctoPi and both printers on it, identifying both by name. I also include the API key. From there, it was no problem to send GCode to my Prusa and even sending it to print it in one step. Prusa Slicer clearly recognizes I have 2 different printers on this Pi:

(I don't know if it's related, but there is an error. My LAN is "arda.ea", not "local" although I know most people don't specify a domain for their LAN or just use "local." I doubt this has any impact on this issue, but I thought I'd mention it.)

So I tried adding my E3P as well. I clicked the same icon and hit the "+" near the name I had given the physical printer. (The "o1" on the end is because I do plan on getting other printers after I get my shop set up.) 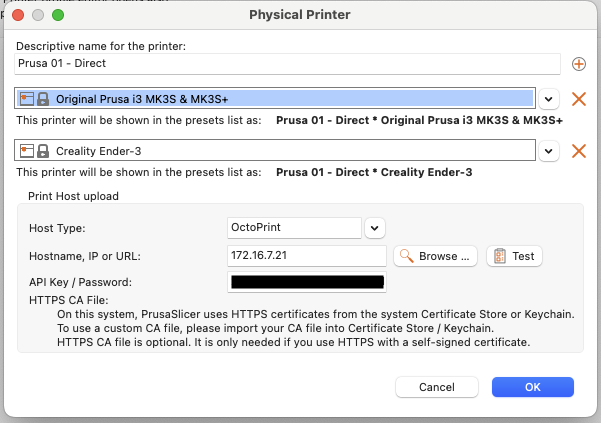 The problem is I don't seem to be able to have more than one name and one printer. If I have two physical printers, they both use the same name, but with different printers:

I have tried different ways to do this and end up either with only 1 printer (always the last one I added), or both have the same name I gave them.

Is there a problem using 2 physical printers with PrusaSlicer, or is this an issue because both printers are on the same instance of OctoPrint, which is basically a hack to get a multi-printer system on any version of OctoPrint? Can I get PrusaSlicer to deal with both printers?

You can not connect a printer via USB to your Mac and use PrusaSlicer to send G-Code to it. PrusaSlicer does not act as a print server. You can only send the g-code file to a print server (like octoprint) and print it from there. So in your case the destination for the file PrusaSlicer sends is physically the same (your octoprint instance) you just use two different profiles to create different code for the the connected printers...

If at first you don't succeed, skydiving is not for you.

You can not connect a printer via USB to your Mac and use PrusaSlicer to send G-Code to it. PrusaSlicer does not act as a print server.

Almost a relief to hear that, since every time I have an issue, people say, "Use a USB cable," and I have to keep pointing out it's too far for a USB cable! (That's why I'm using OctoPrint/OctoPi.)

you just use two different profiles to create different code for the the connected printers...

I may be confused as to exactly what qualifies as a printer profile. I have two printers in the PrusaSlicer System Presets, as can be seen in the drop-down list in the first screenshot. In the last screenshot, there are two physical printers set up, but I can't specify a different name for them and, when I have both connected, I have problems. (One time I was sure I was printing to the Prusa - set it and so on, and the Ender started printing!)

What you have in the last screen shot looks good. Printer Profiles are just the settings you have on the "printer Settings" plane. A physical printer is just a printer profile with a physical address to send the file to after slicing. Just use the right profile to upload the file and then use octoprint to connect to and start to print with the correct printer...

If at first you don't succeed, skydiving is not for you.

Okay. Seems like I'm on the right track, then. I've been working with this and replacing my webcams on each printer with fisheye cams - which means some configuration changes. I think I'm going to have to just reboot the Pi and start from scratch and see if it all works. As I mentioned, I had a few weird things like sending GCode to my Prusa and my Ender starting to print.

To make it easier for me, I was really trying to use that "Prusa 01 - Direct" part of the name to spell out something clear for each printer. Just easier to read. Looks like I cannot use "Prusa 01 - Direct" for one and "Ender 3 Pro - Direct" for the other. Small thing, but it confuses me. I guess, since both are on erabor.arda.lan (the Pi's name on my LAN), I might change that to "Erebor - Direct" since that describes both. It just gets confusing that I can't specify a different name to use for each physical printer. (I get that PrusaSlicer adds the name of each printer profile to the end of my name - it's just a bit confusing that there are 2 parts to the resulting names.)